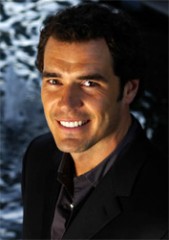 We are pleased to announce our next special guest host, the very talented Dan Payne who will join WHR Sunday May 20 , 2012 6 PM Pacific, 9 PM Eastern time to discuss his human interest topic, science fiction conventions such as his recent appearance at the Creation Entertainment “Last Ride Through the Stargate” event held in Vancouver British Columbia April 27 to 29, 2012.

This is a very exciting interview with Mr. Payne, we will discuss his career as an actor, stuntman, writer and as a father. Dan Payne is known for his many accomplishments including his recent appearance as a zombie in The Cabin in the Woods, Watchmen, A Christmas Story 2, R.L. Stine’s The Haunting Hour, Mulligans and of course his epic roles on MGM Studios hit series Stargate SG-1 and Stargate Atlantis!

Dan is also involved and produced a fun short film named Limey and another series called “Divine the Series“. We include promotional trailers for both projects below for your enjoyment.

While doing research on this week’s topic about the science fiction and fantasy convention circuit, I discovered, that, while there are lots of conventions, there is little in the way of information about the history and culture of conventions. Most non-sci-fi people assume that conventions are something a professional attends to learn more about his or her own particular career. Dentists do it, doctors do it, even educators do it. But do not expect them to know anything about the mecca of geekdom; the  science fiction, fantasy and comic book convention.

If I were to hazard a guess about just when the first convention took place, I would have bet that it was shortly after the very first episode of Star Trek, staring William Shatner, Leonard Nimoy and DeForest Kelly. And, I would be wrong, however, according to Wikipedia, the very first convention took place in 1936 in Philadelphia with an attendance of around a dozen people. There was no mention of a guest celebrity, but I am sure the idea must have followed soon thereafter. 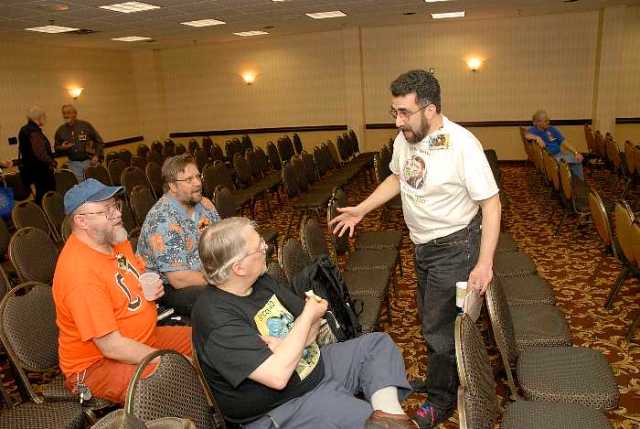 An important distinction can be made, says Wikipedia, between commercial events (often called “shows”) – those run by dedicated companies who specialize in con organization, or by local for-profit firms – and volunteer-run cons.  “Usually run for profit, commercial events tend to charge for “tickets” or “admission” rather than having “memberships”. A primary focus of commercial events is meeting celebrities, such as stars of science fiction TV show and movies, anime voice actors, etc. Volunteer cons, on the other hand, tend to be smaller in scope and more intimate in character. Panels may be more lightly attended, but fans themselves tend to take part in the panels more often.” 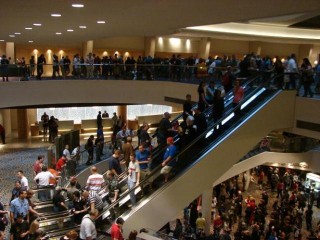 Many conventions add events to their lineup that distinguish them from other conventions. These distinctions are often a source of pride for the convention organizers. For example, Dragon Con in Atlanta runs “Tracks” so that attendees interested in a particular show can follow the shows “track”.

This makes it easier to find the location of the events the fan is interested in. Some conventions focus their entire energy on one particular show. Creation Entertainment, for example, holds conventions in cities in both Canada and the United States that are focused on shows such as Star Trek, Stargate and Supernatural.

The Polaris Convention  in Toronto boasts an event called Klingon Karaoke. Having experienced this particular event, I have to say that it is truly inspired. It seems that people who are made up to look just like Klingons lose their fear of public singing much earlier in the evening than the average fan. In fact, they often begin their Karaoke experience before the official event even begins. Then the DJ is the one forced to try to keep up. 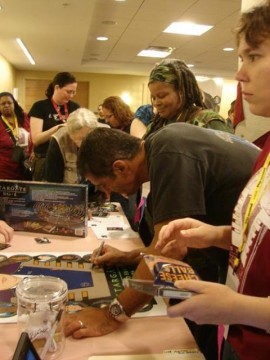 The biggest convention, Comic-con in San Diego attracts such a huge number of people each year, that television networks and movie makers now maintain an advertising budget just for that particular venue. Obviously, someone is doing something right.

Colin Ferguson, star of the hit series, Eureka, recently attended Toronto’s Wizard World Convention. He was asked by Canada’s Space Channel why he attends conventions. “The energy…” Ferguson replied, “…the people. People are sneaking photos, and meeting the fans. Here is where you come to meet the people who watch the show.” What is Colin’s advice for convention survival for actors? “Bring food, in case you get hungry, water, antibacterial wipes and throat lozenges, because you do a lot of talking”.

Scott Bakula, Captain Archer of Star Trek Enterprise said, “Everyone just wants to tell you that they enjoy your work. People who are from the Star Trek franchise will say, “I became a scientist because of Star Trek.”

“It’s really good to connect with the fans, to give them some face time, because they are the reason we are doing this. We have no function as actors without the people watching,” said, Sam Witwer of the North American version of the Being Human series produced for Syfy. What does he get asked by fans? “Bite me. I don’t have any fangs, so I can’t. But it’s what I get asked.” 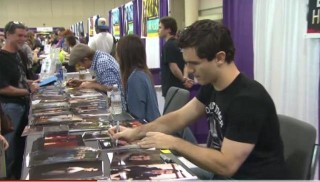 From a convention organizer’s point of view, the “talent” that attend conventions do enjoy meeting their fans.

The fans also are thrilled to meet their favorite actor. However, sometimes the fervor expressed by some fans can get a little out of hand. The term, ‘fan’ is short for ‘fanatic’ after all. I have heard some stories about the behaviour of some fans that completely explains the need for actors to have security with them when they travel from “The Green Room” to the stage. 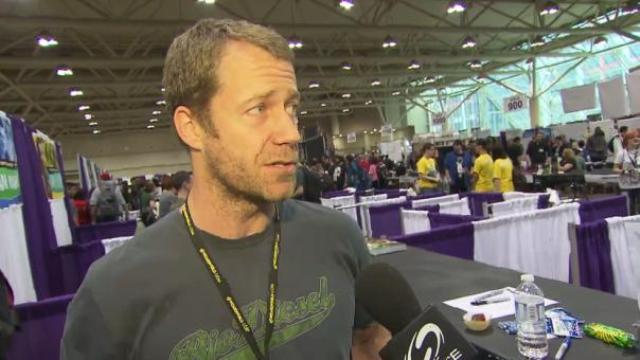 Despite the risk, actors continue to make an effort to connect with their fans. Yes, money is a factor in their decision to attend conventions, but many have admitted to me that the love they feel from their fans is a very strong motivator to keep coming back. In fact, one actor’s wife said that she is not fond of her husband, a well known actor, attending conventions because he returns to her feeling full of himself thanks to the ego building he experiences at conventions. 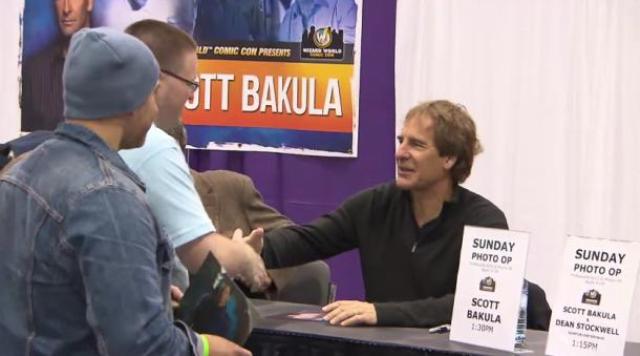 If there is a problem at conventions, it is the lack of female representation on panels. Writer Paul Cornell addresses the concern in his blog, Paul Cornell.com. He uses his own experience as a panel regular to make suggestions about positive changes to include more women, “I think there should be gender parity on every panel at every convention.  I’m after 50/50, all the time.  I want that in place as an expectation, as a rule”. 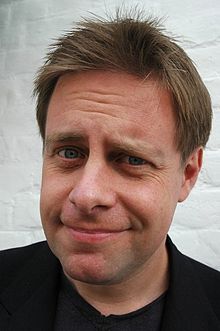 In some situations, a particular science fiction program draws a distinctly female audience. Convention organizers are hard pressed to ensure that panels, in these situations, are evenly represented by men and women. It is not that there are not enough female actresses on television or in film, the problem lies in the number of women that are among writers and producers in the industry.

For some reason, women who actually influence what we watch are in short supply.
From a convention standpoint, actors are not affected unless they choose to take a stand and support women creators. Since most actors tend to avoid politically charged issues at an entertainment event, I doubt that convention organizers will have much to worry about in the future. In this case, it is up to the fans to request more female representation in the writer’s and producer’s room at the studios, and on the convention panels.

Conventions are about entertainment. Fans who attend conventions are there to immerse themselves in a weekend of talking about their favorite subject;  show,  genre or  personal fixation. They are also there for a virtual family reunion of friends that they have made from attending other similar conventions. The actors, writers and producers who have been invited to share in this unique experience are genuinely happy to be at the event. It is the job of the convention organizer to bring “talent” and fans together in an atmosphere that makes everyone happy.

Thanks to Kenn for final staging of this news article and thanks to you for stopping by WormholeRiders News Agency! We hope to see you all for our interview: Dan Payne this Sunday 6 PM PST 9 PM EST!

Comment (1) on “Conventions From The Other Side: Dan Payne to Discuss His “Con” Experiences!”