We are pleased to announce our next special guest host, Colin Ferguson, who will join WHR Sunday June 24, 2012 6 PM Pacific, 9 PM Eastern time to discuss his human interest topic, Reconstruction in Haiti. As always, we will do a full post interview follow-up regarding Colin Ferguson.

Sometimes, bad things happen to good people. Sometimes, those bad things seem overwhelming. But when you survive something like an earthquake, and you have no insurance and no money, you do not have much choice but to make do.

In Haiti, already the poorest country in the western hemisphere, those least able to deal with the after-effects of a major earthquake have been forced to endure for much longer than what we would consider acceptable if it happened to us.

The major earthquake that struck Haiti may have shocked a region unaccustomed to such temblors, but the devastating quake was not unusual in that it was caused by the same forces that generate earthquakes the world over. In this case, the shaking was triggered by much the same mechanism that shakes cities along California’s San Andreas Fault.

The 7.0-magnitude Haiti earthquake would be a strong, potentially destructive earthquake anywhere, but it is an unusually strong event for Haiti, with even more potential destructive impact because of the weak infrastructure of the impoverished nation.

One factor that influences earthquake intensity is the distance to the epicenter of those who feel the earthquake’s effects. In 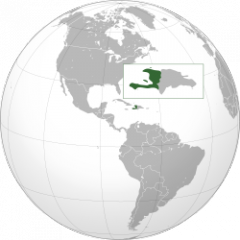 the case of the Haiti quake, the epicenter of the quake was only 10 miles (15 km) southwest of the capital Port-au-Prince and just 6.2 miles (10 km) below the Earth’s surface, “which for earthquakes is very shallow,” said Don Blakeman, an earthquake analyst with the United States Geological Survey.”So everyone in Port-au-Prince is basically within 30 to 40 km [18 to 25 miles] of the earthquake,” he added.

Another unfortunate factor in the intensity equation for Haiti is the infrastructure involved.

The 1989 Loma Prieta earthquake that struck San Francisco just before Game 3 of the 1989 World Series was also about a 7.0-magnitude quake. While it killed scores of people and caused billions of dollars in property damage, the relatively high construction standards in the city kept the devastation much lower than what was the case in Haiti.

Haiti is a poor country with lax building standards and high population density, which makes buildings more likely to crumble, according to Blakeman. “Unfortunately that’s going to be a lot of the factor here,” he said. 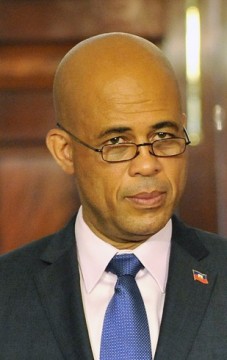 Another problem is the relative rareness of major earthquakes in the area coupled with poor public communication and education, which likely means that most Haitians were not prepared for such a disaster, as many Californians might be.
What has happened to Haiti is indeed a terrible disaster. But what continues the problem is that Haiti is still trapped by massive foreign debt which it can never hope to repay. It does not have the resources.

The Haitian government cannot help. The regime is known to be corrupt. Haitian President Michel Martelly has been credited for his efforts to lure reconstruction investment to Haiti after its catastrophic 2010 earthquake, which killed more than 200,000 people.

However, in a March 31 national television broadcast, Dominican investigative reporter Nuria Piera alleged that Dominican Senator Félix Bautista — who owns or controls construction companies that in the past year have received Haitian government contracts worth more than $200 million — paid Martelly a total of almost $2.6 million during Martelly’s presidential campaign and after his landslide victory in Haiti’s 2011 election.

The charge, based on spreadsheets of bank records Piera displayed on the air, was serious enough to prompt Dominican federal prosecutors to declare Bautista under investigation. Both the Senator and Martelly, whose office calls the allegation “a media lynching,” deny it. 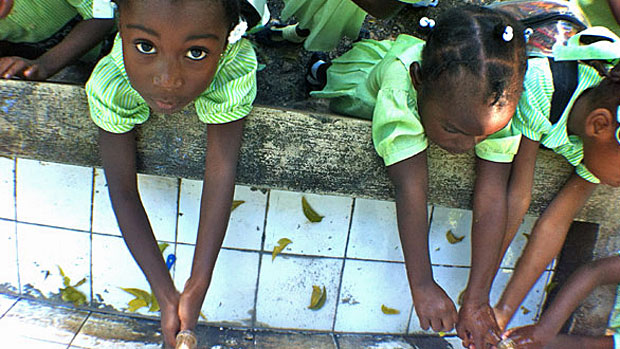 So, what to do; how do we help fix this? Foreign aid is a common solution to countries in the third world requiring assistance to get back on track economically, socially and developmentally. Is that possible, though, in Haiti? “It’s what I’d call a perfect storm for high corruption risk,” says Roslyn Hees, coauthor of Preventing Corruption in Humanitarian Operations. “You have a seriously damaged institutional infrastructure, a country with endemic corruption, a weak or fragile state in the best of circumstances, and sudden influxes of huge amounts of resources to a highly vulnerable population.”

One idea is simply not to get involved. Haiti is too far gone. Another extreme is to dismiss worries about corruption and dive in. “Of course Haiti has failed, failed, and failed again,” writer Paul Collier, author of an impressive economic strategy for Haiti, and Jean-Louis Warnholz in the Financial Times. “Yet episodes of traumatic failure are ingrained in the histories of even the most advanced economies.” No one’s perfect—so, don’t look back, just man up and move on.

There is abundant evidence of corruption’s many costs. Systemic corruption distorts incentives, undermines institutions, and redistributes wealth and power to the undeserving. Corruption slows economic progress. Estimates are that corruption is responsible for a reduction of 58 percent in per capita income in Latin America and the Caribbean.

To find the answers, ask the people. Citizens know where corruption affects them, from getting driver’s licenses to receiving public services. Lawyers understand the workings of corruption in legal systems. Accountants know the illicit games played with audits. Business people understand how corrupt systems of tendering work. Education and encouraging ethical government is key.

Meanwhile, the people of Haiti still need to receive food, medical aid, housing, education and jobs. In the two years since the quake, $4 billion has been spent on reconstruction. So what did the world get for its money? The answer is, not enough.

Half a million Haitians still live in the large makeshift camps that people fled to when their homes fell down. The camps are fetid messes of humanity where rapes are common, murders not infrequent and sanitation seriously lacking. The close quarters in the camps aid in the spread of cholera, which still infects about 9,000 people a month. 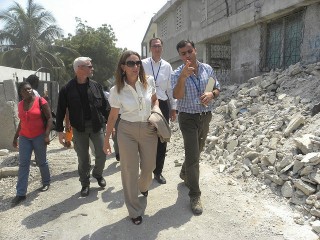 In his opening act, Martelly’s big initiative was a plan to create a national army, in part to help combat sky-high youth unemployment. Western governments wasted no time telling him it is a stupid idea. With its violent, ugly past, the last thing this country needs is more people with guns.

The rate of removing debris has picked up noticeably. It is actually progressing at a faster rate than after the Boxing Day tsunami in Banda Aceh in 2004 and the 9/11 cleanup in Manhattan, UN officials say. But as the debris removal crews move in to the more impoverished areas, both squatters and property owners are refusing to leave. They may be living in ruins, but it is their ruins. The squatters also don’t see much safety in the camps, so they don’t want to give up the only place they have left in the world and this has lead to considerable delays.

Other than the army, one of Martelly’s signature promises was to create a space for any Haitian child at a public school. But there has been no progress on this front, barely even an attempt to fulfill the president’s promise. Fewer than half of Haiti’s kids attend school. And of that half, only one in five attend a free public school. 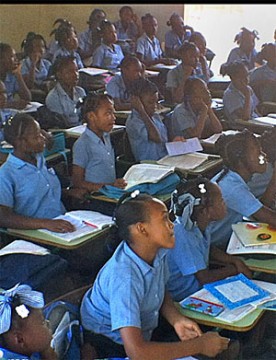 The school has no budget, no school supplies and yet 1,400 students a day. What’s more, these kids couldn’t be happier. They are among the poorest of the poor, who get often their only meal of the day through a UN-sponsored school lunch program. That helps keep them connected to the school and ensures their parents send them. The curriculum seems basic but it is about the only thing the children have going for them. Education may yet prove the staircase through which they can escape the cycle of poverty.

To deal with sexual assaults and other crimes against women in Haiti, the R.C.M.P has set up a gender advisor. This is a female officer who is in place to educate other local police in Haiti about how to deal with complaints of gender based violence. Said Corporal Martine Renaud, “through the simple act of accepting and processing a woman’s complaint of sexual assault or domestic violence, we legitimize these complaints, thereby upholding the women’s rights and promoting sexual equality.

The training is getting results, with more women reporting domestic and sexual assault. This is not because there are more cases, but because the population is becoming more aware of their rights and trust police enough to report violations.”

Rebeca Grynspan is the Associate Administrator of the UN Development Programme (UNPD). She is helping to oversee job 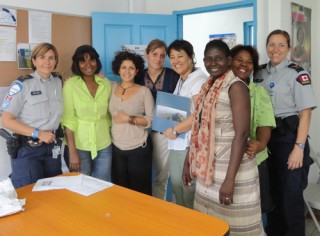 creation in Haiti. Ms. Grynspan said UNDP had helped create 300,000 temporary jobs since the quake, organizing people to carry out activities such as debris removal, garbage collection and enhancing disaster risk reduction. Forty per cent of the temporary jobs have gone to women.

Efforts are now shifting towards the creation of more sustainable jobs, moving from cash-for-work schemes to cash for production employment, according to Ms. Grynspan. “We are supporting more and more small businesses, community-based organizations, self-employment and much more training for the labour force for them to be able to have access to the job market,” she added.

On the cholera epidemic outbreak that hit Haiti 10 months after the earthquake, Jon Andrus, the Deputy Director of the UN World Health Organization’s (WHO) regional arm, the Pan-American Health Organization (PAHO), said the outbreak can only be eliminated through capacity building in health and water and sanitation infrastructure. He pointed out that the cholera outbreak turned out to be one of the largest epidemics of the disease in modern history to affect a single country.

Knowing that change is the best solution to their problems, Haitians are not only working to create a better infrastructure, but to develop jobs and increase education. However, two years after the earthquake, the world has turned its attention to other pressing matters. If Haiti is going to be successful, it will continue to need help from the rest of the developed world. If you can, get involved, either at your local community level, or by volunteering in Haiti, as our guest host, Colin Ferguson is doing. Donate to help. Get involved.

Thanks to Kenn for final staging of audio and images in this news article and thanks to you for stopping by WormholeRiders News Agency! We hope to see you all for our interview with Colin Feruson this Sunday 6 PM PST 9 PM EST!