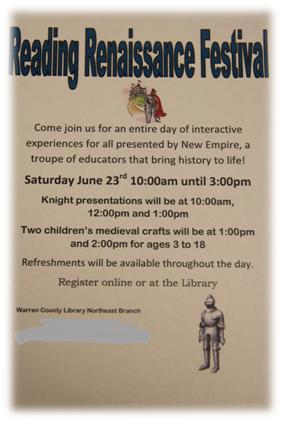 We begin a new special spotlight series on books and the importance of reading them yourself and with your family! As recently reported by the Nielsen Company, Americans, on average, spend 20% of their day watching television.

We suggest that an additional 20% of your time be invested in reading which is so critical to proper development and maintenance of minds, both young and old.

Straight from the Collins English Dictionary (complete and unabridged), the definition of renaissance is as follows, “renaissance (noun): a revival or rebirth, especially of culture and learning”. And in those terms, Collins Thesaurus of English Language also provides us with the following, “renaissance (noun): rebirth, restoration, renewal, awakening, resurrection, regeneration, resurgence, reappearance, new dawn, re-emergence, and reawakening, new birth”. 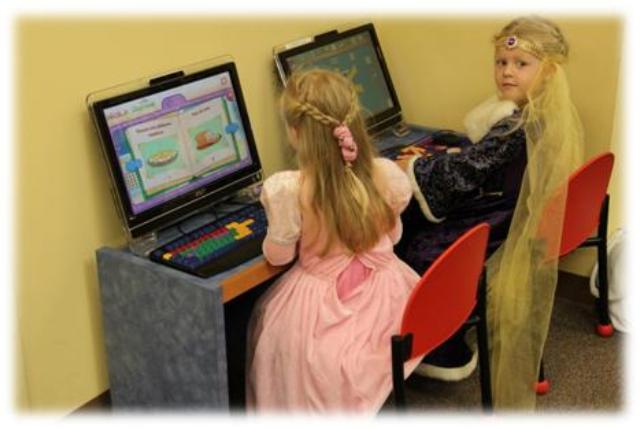 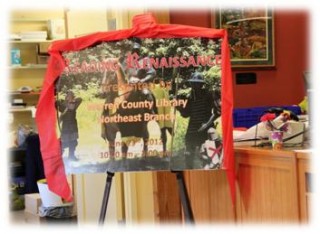 In terms of history, “The Renaissance” was a cultural movement spanning approximately the 14th  to the 17th centuries.  The movement itself began in Italy, and gradually spread through the rest of Europe.

The Renaissance itself profoundly affected all intellectuality of Europe – influencing literature, philosophy, art, music, politics, science, and religion – basically it touched every fiber of inquiry of the time(s).

To tie directly into the definition of renaissance, Jules Michelet (French historian, (August 21, 1798 – February 09, 1874) defined the 16th century of Renaissance in France “as a period in Europe’s cultural history that represented a break from the middle ages, creating a modern understanding of humanity and its place in the world”. 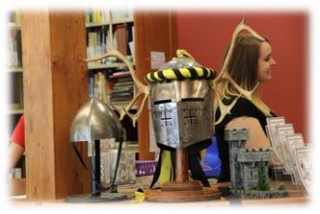 Why write about the Renaissance? Well, our local library began its Summer Reading Program on June 18, 2012.  There is an overall “nighttime” theme to their various programs – for the elementary aged children, the theme is “Dream Big – Read”; for the middle school through high school aged children, the theme is “Own The Night”; and there is also an adult program titled, “Between The Sheets” (NOT what you are thinking!!! Specific titles are suggested that are tied to the summer reading theme!) 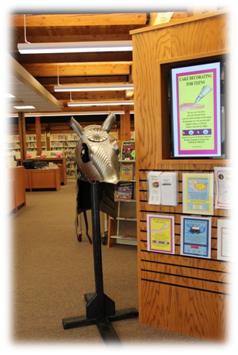 The BIG event for this summer was their “Reading Renaissance Festival” that took place on Saturday, June 23.  Their monthly newsletter described the event as this: “An interactive library experience.  Knights and maidens will entertain all who enter.  Children’s crafts, exhibits, storytelling, and light refreshments.”

Today, New Empire provided a small window into the history of weaponry and armor from the late 15th century, with a piece or two from the Roman Empire (from near 50BC), to show the specificity and development of armor and weapons of Europe. 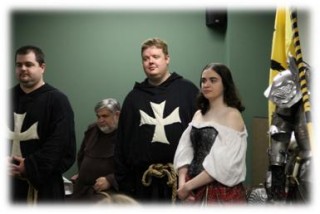 “Sir Thomas” and New Empire explained and demonstrated to three crowds (throughout the day, presentations at 10am, 12pm, and 1pm) the evolution of weaponry from farm implements to various forms of weaponry.

The weapons varied from the Morning Star, finding its origins in Egypt, as a threshing tool for grains. 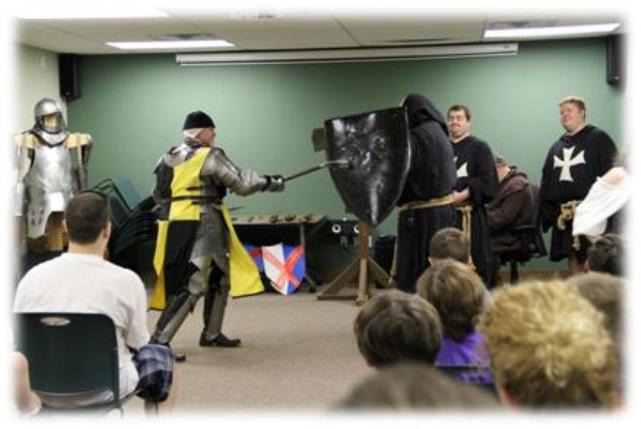 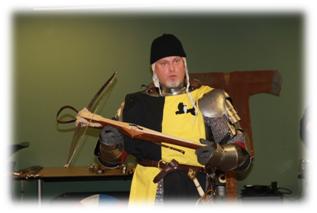 Then came a short lesson in the ease of the training and the use of the crossbow, thus making it a vital and important weapon, due to its lethality and simplicity. Followed by a short lesson in “personal defense” with swordplay was also demonstrated – with 6 simple parry positions, one can defend oneself from virtually all incoming blows.

After each arms and armor demonstration we were delighted with lessons in a couple of simple Medieval dances, led by Katie Iannacone and Kyle Wright.  The first dance was a line dance of sorts, with little to no physical contact between participants, it was the elegant dance of the times. 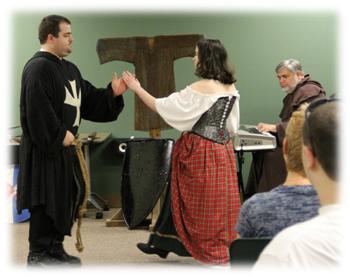 The second dance of their demonstration was one that a couple might participate in, again, with the emphasis on little to no physical contact, basically fingertips only.  Accompanying Katie and Kyle was Steve Iannacone, New Empire’s friar of the day, on the keyboard.

Also being held throughout the day was the explanation and demonstration of the spinning wheel.

A unique pleasure and an unusual exhibition of our era to say the least, local artist and living historian in her own right, Bern Yates brought in her spinning wheel, various local wools, and a variety of delightful finished “hand spun” products. 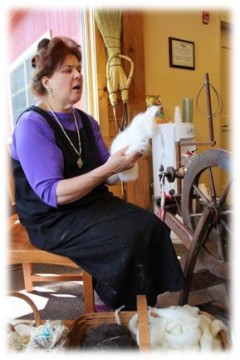 Ms. Yates started her demonstration with a brief history on the Spinning Wheel itself.  Quite simply, in ancient times, approximately 1,000AD, the evolution of the spinning wheel was that of a stick with an attached weight or stone (a spindle) being held upright, to being turned on its side, adding a pulley, and connecting it to a drive wheel.

Somewhere between the 13th  and 14th centuries, the foot pedal was added, and to quote Ms. Yates’ flyer, “the spinning wheel was off and running”. Ms. Yates herself is a member of the “Friends of the Library”, and saw this particular Saturday as a way for her to impart her love of craft, art, and history on the library patrons.

A 4th generation spinner, dating back to her great-grandmother, Ms. Yates gets her wool from a local farm, and uses the wool for knitting, crocheting, and weaving.  Getting virgin wool from this farm, she spins it herself, and has dyed it too on occasion.  One example she brought with her was a table runner, dyed with Queen Anne’s lace (green), Goldenrod and Tin (yellow), and Iron and Tin (red). 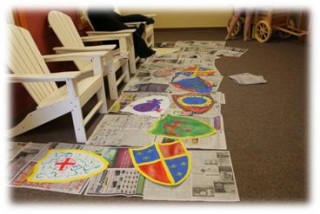 Rounding out the day’s festivities were a couple of crafts for on the second level of the branch for their younger patrons.

There was shield making – poster board stock cut in the shape of a shield, painted by the children, and also crown making…with three kids, our house came home with five shields and four crowns! (go figure)… 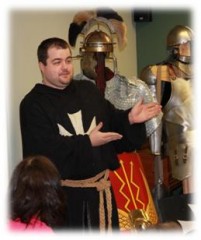 The aim of the weekend’s “Reading Renaissance Festival” was to awaken and revive the patrons’ love of art and literature over the summer.

To not forget about the arts and their beloved library, that the summer is not a time of shutting down the brain and learning centers of the youth freshly finished after the school year.

Instead, it is important to intensify scholarship, scientific and geographical discovery, a sense of potentialities (from Collins English Dictionary).

The tops of most of the bookshelves were capped with books relevant to the time period, knights, chivalry, castles, and maidens!

Wherever you looked, the past met the future, the renaissance: the revival of learning and culture in our society!

Thanks to Kenn for final audio and image staging, and many thanks to you for reading and for visiting WormholeRiders News Agency to read about our news coverage of the wonderful event at the Warren County Library!

2 thoughts on “The Past Meets the Future: A Reading and Learning Renaissance Means Knowledge For All!”

Fri Jul 20 , 2012
Hi Amber Benson fans! On Friday July 13, 2012 in San Diego during our adventures at Comic-Con, we had the pleasure of interviewing the terrifically talented Ms. Amber Benson! We all remember Ms. Benson fondly as the lovely Tara Maclay in Buffy The Vampire Slayer as well as the recurring […] 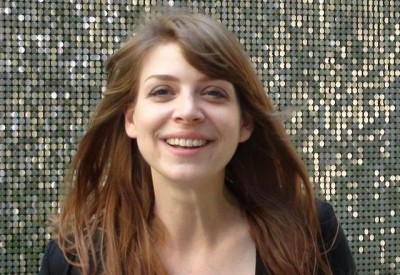