Here we are on Day Two of Creation Entertainment’s Stargate Chicago!  Despite some creepy weather this morning, I was up bright and early,

getting out of the very poofy, very comfortable king bed at the Westin O’Hare.  As far as hotels go, this is definitely one of the more upscale ones.  Their restaurant, (who offered a lovely 20% discount to all convention-goers), is filled with professionally cordial and friendly waiters, and the chef is top quality.

My morning started with Kavan Smith, kickin’ it onstage after a beautiful opening tribute video juxtaposing shots of him with various planes and soldiers of the Air Force.  I confess, it brought tears to my eyes.  But once Kavan got onstage, the real fun started.  For the next hour, he regaled us with a number of hysterical stories and opinions, quipping about “The 4400” and explaining his view on the F-302 vs the Orion.  He took a downward, solemn turn on discussing the end of Eureka, and added in a few silly stories about some of the cast members.  He rounded out the chat by telling the story of how he got in a motorcycle accident outside a town called Eureka. 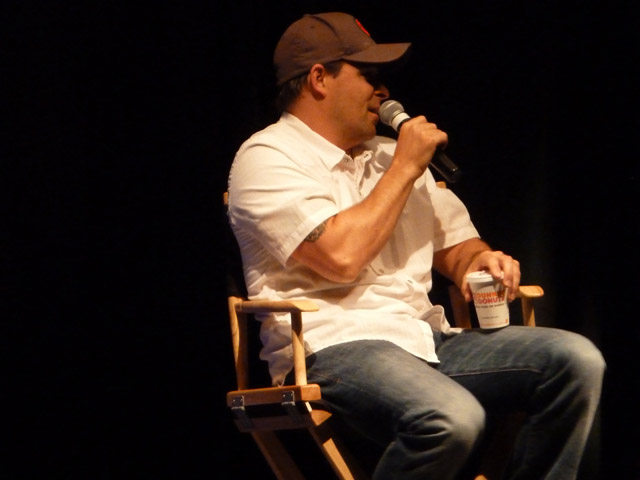 Life only got more interesting as the next guest took the stage, his voice rumbling through the theatre.  I overheard one of the convention personnel stating this was the first time Christopher Judge has been to a Creation convention, so my excitement level doubled when he walked out.  His opening line?  “I am in The Dark Knight Rises.  And that’s all I can say.  Oh – and I’m not Robin.” 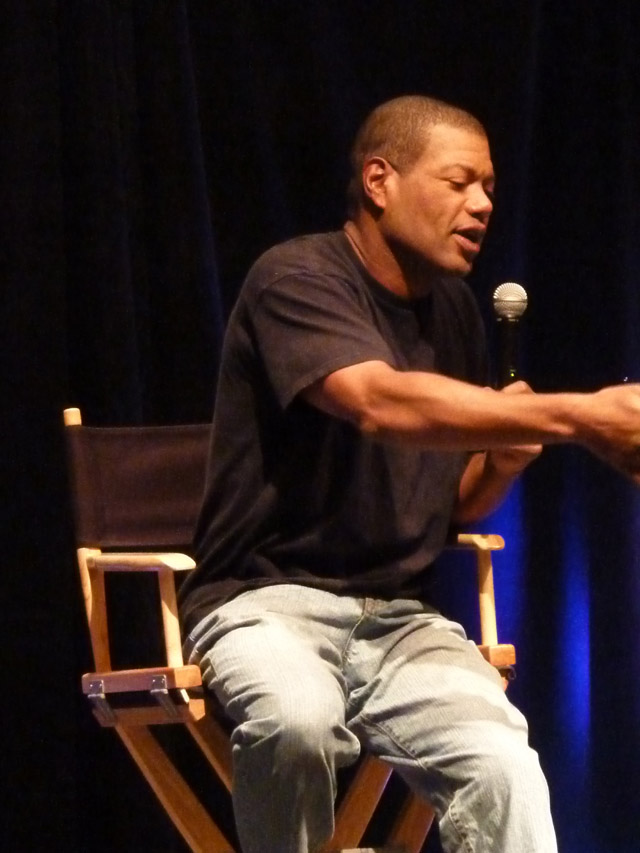 Following that introduction, he fielded some truly interesting questions by fans, then launched into a diatribe about Jason Momoa.  In the middle of his numerous adjectives describing Jason, who better to burst out onto the stage than Paul McGillion! For a moment, we were treated to the sight of them side by side as Paul showed off his Cubs shirt, then exited the stage like he owned it.  Chris’s response?  “Who was he?” 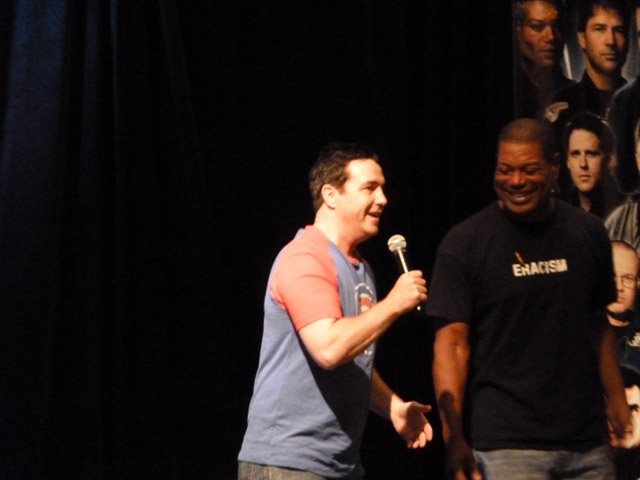 Chris then continued taking questions from fans ranging in subjects from the numerous pranks on set, (including taping people to trees), to his first experiences with the Jaffa helmet, (it took four men to put it on him).  He wrapped his discussion by impersonating Joe Flanigan – albeit unintentionally.  He was full of one-liners, but I think the one with the most laughs was: “Nothing says Egyptian like eyeshadow.”  Exeunt.

Shortly after Chris’s laughing exit, I bolted back to the dealer’s room to hop in a long, serpentine line, at the end of which sat Kavan Smith, signing away.  We were all clustered in the center of the room, leaving the vendors’ tables open, and it became crowded rapidly as shoppers mingled with autograph-seekers.  There was still plenty of time for chatter though, and by the time I reached Kavan I would made at least three new friends.  Never let it be said that Stargate fans aren’t chatty!

Kavan offered me a big smile when I handed him my first picture, (I actually had two, one for me and one for a friend), and told me it was: “a pretty cool picture!”  After signing that one I gave him the one for my friend, and he described her name as: “really cool” and added a flourish onto the autograph.  He had the time to add to me: “thanks for coming out,” and I reversed the compliment, giving it right back.  Then, whoosh! (ka-whoosh?) – I was out the door and back into the theatre.

The third guest of the day was the truly awesome Paul McGillion, and he started his chat off with some chatter about his newest project: Captain Starship, a sci-fi/comedy TV series that he describes as: “Two and a Half Men meets Entourage plus sci-fi.”  Then, as he trailed off, he spotted the Stargate sitting on the side of the stage.  This was a truly tear jerking moment as he said: “I remember you,” walked over, and kissed the Stargate.  For a moment, there was complete silence in the audience, which Paul finally broke by beginning to take questions – and here’s where the laughs really began.

It started with a bold little kid who sprinted up to the mike – and Paul promptly made him drop and do ten pushups.  The kid did so, and retaliated with: “What was it like to play a doctor on TV?”  This gave Paul plenty of storytime, sharing with us his first experiences on set and on read-through, giving us all an insight into his beginnings on our beloved show.  The questions that followed came from all sides of the spectrum, but Paul fielded each one with plenty of information and humor, (one favorite moment came when he described Jason Momoa as ‘Marmaduke meets Chewbacca’.  Can you see it?).  And then he decided to have fun with us. 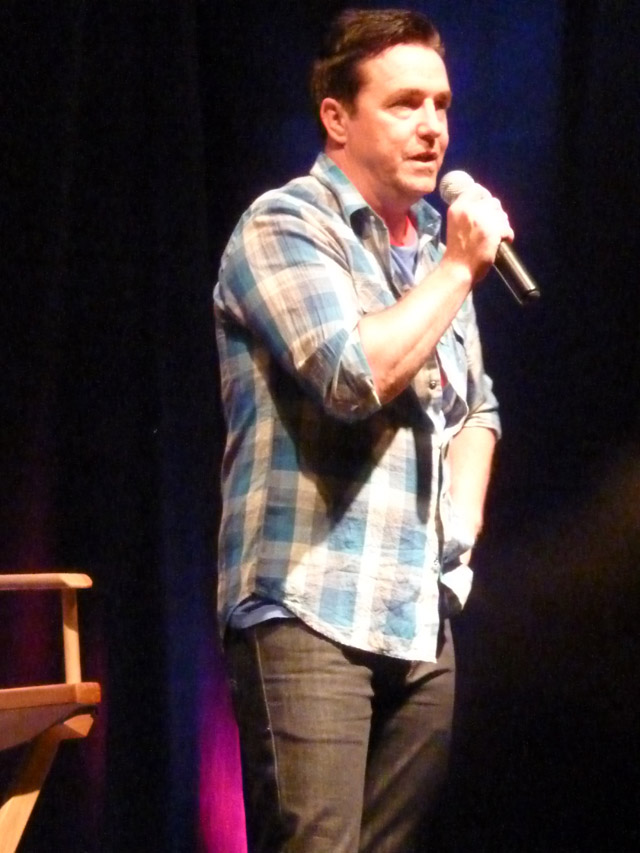 A beautiful Scottish woman got up to answer a question, and Paul promptly beckoned her onstage.  “Come on up for a house call with Doctor Beckett.”  As if the audience wasn’t swooning enough, after the fan asked her question he replied with: “You have beautiful eyes.”  I have to confess, it took a lot of courage for me to get up and ask him my own question, (which he didn’t actually have an answer for, but still managed to tell a story that did the trick!)

My day ended with autographs, hovering in line for Christopher Judge and Paul McGillion.  Thanks to a mishearing on my part, I actually was almost last in line for both of them, and therefore got to chat a touch with both.  Chris Judge shook my hand twice, grinning widely and signing my DVD with: “Indeed!” Paul thanked me for my question and told me he’d seen me laughing at the mic.  That got a blush to my cheeks, but I still got a thank you out.  He still had plenty of energy, quipping rapidly with any fan who elected to speak to him, (or who could get a word out), and I walked away feeling very excited.  Such then, was my closing to Day 2 of Stargate!

Mon Aug 29 , 2011
Hello again, Stargate Fans! Here we are on Day Three and Final of Creation Entertainment’s Stargate Chicago convention! Adrenaline came in handy this morning – I had barely slept the night before for excitement, but even on two hours I was up and ready to go almost thirty minutes before […] 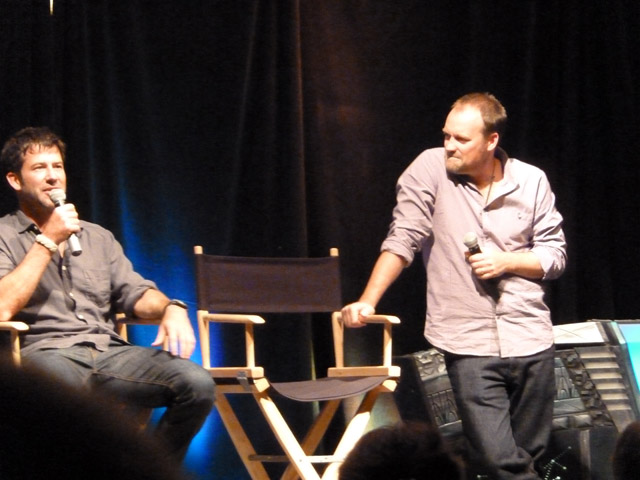