Hello to those who enjoy Fan Expo Canada!

Fan Expo Canada started with a bang in Toronto, on a nice and bright Thursday morning at the Metro Toronto Convention Center.

Thousands upon thousands of fans stood outside for hours waiting in lines to get into the expo, a weekend which would surely prove to be worth the time and money.

As everyone who attends conventions knows, one thing that was a constant sighting at the expo was lines, many very long lines. At almost every corner of the event you would find a great many number of fans standing in very long lines, waiting patiently at times for hours, waiting to get to the front so they can have a chance for seating at the front of the ballrooms to see the celebrity or celebrities they admire so much.

One of the best things of conventions, in my opinion, are the fact that fans can let their passion and dedication to their crafts. The way the fans do it best is by allowing it to show on the outside. Fans demonstrated what they were with their costumes or engaging in “Cosplay” as is known to those who are aware. One costume that stood out to me was a fan who designed a radical looking version of the loveable Pokemon, Pikachu! 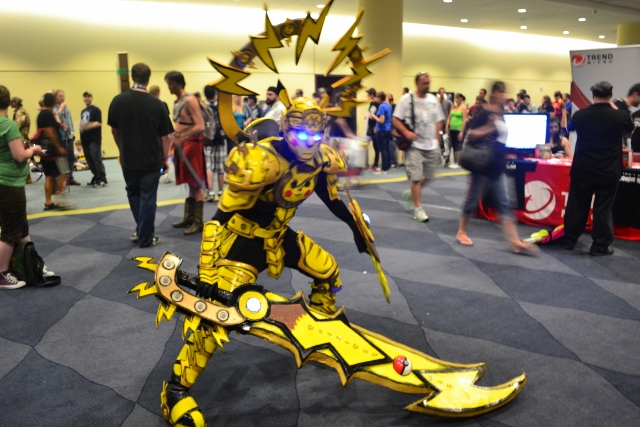 What really impressed me the most was the amazing imagination and creativity in the unique costumes many fans put together from their own minds. These were not simple costumes you could find at your local store, many were handmade, detailed and carefully thought up costumes, and the effort fans put into them was amazing.

Another fascinating concept of the convention were the alien characters from television, and other science fiction sources, fans created using their own skills and intellect. A fan clearly went the extra mile to design a well crafted Iron Man suit. 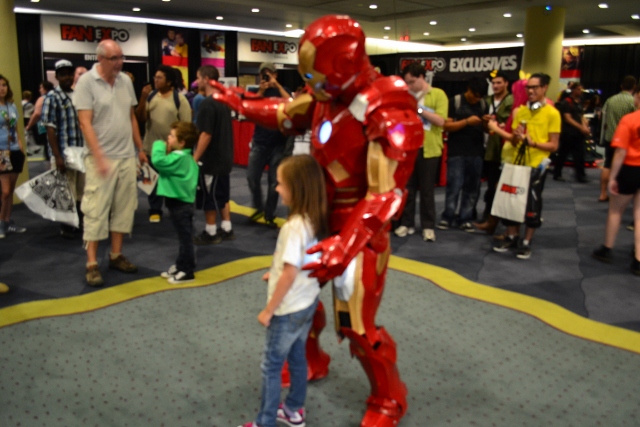 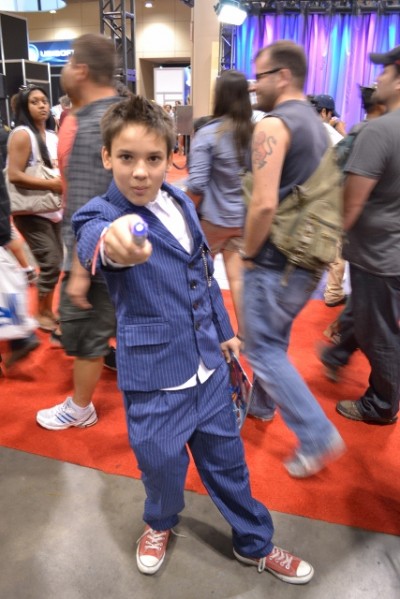 A young man cleverly dressed up as the tenth incarnation of Doctor Who, played by David Tennant. What I thought was good, was that the young man dressed up in red converse shoes, which the tenth Doctor wore when he dressed in his blue suit, instead of his trademark brown suit.

Another Doctor Who treat was seeing a very well man made Dalek (video above), which fans know as one of the most popular Doctor Who villains in the shows history. This Dalek could actually move and act like they do in the show, even could talk with the proper Dalek voice.

Another amazing Dalek (image below right) I observed was one that was bigger and bolder than the common look of a Dalek. It also had a glow under it’s body, which I thought was a cool geeky feature! 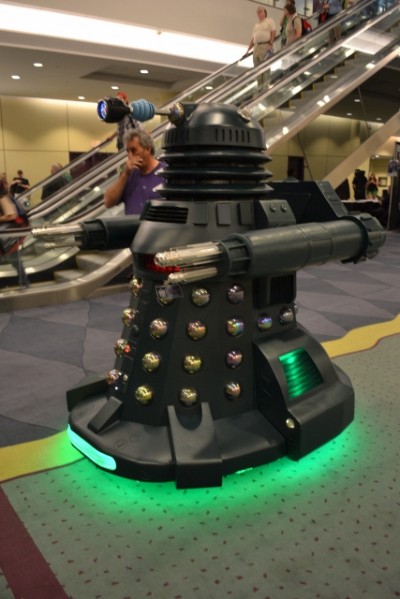 I was able to explore the convention throughout the day. I saw no shortage of excitement. The fun amongst the countless fans who took the time to attend was clearly evident.

The actual decor and layout of the convention was very well thought out, easy for someone to find their way around. Fan Expo Toronto 2012 had excellent information booths and signs around the hallways, which allowed guests to find where they need to go, or wanted to go.

The Fan Expo Toronto 2012 schedule was carefully thought up for the guests, fan expo was even smart enough to design a mobile app for the convention, which would allow fans to easily find their own personal schedules on their phones, thus not needing to look around for help, or information booths. 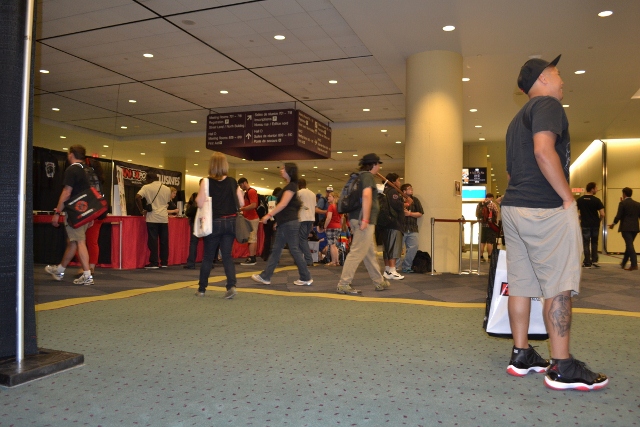 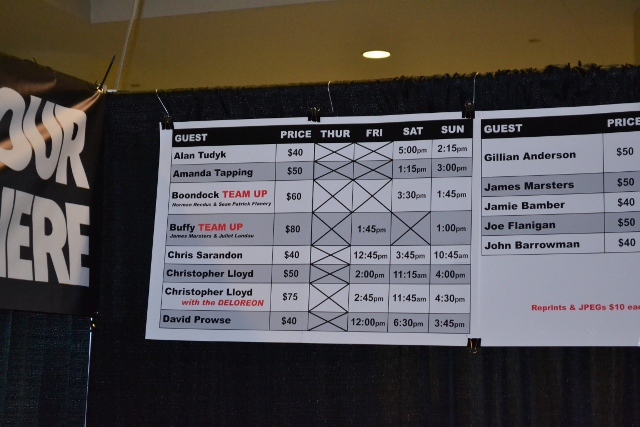 As a guest myself, fan expo did a great job in not only giving fans a chance to have a great convention experience, they made it easy for them as well. Not only for the fans, but the many great talents attending, which is another reason I feel fan expo did a brilliant job in how they organized the convention. The food there was awesome as well.

During my adventure as an authorized press representative, I was lucky enough to chat briefly with some famous faces, such as Lou Ferrigno, who played The Incredible Hulk in the 1980’s television program. 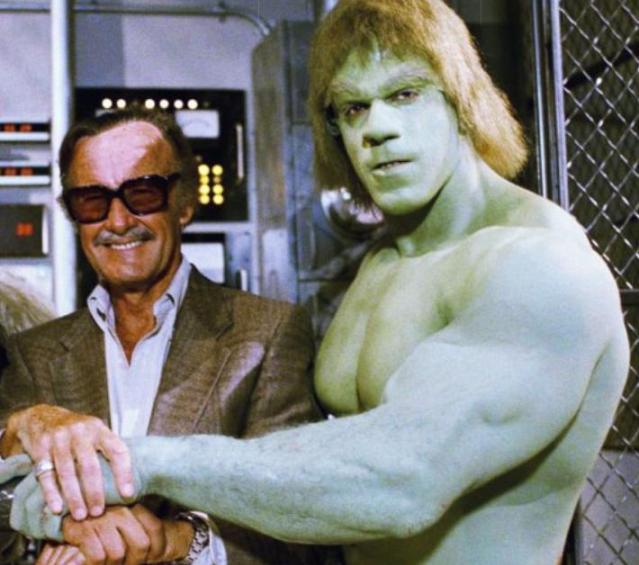 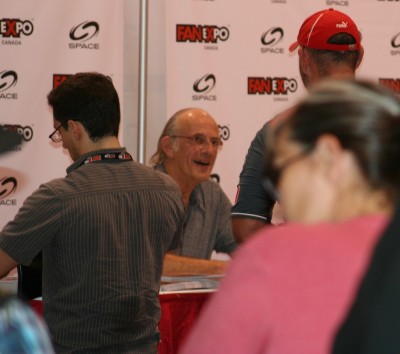 I also enjoyed my chat with Christopher Lloyd, who is best known in the science fiction community as Dr. Emmet Brown from the Back to the Future movie trilogy.

Christopher Lloyd is the nicest person you could ever meet. He obviously looked like he was having a good time at Fan Expo Toronto 2012!

The two biggest highlights for me personally on Thursday were during the autograph session meeting Joe Flanigan, who fans know best as Lt. Colonel John Sheppard in Stargate Atlantis.

The other was meeting John Barrowman, who is best known to fans as Captain Jack Harkness from the revived classic series, Doctor Who, and its spin-off series, Torchwood was nice to meet also. 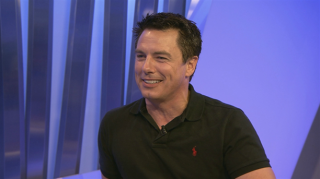 Being a fan of Stargate Atlantis and Doctor Who myself, it was a big treat for me to be able to meet and greet such popular figures in the science fiction. I chatted John Barrowman first at the autograph session, he was such a gentleman, a delight to talk to, and I thanked him for coming down to the expo, which he said he was happy to be there as well.

Then I moved on to meet a fan favorite, Joe Flanigan at the autograph session, I asked him to sign my blu-ray series set of Stargate Atlantis, which he happily agreed to do. While he did that, I thanked him for rocking it out as John Sheppard for five solid years on Atlantis. I also thanked Mr. Flanigan taking the time to come to to Toronto for the expo.

He thanked me for what I had said, and said he was glad to be there. As a fan, I feel it is important for fans to pay proper respect to the celebrities who they admire so much by thanking them often, as they should. I walked around the attraction room a bit more, and saw some amazing science fiction, and other recognizable genre fan favorites, as well as tons of geeky merchandise! 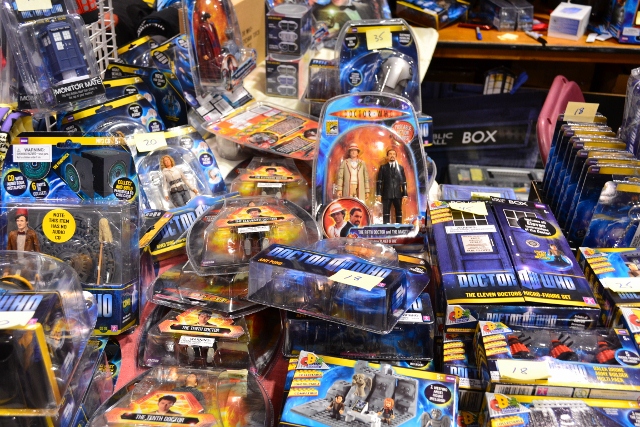 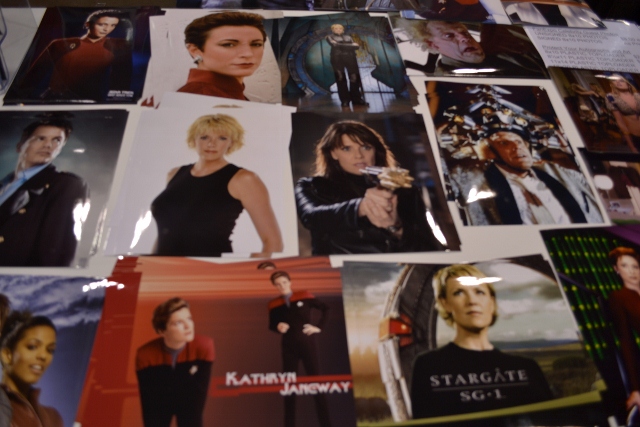 The final event of the day was attending Joe Flanigan’s Q&A panel. The room was full of fans excited to hear what such a popular science fiction icon had to talk about, and Teddy Wilson, who co-hosts the wonderful Space Channel program Innerspace, with Ajay Fry and Cynthia Loyst.

Mr. Wilson was there to be a moderator for Joe Flanigan’s panel. Having seen Teddy Wilson many times on Innerspace, it was a great bonus to have him there, and I feel he did a very professional and fun job. 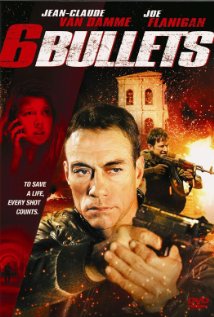 The panel began by Joe taking fan questions, of course Mr. Flanigan gave very good answers, and it was just such fun to sit and listen to him talk. He spoke of his most recent project, “6 Bullets“, co-starring action icon, Jean-Claude Van Damme.

An interesting part of the panel is when a fan asked about the dynamics of Stargate Atlantis cast, and how they developed over the course of the show, particularly after the departure of Torri Higginson, who played Dr. Elizabeth Weir.

Mr. Flanigan talked about the creative and executive decisions regarding the changes the show undertook over its course, then spoke of how things changed when Amanda Tapping (best known widely amongst fans as Colonel Samantha Carter on Stargate SG-1, Stargate: Atlantis, Stargate: Universe, and Dr. Helen Magnus (Sanctuary) who created the hit show in 2007 after Stargate SG-1 ended its ten year run.

Joe Flanigan said he loved working with Amanda on Atlantis, but did not want the show to become “SG-2” but rather it stay the same as it had been up until that point. Joe Flanigan is a very honest person in my professional opinion. Regarding that statement, he explained that he loved working with Amanda Tapping, but still wanted to keep Stargate Atlantis the show it always was. A bonus of the panel was finding out that fellow co-star, Rainbow Sun Francks (who played Lt. Aiden Ford on Stargate Atlantis) was in the panel room watching the panel. Joe Flanigan and the fans, including me, thought it was awesome he was there!

It was an absolute pleasure to sit back and listen to a great talent like Joe Flanigan talk about Stargate Atlantis, his family, and his current projects. In my opinion, it is always a pleasure for any fan to get a chance to attend these celebrity Q&A panels, have that time to sit back, and enjoy hearing someone they admire talk about topics they enjoy so much. 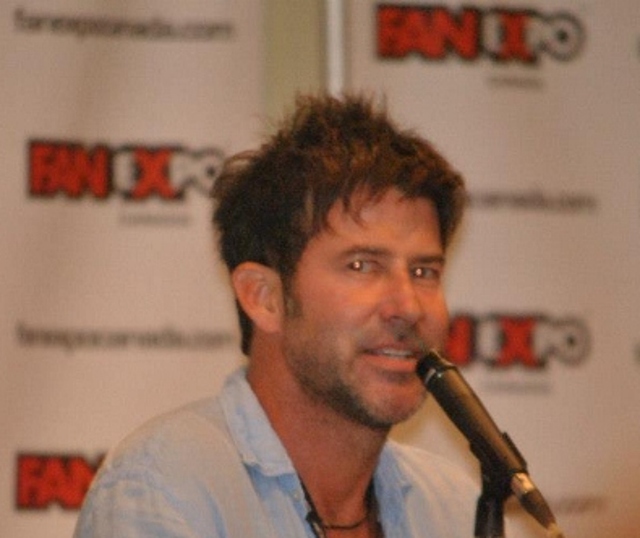 That concludes my report for day one of the terrific Fan Expo Toronto! I would like to thank those who who take the time to read my experience from such a great, and popular established convention. I will be back soon to bring you more stories, details, and special treats about the remaining three days of my adventures at Toronto Fan Expo 2012!

Thanks to Kenn for audio embedding, hyper-linking and putting finishing touches on my Toronto Fan Expo day one report.

I would appreciate it if you could leave a comment here or if you prefer, click the social media icons below to share this news article.

Also, please visit me on Twitter, by clicking the text links or image avatars in this news story. I and the WHR team thank you for sharing the fun with us. Thank you.

Toronto Fan Expo Canada: Day 2 - Doctor Who, Back to the Future, Star Wars, Costumes, and the Fans!