Day two of Toronto Fan Expo Canada started off hot at the Metro Toronto Convention Center. Literally, it was a hot and sunny day that day.

The streets of Toronto were filled with countless fans as they walked down to the Metro Convention Centre for the second day of Expo, many of which dressed in very well crafted costumes.

These conventions are an excellent example of how fans allow their creativity and imagination flow free, allowing them to dress up on a day other than Halloween.

I was more than ready (and excited) for day two of the fabbulous Toronto Fan Expo Canada, Specifically  to share my professional observations, personal experience and an opinion with you the reader; Day two was more enjoyable for me than day one.

I began my Fan Expo Canada journey the first day roaming through the halls of the exposition. As I had observed the day before there was no shortage of talent in the convention center building!

This includes the quality of the facility itself, the staff, the celebrity guests, and naturally the wonderful fans themselves!

Having scouted the facility previously, I had a better idea of the layout of the area as well as the many attractions for the attendees to gleefully enjoy.

As a result I was able to get around easier asking for directions here and there for new areas I had yet to explore. The fans and the staff were courteous and helpful.

One of the first things I did was go back and see the iconic DeLorean from the Back to the Future franchise, starring Michael J. Fox and Christopher Lloyd. As mentioned in my day one report, Mr. Lloyd was a popular guest at Fan Expo Canada.

Being able to see such a famous automobile was an amazing experience as an admirer of the Back to the Future franchise myself. Unfortunately, I was not able to go inside that specific exhibit due to time constraints. 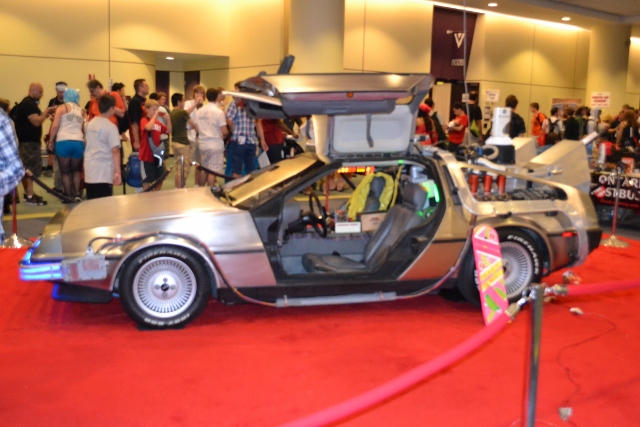 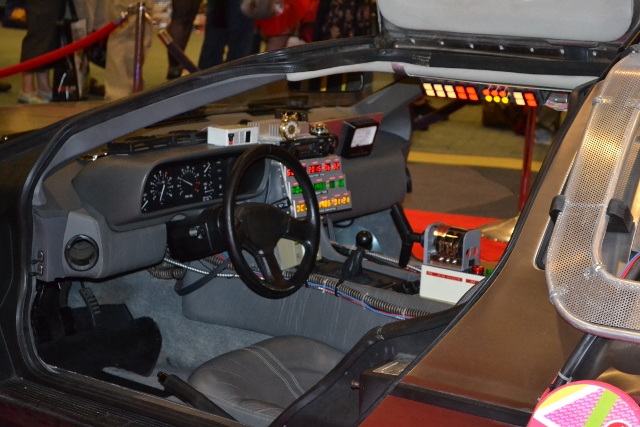 One of the locations I visited 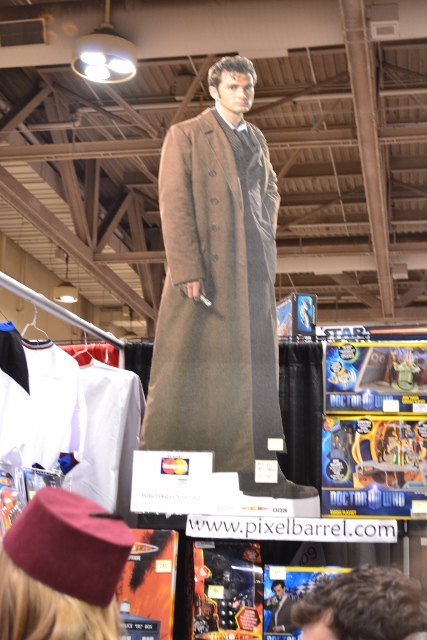 was the large room filled with all sorts of attractions of all genres. One of the best things about it in my opinion was that there were no limits, no end to the imagination. Most importantly at Fan Expo Toronto there was no lack of talent!

Many attractions, along with merchandise in the attraction room were arts and crafts made by the fans, for the fans and celebrities attending. Seeing fans take the initiative to showcase their skills, and represent Toronto Fan Expo this way gave me an extra sense of pride to be apart of this incredible community. 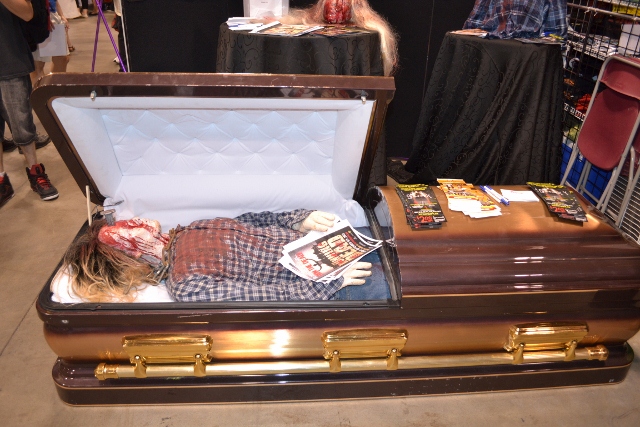 I tried to focus more on the types of costumes people wore, as well as the detail they put into them.

One factor that impressed me was that fans did not simply wear their costumes exactly as the character they were portraying. Many of the fans meticulously added their own little touches to the outfits they wore.

The costumes many fans made were good enough to be in television, and some fans were even in the early teens. For any fan to come up up with such elaborate, detailed design is very clever, something that many fans of all ages have in common, which is another thing that binds so many from around the world to one place. 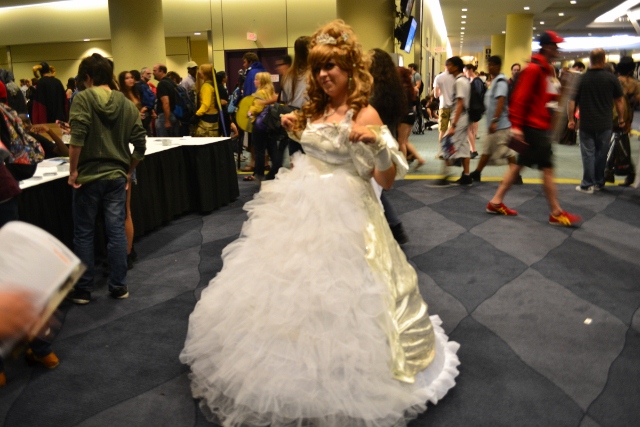 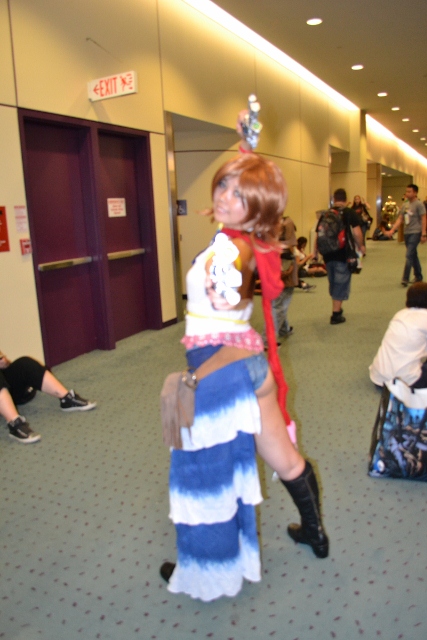 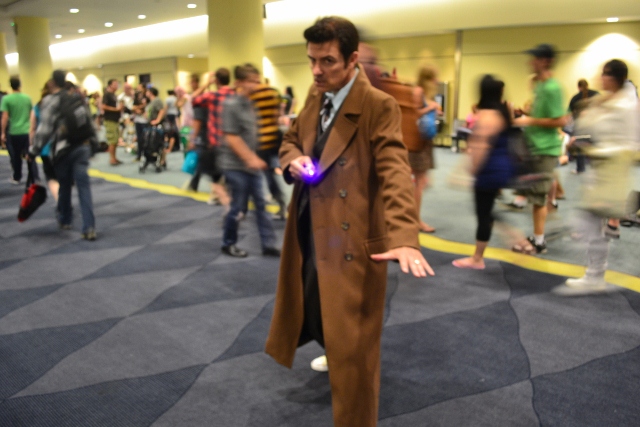 One of my personal favorites were the fans that dressed up as the different incarnations of Doctor Who.

The two most popular Doctor Who outfits that fans wore were of the tenth Doctor, played by David Tennant, and the eleventh Doctor, now portrayed by Matt Smith in the new season recently premiered world-wide on the British Broadcasting Company (BBC) in the United Kingdom (England) as well as their sister station BBC America, which broadcasts Doctor Who for series fans in the United States. 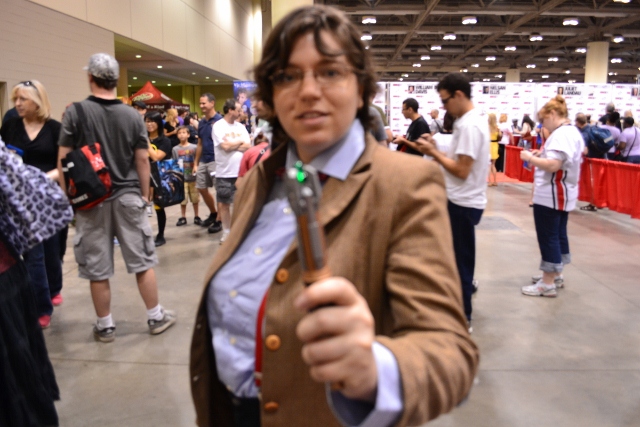 A female fan actually dressed up as the eleventh Doctor, that shows me that gender is not a factor when it comes to the passion these fans show and feel for their genres. It was a bonus to even see fans dressed up as his companions! One lovely young lady dressed up as my favorite companion, Donna noble, played in the series by talented actress Catherine Tate. 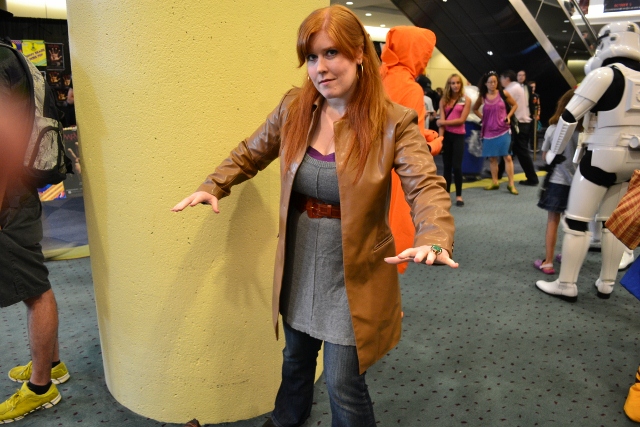 Another popular theme observed at Toronto Fan Expo was Star Wars. Many fans went above and beyond to showcase their love for Star Wars, not only by dressing up as their favorite character, but by creating Star Wars full life size mechanical figures from the movies. 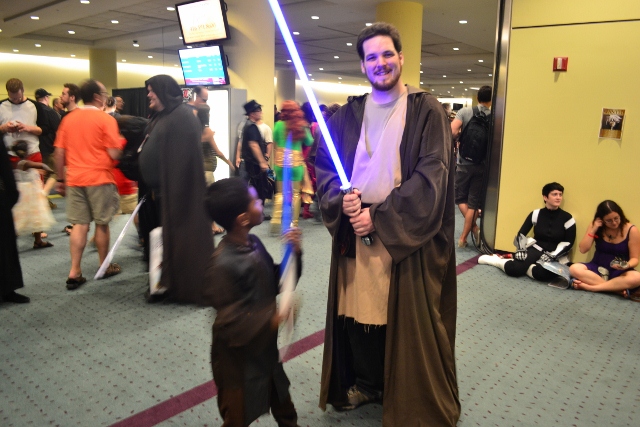 It is amazing that one science fiction movie from 1977, created by filmmaker George Lucas, could still be this popular world wide, and inspire the imagination of countless fans.

Another important factor that made this convention amazing was the service. Fan Expo employees would always be around when one needed them, always available, always reliable, and always had the right information to give a fan who needed help.

I have always felt that the best worker is one who enjoys what they do. I observed such behavior from the employees, conveniently located anywhere throughout the convention center.

One particular encounter with an employee was at the photo-op booth when I went to purchase my photo-op tickets for Amanda Tapping, John Barrowman, and Joe Flanigan.

Even as an official press representative, I did not mind sharing with the man at the booth how excited I was to be having another photo with all three of them. Amanda Tapping who have been my role-model for years, but a surprise to me when a man told me he too plans to get a photo with her since he is also a fan of hers.

Things like that fill me with pride because I can see that the employees of Fan Expo do not just think of their job as a paycheck, but as a way to see these amazing talented celebrities, who they are also fans of.

In my opinion, working close with any celebrity is a very important task, one that can be very rewarding, both as a job, but more so if you are an actual fan of that person, but it is all about showing proper respect. I made sure that every encounter I had with any celebrity, was both mature and respectful, especially meeting Amanda Tapping.

When a fan of a specific genre or television show approaches an actor, they are representing that community in some way, because how a fan acts with an actor is not only a reflection on that fan, but the actor as well, even that community. Every fan has the right to do what they please when it is their time with their favorite celebrity, but a little squee moments here and there with that celebrity doesn’t hurt. That is what I did. 😉

The two elements that really brought this convention together as a whole, as well as a success, are the celebrity talents that are gracious enough to attend this event, allow fans the opportunity to meet them, get photos taken with them, and have autographs signed by them. celebrities who attended this event are doing more than simply allowing fans the opportunity to meet and greet the, but give them that reason to go out, attend a special event, as well as meet their idol, or simply favorite star. Another important element is of course, the fans.

Fans came from not only Canada to attend this convention, but others from various places from around the world, such as Germany, London, America, and so on. The fans of today’s generation are continuing what science fiction fans did many years ago when conventions first took off, but after all these years, the ideas and passion that fans come up with to express their devotion to their crafts or genres have only grown.

As an entertainment reporter I observed how every fan is different. Many attend conventions for different reasons, but that does not stop them from fulfilling a goal or dream they have in mind, as well as meeting new friends in the process. It is very easy for friendships and/or relationships to get started at an event such as this. People often start friendships in a line while waiting to meet a celebrity they both admire.

This is yet another example of the positive influence celebrities have over fans, that a single individual can allow one fan to become become a friend to many other fans. I speak from experience.

That concludes my report for day two of Toronto Fan Expo. Thank you all for reading so far. My thanks to Wormholeriders for allowing me to share my story from Toronto Fan Expo with all of you.

However, this is only day two. I promise you the fans, my reports are just getting started. Stay tuned for day three shortly. My next two reports will be filled with more details, exclusive photos, and my personal favorite, lots of Amanda Tapping treats!

I must say, having met Amanda Tapping at Dragon Con last year, I was mega excited to be meeting such iconic, inpriring actress again. As one can relate to, Ms. Tapping far exceeded what I had expected. But that is a story for another day. Come back soon for my day three report!.

Thanks to Kenn for audio embedding, hyper-linking and putting finishing touches on my Toronto Fan Expo day two report.

I would appreciate it if you could leave a comment here or if you prefer, click the social media icons below to share this news article.

Also, please visit me on Twitter, by clicking the text links or image avatars in this news story. I and the WHR team thank you for sharing the fun with us. Thank you.

2 thoughts on “Toronto Fan Expo Canada: Day 2 – Doctor Who, Back to the Future, Star Wars, Costumes, and the Fans!”

Sun Sep 9 , 2012
Saturday morning marked day three of Toronto Fan Expo Canada, For me professionally and personally, this was the turning point at the Metro Toronto Convention Center , as though the previous two days had been leading up to the weekend. Saturday was the day that not only my favorite celebrity would […]