Another San Diego Comic-Con for the books and this year’s was great. Not only was it the 50th (yes, that’s right) anniversary, but it was also the biggest to date. Most people think that a comic-con is just movies, TV shows, gaming, and other crazy fun things. There is a lot that is covered and one of the subjects that gets overlooked is music.

Do you ever think about your favorite TV show, movie or game without music? Weird, huh? Not really!

Now, I am not talking about just the lyrical songs that are part of the soundtrack, but the theme music, the background music, the instrumental music that accompanies the drama, comedy, action part of what you are watching.

The musicians behind these amazing sounds are often forgotten as they are in the background and not an actor or explosion.

Well, not at #TeamWHR and I am here to change that! I am here to introduce to you a fantastic composer/musician who has contributed to some of the most popular shows, movies you’ve seen. His name is Jason Lazarus!

I had the great pleasure of interviewing him for his very first Comic-con appearance in San Diego and it was a lot of fun and informative. He’s worked on such movies and TV series as Stuber, Straight Outta Compton, Quantico, Dead of Summer , Oblivion, Allegiant, and his latest project Teen Titans Go! Vs Teen Titans.

As a composer, including his latest work for Teen Titans Go vs Teen Titans, Jason doesn’t listen to many scores or film music, instead his influences are electronic music and classical (naturally!). Mentioning the unbelievable composer of countless film scores, Hans Zimmer, Jason recalls one of his influences is The Dark Knight and Inception.

When scoring films and TV there is always a time issue, something with Jason had addressed. TV you have a much shorter window to get the music done and to the project, whereas with film there is a bit more time. The pressure is always on regardless of what genre you are working in and being precise and diligent always helps. The differences are also scope, no doubt composing for a theatre is vastly different than composing for a TV sound system. The bass is different, the scale, everything is different. Just think about when you are watching a movie and that sound comes out of the speakers to shake the theatre, how awesome that is? To experience that viscerally is always a treat.

I asked him what a favorite of his was that he composed and what show that is out now that he loves. With all the recent content available on Amazon Prime, Netflix, Hulu, etc., he mentioned two recent ones. For Amazon it was Jean-Claude Van Johnson which he had a fun time going a bit out of the box for him and the other is, of course, Stranger Things. No doubt we agree on Stranger Things, I mean, who doesn’t like the music from that series?

With all the different genres of film and TV, Jason likes to score action the best. No surprise there. That type of genre always seems to have the best type of scores, heart pounding, and edge of your seat type of music that you immediately connect to.

To hear that Jason “cut his teeth” (great term) on comedy when he was in college made me very happy. As difficult as the other genres may be, comedy has one very particular challenge…timing. As a director myself, I can tell you that timing is everything and in comedy if your timing is off even a few seconds then the whole thing is off and that’s pretty much suicide.

Jason explained the difference between scoring for action and drama. In action you have to be careful not to compete with the sound effects, to ‘keep the energy going”. Most of the time the music get lost in those type of scenes, because of the explosions, gun fire, etc. that is also happening in the scene. With drama there is a fine line you have to walk. You don’t want it “too melodramatic or cheesy” which makes perfect sense. How often have you watched a scene and the music fit perfectly? It’s truly an art form.

One of the best answers I received from Jason was, when I asked the question about what advice would he give to anyone wanting to do what he does. His answer was “find filmmakers” and “just do it”. Find a network of filmmakers and help each other. “You gotta learn by doing” which is something I have always said. Hone your instincts and skills, keep doing it, practice makes perfect.

When I asked him to name is top 5 composers in any genre he said Jonny Greenwood and mentioned his band Radiohead, I think I’ve heard of them (wink, wink). Johan Johansson who was the composer for The Theory of Everything, Hans Zimmer who definitely left an indelible mark on movies and of course John Williams who has basically done everything and then some. He was stuck with four, so I threw out Ennio Morricone who is as much of a heavyweight as John Williams.

Jason had made the point that with both Morricone and Williams being in their 80s they still have the ears of youth. Meaning that their age hasn’t lead them down a softer musical path, but they keep making contemporary music that holds up and will become as iconic in this era as it has with their past masterpieces. He mentioned Jurassic Park as a favorite of his from John Williams and I would have to agree with him. For Ennio, he couldn’t give me a specific film title, but he did mention he found a treasure of Ennio’s. He found an album from the 60s of psychedelic music, not movie music at all. He definitely can tell that Ennio still uses some of those accents in his film scores, his signature is definitely there.

As the interview ended, I asked the burning question, what’s your social media handle? Sadly, Jason doesn’t have one, but do not fear, he does have a website Jason-Lazarus.com for you to check out with music for your listening pleasure. It was such a pleasure chatting with Jason and I have a feeling that we will be hearing a lot more from him in the years and years to come.

Thank you for visiting WormholeRiders News Agency. And thanks to Kenn for video embedding and additional images for my report. I will be back in the near future with my next interview with the cast and creators of the new hit series Pandora on The CW Network, followed with more on my ongoing awesome adventures at San Diego Comic Con 2019!

One thought on “Jason Lazarus – Composer Extraordinaire Interview at SDCC 2019!”

Pandora at SDCC: Science Fiction for Humanity - Great New Series at The CW!

Tue Aug 20 , 2019
Hello fans and friends, This year at San Diego Comic-Con I had the great pleasure of interviewing the cast and creators of the new The CW show Pandora for WormholeRiders News Agency! Think about Earth, 200 years into the future and you have lost everything. Not only is Pandora a […] 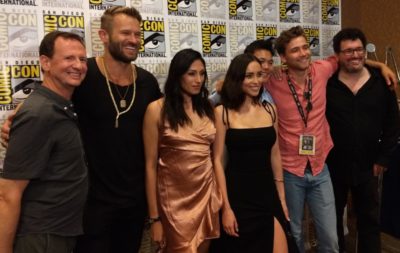