Here we are, we made it! Columbus, Ohio for Origins Game Fair 2014, presented by GAMA and cosponsor Mayfair Games. This will be just a quick blurb to check in with you, the fans, as we check in today and plan our weekend. 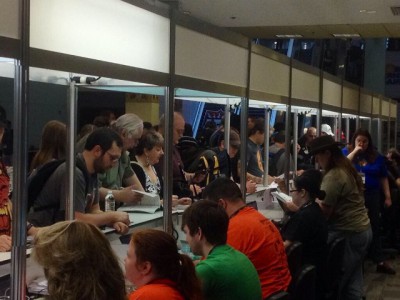 There was certainly a brisk business on this mostly prep day before things really get into swing for the rest of the convention. This fifth day, which is actually the first day, was a day for the gamers, for those who always come the day early just to socialize, game, and get their weekend set up. Practically speaking today was awesome, great job by the organizers. Assuming most attendees are like us, all badge and ticket collection was conducted at our convenience AND any headaches could be sorted out in a leisurely and expedient fashion without the usual crush of a Thursday Day One.

After collecting our badges, event tickets and books, and our loot, we began our investigation of the gaming and the convention center. Again, today’s schedule consisted of games – collectible card games, tabletop, miniatures, the electronic in the form of the Battletech Pods, and role playing games filled the slate. The major halls and sights (such as the Exhibit Hall, the Art College and Art Show, Seminars, and the like) will open tomorrow, Thursday (as tradition would have it). We had the opportunity to walk through the Board Games Hall and check out the ghost town as it was being set up for its impending chaos over the next four days. 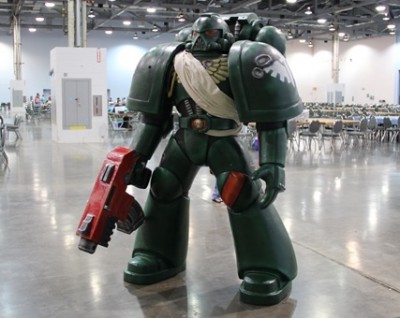 From the Board Games Hall we meandered into the adjoining Miniatures Hall, whose entrance was being guarded by a Dark Angel from the Warhammer 40K universe. Games Workshop and Warhammer 40K took up almost one quarter of this hall with their products – from a Space Hulk table to tables set up for Cool Mini Or Not’s new game Rivets. Hosted by Origins40K, Rivets is described in their Event Guide as “WWI meets Steampunk meets Action Comics”. It is an intro game and promises ease of complexity (we are slated to participate in a demo Thursday afternoon). Back in the Board Games Hall, we found Asmodee set up and already demonstrating a host of their favorite games. 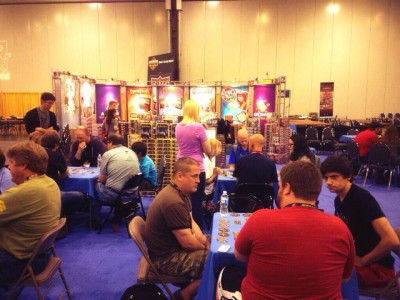 Brought to Origins Game Fair 2014 by Virtual World again this year are the Battletech Pods. A standard with us, and a favorite to the convention and its attendees, a Battletech Pod immerses you in the game. You jump into a cockpit – a seat, two pedals on the floor, a throttle, a joystick, multiple monitors, and door that closes to that complete the experience. You pilot a “mech” that you have chosen based upon size, armament, speed, and tonnage – each “mech” is uniquely different and is played and used differently based on purpose and skill of its pilot. You are then “dropped” into a random setting and play against five other pilots over a seven minute mission to rein destruction on your enemies! 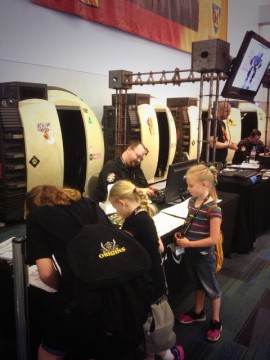 As Wednesday winds down, we look forward to the next four days and what they may hold. We hope to catch up with such renowned creators, distributors, and publishers as Stronghold Games (who have brought the gaming world “Survive: Escape from Atlantis” and their latest hits “Space Cadets” and “Space Sheep”), Catalyst Game Lab (who are responsible for the classics and always great “Shadowrun and Battletech), Japanime Games (whose hits include “Krosmaster” and “Kanzume Goddess”), Asmodee (who have brought us “Jungle Speed” , “Seasons”, and “7 Wonders”, and now introduce a board game to the online hit “World of Tanks” and also “Timeline”). 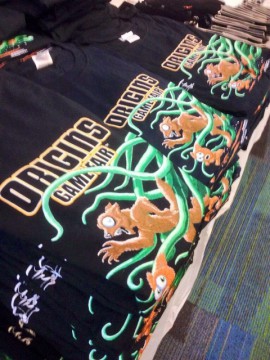 Also a standard, is the Offworld Designs presentation and production of Origins Game Fair collectibles, this year featuring Crit. WormholeRiders is also looking to catch up with Guests of Honor Tracy Hickman and John Kovalic, as well as Special Guest Alaina Huffman, who at the very least we will see as she will be hosting the Origins Awards on Saturday night, we will be in attendance. There will be many things to do and see over the next few days, so please look for tweets from myself and WormholeRiders photographer @MAULTBC. We hope that you enjoy Origins Game Fair 2014 through our Tweets and Vines, and hope to see you here again next year! Ciao for now, we will be back later with wrap up reports!

Tue Jun 24 , 2014
Welcome back convention fans! In our 6th year of operations here at WormholeRiders, we have attended hundreds of conventions, both of a science fiction and science nature. We have always been delighted by the quality of such distinct events. This year in 2014, a new effort combining the mathematics, arts, […] 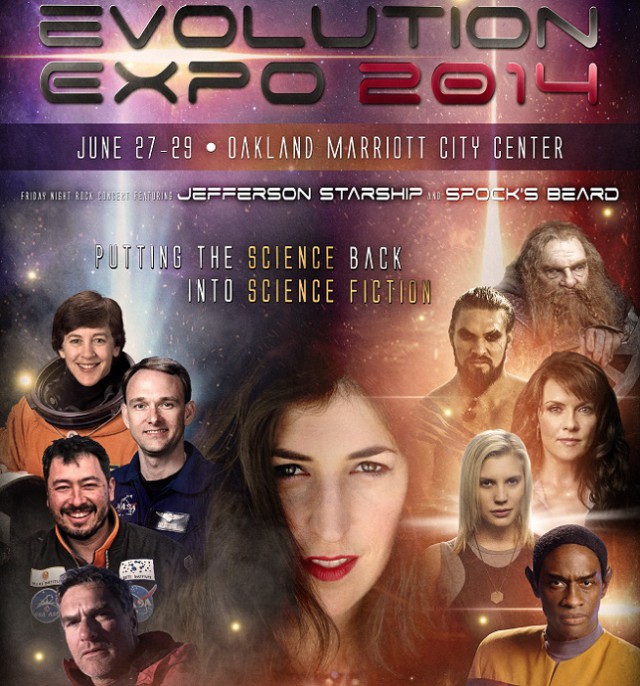