What an event it the weekend of April 27 – 29 2012 was at the BMO Centre for the Calgary Comic Expo. I have not been able to get official numbers, but more than likely we have blown away our 50K attendance from last year. Early reports state that at least 50,000 people attended the event on Saturday alone! 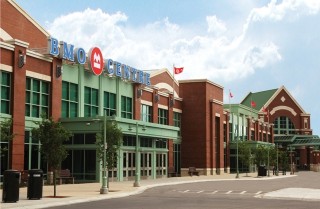 The biggest impact though is that once people were in the BMO Centre building, most did not leave until the very end of the night.

The only time the halls even seemed less crowed was when they packed into the BMO corral area for a specific guest speaker.

Editors Note: Special thanks from Team WHR to Art of Edmonton Canada and Patricia Stewart-Bertrand of Cold Lake Canada for their assistance helping to make this Calgary Expo news story possible.

Patricia, thank you for staging the text in this news article and Art for working with WormholeRiders News Agency for providing many of the images used in Newton’s news article final proofed by Kenn.

Many thanks also to our new contributing author Newton Hislop! 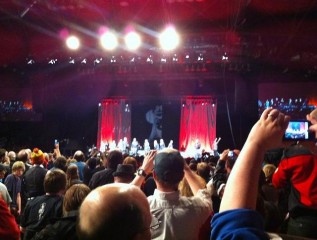 The atmosphere of the event was full of excitement and anticipation for the upcoming show. I worked until 4:30pm, however the doors opened at 1pm. There was a constant stream of people coming into the building. Luckily, the line ups were not too long.

At 6pm that evening, it was beginning to feel crowded and the panels were being filed up. There was still the ability to move around fairly well and get to most of the vendors at the event.

The photo lines were busy but the lines but were moving at a fair pace. I give credit to all of the volunteers who put up with many confused people who remembered last year’s setup but still seemed lost with the changes implemented in 2012. The organizers made some changes to accommodate the larger number of photo opportunities or photo-ops. If you wanted a photo op it was essential to line up in one line at the photo entrance area. 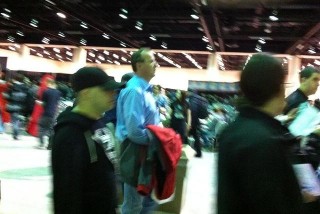 The line winded down to the food court. The scrum in front of the doors was for the people getting picked to go into the lines for the photo. Only one line for one photo session was allowed in at a time and the big line consisted of everyone, so people would pile in allowing the ones for the line to make their way into the right lines.

Once inside the photo area there were two photo stations, with lines for two different groups possible. The queues were almost always kept full taking as many people in as possible. Once you made it to the staging area you were asked to leave your stuff on a table and then stand at places marked with tape.

The volunteers at every step were there to help people in. My only recommendation for the 2013 setup would be to add a barricade to the area of the curtain. The other side of the curtain was a public area and had no barricade. I would ask for an area where you can’t put your hand through a curtain, grab things and run. I am sure that attendees would feel safer that way.

My first photo was with Levar Burton (Geordi LaForge) Star Trek the Next Generation (STTNG). Levar is my childhood role model and someone I respect. I fortunately got through the photo opportunity line quickly and efficiently. 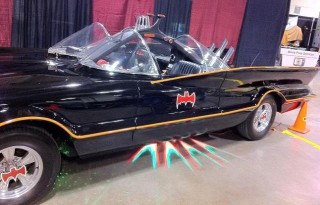 Mr. Burton was very personable and friendly for the photo but there was as little talking time possible to keep the line moving quickly.

I spent the rest of the night enjoying the sites and panels I could get into. 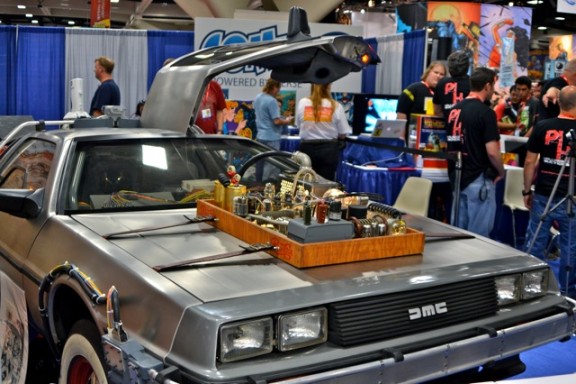 Lots of fun included the local bus stop that was made up to look like a transporter, the Back To The Future Delorean and the Batmobile!

There were many interesting things to see including a twelve foot high robot plus a different five foot tall robot that was motorized and moving around. 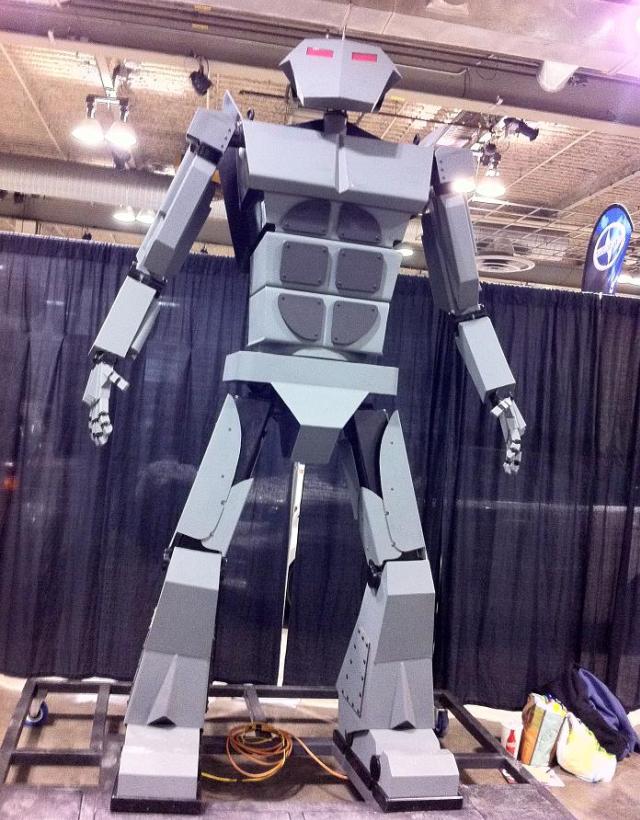 This was the big day in more ways than one; the show suffered from its own success. The Calgary Fire Marshal forced the doors closed for 2 hours due to the overcrowding of the hall. Lots of people were saying they over sold tickets to the event. I am not so sure since the organizers are nice people.

Many fans were elaborately dressed in costum 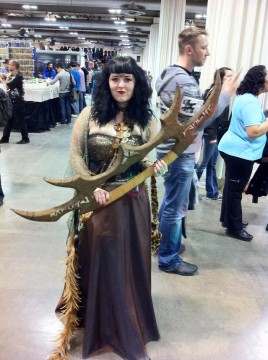 e for Cosplay fun. Some were not able to get in while many thousands of others were more fortunate. I do not believe this situation was out of greed, but rather it was the organizers trying to allow as many people who want to be there to get in as possible. “Walk in” ticket sales were huge. I feel that no one realized how fast the hall had filled up until it was too late.

It does take time to slow down the line and it was apparent that the organizers wanted to make the lineups outside move as quickly as possible. The second factor working for them was because of the Star Trek TNG reunion event.

Everyone wanted to be in that hall that day. Once in you stayed in all day if you did not want to lose your seat, so not many more people could get in after 11am. There were many people very upset over buying weekend passes and unable to gain entry on the big day.

People began lining up before 8 AM, and, before the event opened the lines stretched over 500m or a football field length from the entrance of hall D down the concourse, outside back in front of the building towards the train station where it split into two and then to 10th street. I heard reports of people taking up to 4 hours to get close to the gates and then being told the building was closed by the Fire Marshal and no one was allowed in. The lines never shortened once, because as many people showed up as were let into the building. 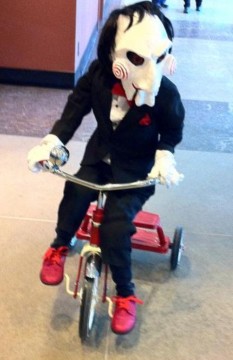 The second major problem happened to be the scrum. For non-Canadians, a scrum means a tightly packed group of people with a similar goal.  Since the scrum in front of the photo area was the place to be, people began pushing to get in. I am not sure when the volunteers lost control of the line but when they did and the entire corridor got blocked with thousands of people all trying to get into the photo op area. The volunteers were now forced to just try to keep people from breaking down the barriers and rushing the photo op lines.

The access in and out of the autograph area was also blocked except along the wall were the event entrance was. The scrum wound up going into hall C leaving everyone feeling like the organizers oversold tickets. Sadly there were no booked time slot and every one only wanted tickets on Saturday the day of the Star Trek TNG event. Many people were forced to wait until Sunday for their photos.

Most of the panels were lined up and overflowing on Saturday as well. In any event in the building was standing room only or no further admittance.

I want to send a special thanks to all the volunteers, staff and organizers who put up with so many irate and upset people. I know there were mistakes made, but the fans can be a little more understanding too in some cases. I do not think it is right to engage in physical shoving of a volunteer ever, or yelling at one. So, to those people who worked so hard all weekend, GOOD JOB.

The autographs were just too full for me to be able to justify the time involved in lining up. So I moved on to the panels were I could find room, but just spending time walking in the halls with my fellow Geeks was what I enjoyed.

The event for Star Trek Exposed was well worth the $80 price to get in. I loved the comedy and surprise twits in the show. Most of it was scripted, but the acting was top notch. Question and answers from the floor were also funny. To get to ask a question of the cast you had to win a contest. One girl had such a tough question for Sir Patrick Stewart (Captain Jean-Luc Picard) that he had to ask for her phone number to give her a real reply ( I wonder how many people wish they were her right then).

John de Lancie (Q) showed up half way through the exposed event, generating a huge uproar from the crowd. The interactions of the cast were just amazing. It was clear to me that even so many years apart there was still chemistry between all the cast. John stayed late to sign autographs in the concourse receiving many well-wishes form the crowd. 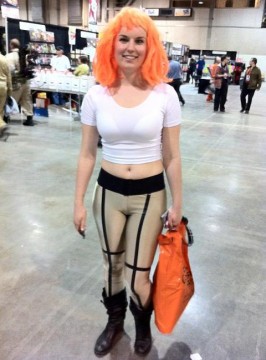 The show staff, moving to avoid a repeat of Saturdays troubles, closed the door to all non-paid guests. This left long lines of people in the front of the building somewhat upset. But everyone who prepaid now could get to the show, unlike the previous day’s situation.

To everyone’s surprise most of the stars were sold out for their photo ops and some even stayed late, skipping lunch to see as many fans as they could before leaving. I managed by some miracle to get all my missed photos from Saturday completed in 5 hours.

The most popular photo shoot included the Star Trek TNG crew. More volunteers kept much better control of the crowd then the day before. After talking to several people I heard that an emergency meeting between the organizers went on till early morning in order to decide on the best actions to take for Sunday. I appreciate the volunteer group who put on this show always being very active in deciding what was going on. 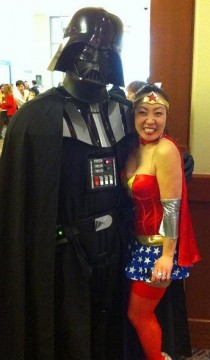 Unlike Darth Vader of Star Wars, I want to point out that the staff were very understanding. I originally planned some photos to happen with friends on the Saturday and my group were going to split the cost of the photo.

After the Saturday lines, and some people unable to get in, we had too many reprints, but the staff were excellent in dealing with me to insure I would still be able to get my photos and get me the refunds for the extra prints I no longer needed.

I really respect the organizers for clearing it all up and insuring that I paid a fair price (I still paid full price for the photos, but did not have to pay for the reprints and got the extra money back).

My hat goes off to Eric and others who made it happen and still apologized for not getting me the photo on Saturday. That was real customer service! Thank you Calgary Expo!

Sunday late afternoon saw the lines die down and there were several last minute deals to clear off merchandise. The piano auction got a fair amount for charity producing an overall feeling of success for the event.

I look forward to next year. Several volunteers were saying that it will be bigger and better next year. I do not know how they will make it any better. It was great this year. I do advise anyone who wishes to go next year to pre-purchase their tickets well in advance and to be patient at the event. Nothing is perfect in a show of this size.

Lastly, it was my experience that the Calgary Expo staff will do everything in their power to help you out!

Many thanks to you for reading and you for visiting WormholeRiders News Agency to read about Calgary Expo 2012! 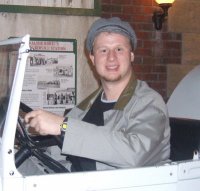 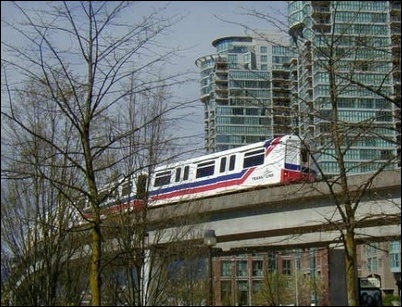