Who knew that in the midst of all the hustle and bustle of this incredible 2012 Calgary Expo, that we would find a space as comfy as our own living room?  Even though, we were actually sharing our ‘personal’ living room with over a thousand other folks that did not seem to matter.

All the Fringe fans in attendance were looking forward to Space Channel’s exciting FRINGE Panel with the engaging, Jasika Nicole and John Noble, was just that; simply like having a chat in your very own living room.

Host, Ajay Fry, of the Space Channel immediately made this audience feel ‘at home’.  Within minutes, we were whisked into the inner circle and the innermost workings of the brilliant series “FRINGE”.

Jasika and John shared personal stories and delightful moments from their experience as part of the cast and team that bring this incredible show to our own living room’s each and every week. 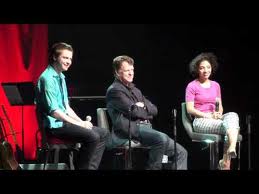 AJay Fry prompted John Noble and Jasika Nicole with questions about each of their Fringe characters.  Wanting to know more about how each gifted actor prepares their characters for each show and each storyline the fans were eager to hear from John and Jasika.

Just how does this talented ensemble cast work so well together?

How do they navigate the tougher storylines?  Brilliant stories.  Stories, which tweak at our collective emotional core; amidst the intellectual ‘candy’ of the universe we know as FRINGE.

Simple.  They’re a T-E-A-M.  They’ve learned to work in a way that is both methodical and creative to keep the ‘truth’ of who each character is, on track.  This is especially crucial when living their characters in both the FRINGE world of “Over Here” and “Over There”. 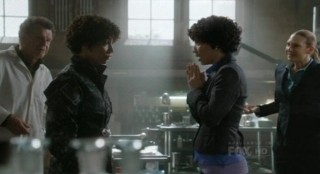 AJay Fry spoke to the FRINGE episode, “Making Angels” which featured Jasika’s character, Astrid, in a dilemma between “Astrid over Here” (AoH) and Alt-Astrid or “Astrid over There” (AoT).

Jasika shared her experiences in how she learned more about who, Astrid, actually was, and is, over time.  Why, Astrid grew so close to, Walter and how closely, John and Jasika, work with one another in order to develop the on-screen chemistry we see. 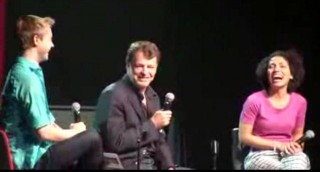 The audience lets out a collective giggle with, Jasika, as she, herself, squeals with delight describing reading the script for this episode for the first time.  It was a long-awaited opportunity and experience that she indeed cherished.

There were challenges in shooting the dual realities, both for the actors and for the crew.  Jasika’s focus needed to be sharp to be able to return to the pivotal emotional moments between both AoH and AoT in this episode.  No small feat at all. 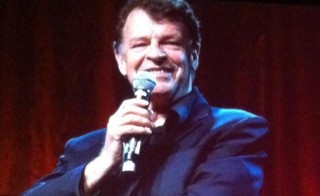 John addressed the need of any good actor to be completely ‘present’ when they are on screen.  Even when a character is in the background of a scene; it is critical to be present and focused, this shows through.  Being ‘present’ in the moment is a key to building a great scene for the whole team.  John spoke of how he looks to, Jasika, as a touchstone, on set, in many ways.

We observed that both Jasika, and John are very relaxed and at home with each other.  This translates to how these talented artists, are able to forge a strong creative bond on screen, while living in the dual Universes of FRINGE.

Our grand ‘living room chat’ opens up into a lively audience Q & A session, where the questions run a very broad spectrum.  Questions about who, exactly, comes up with all the names that Walter calls Astrid?  How does, John, prep for scenes in which, Walter, needs to take LSD?

Audience members ask John and, Jasika how they prep for intense scenes heavy with techno-speak.  What challenges, does Jasika, face as a character in a strong supporting role?  There are fits of laughter from the audience.  We are delighted with our journey into the inner workings, we simply want more.

There is a collective ‘sigh’ of gratitude, as, Jasika, affectionately refers to the Calgary Expo fans as simply doing things ‘in the Canadian way’.  Prompted by more audience questions, John incites more elated peals of laughter describing his all time favorite ‘versions’ of, Walter.  There is even talk of John’s experience in working with acclaimed Director, Peter Jackson, on the “Lord of the Rings” Trilogy; John is asked what genius is likely to emerge with Jackson’s long-awaited film “The Hobbit”.

John, and, Jasika, share their insights on what challenges will define the next season of FRINGE.  Where will the stories go?  What will happen with the Insurgents?  The Observers?  There is so much more to listen in on. Watch the whole video exchange here. 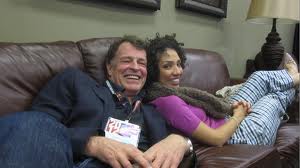 Alas, the time in our cozy living room has come to an end.  Our Calgary Expo audience is a happy one.  Our expectations have been exceeded.  We’ve spent quality time “Stepping into the FRINGE”!  We have glimpsed the inner workings of this series we all love.  We are delighted.  We are grateful.

We send a collective, heartfelt “Thank YOU” to John Noble and Jasika Nicole for sharing their stories, their humor and their insights with us all!    We hope that you stop by again, anytime – our living room sofas await your next visit.

A big round of thanks to the team at Space Channel and Mr AJay Fry for presenting this engaging and fun panel.  Kudos to the Production team at Calgary Expo for creating such a great space where magic can happen.  Our gratitude to Fox Television for bringing back the genius that is FRINGE for a brand new season – we wait with baited breath.

Writers: AJPproc, Dream2Screen (supervised by KleotheCat, who, incidentally, was very miffed he missed meeting Walter and Astro, err, Aspirin, errr Astrid at the convention! Kleo is patiently awaiting his guest cat-starring role in the new epic fifth season of FRINGE coming in the future on FOX Broadcasting!

Thanks to Kenn for final image and video staging in this news article, and thanks to you for stopping by WormholeRiders News Agency Conventions Corner!

Please feel free to leave a comment here, click an icon below to share this article and You Decide podcast with your friends, or you can visit and follow me, Dream2Screen (Carol Anne), and KleoTheCat on Twitter, by clicking on our avatars. 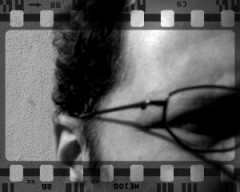 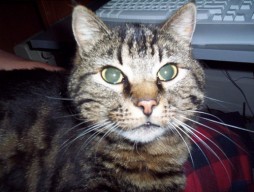 One thought on “Calgary Expo 2012: Stepping Into The FRINGE For Season Five!”

Thu May 31 , 2012
Hello Game Geek Conventions fans! For whom the bell tolls…ugh…it’s 3:41am…double ugh… If you opened ANY dictionary and looked up “morning person”, you would invariably see a picture of my husband (and to a minor extent, my 9 year old too); you would DEFINITELY find a picture of me listed […] 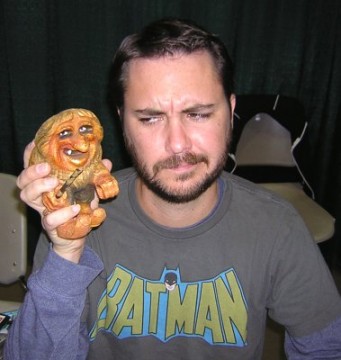