Welcome back for my Day two report at New York Comic Con (NYCC)!

Friday promised a day chock-filled with panels and screenings, and we hit the ground running again! Taking our favorite NY Waterway ferry across the Hudson to the Jacob Javits Center, we arrived at NYCC bright and early, well, as early as can be – we basically opened the place, and it was shortly after 10am as we entered the convention center!

Today was our exploratory day – spending a decent amount of time wandering the NYCC exhibitors’ hall, The Block, and Artists’ Alley, as we were planning a “panel day” for Day 3. We started in The Block, a plethora of anime and cosplay related establishments and businesses were to be found.

If you were looking for something more along the lines of the unique and extraordinary, you would most definitely find it in The Block. In The Block, you could find the BIG companies such as Toy Tokyo, Good Smile Company, and Tenacious Toys…and a special shout out to Brendan McGuinness a custom Kree-Ator in cahoots and collaborating with Tenacious Toys!

The Block itself opened up into the “great hall” near the Anti-Bullying Coalition booth and the NerdHQ Booth, and also by The Walking Dead “Get Zombified” and Hyundai Chop Shop booth/display. Once inside the great hall, even for a Friday morning we found ourselves swamped and surrounded by attendees also taking in the sights. At this point, we decided to take our chances later and head off to our first panel. 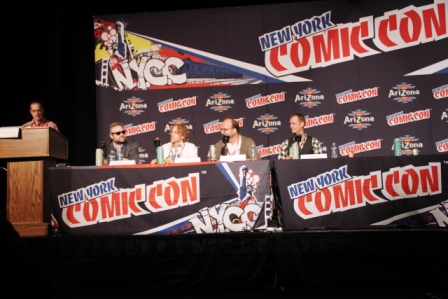 The first panel of the day for us was the “Falling Skies: The Magic Behind the Series” panel. As the description (from the NYCC Mobile App) reads (and the name of it, frankly) this panel “highlighted the behind-the-scenes elements of the show”.

Appearing as the moderator was TV Guide’s Senior Editor, Rich Sands; seeing as he covers science fiction for TV Guide, it was a natural fit. Members of the panel were the new 2014 show runner, David Eick, actor Keith Arbuthnot, special effects supervisor Todd Masters, and actor Doug Jones. Some of the biggest news from this panel was that TNT ordered 12 episodes for 2014 versus the 10 that has been since the series’ inception. 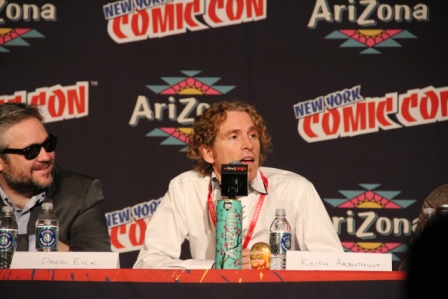 Show runner David Eick is no stranger to this genre, having served as a producer on such projects as Hercules: The Legendary Journeys, as well as numerous Battlestar Galactica incarnations and Caprica.

Having Mr. Eick at the helm for the next season of Falling Skies should prove invaluable when one starts to weigh experience and creative drive. Speaking about creative drive, when asked about how “they” keep the story fresh, how do they keep Falling Skies from falling into the cracks and from sliding into the same story rehashed, Mr. Masters responded with, “the special effects staff are driven to reinvent the wheel, we are all fans of the genre too, and this drives the special effects crew invent and keep the stories fresh.”

Todd Masters is also no stranger to the sci-fi genre, in addition to his work on Falling Skies, he has been involved with Sanctuary, The Vampire Diaries, The Twilight Saga: New Moon, True Blood, Fringe, and most recently, Fox’s newest hit series Almost Human.

Please enjoy the following behind the scenes video (above) that we had the pleasure of seeing at NYCC during this panel as well as the panel itself included below: 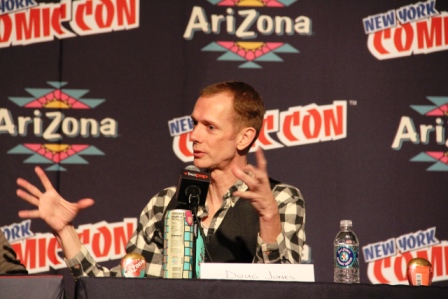 The two actors on the panel, Keith Arbuthnot and Doug Jones, are most responsible for bringing the skitters to life on Falling Skies. Keith being a master puppeteer, having brought to life many skitters through the arduous task of more often than not having to “suit up” as a skitter in a full rig and harness. Mr. Arbuthnot’s resume includes The Cabin in the Woods, and Honey, I Shrunk the Kids, and also the Stargate: Continuum and The Ark of Truth movies, in various capacities ranging from art department to actor to stunts.

And lastly, though not in the least – he is a WormholeRiders favorite – Doug Jones, who brought life to Cochise this past season, and will continue to do so through the 2014 season. Mr. Jones has also appeared in the Hellboy movies and another WormholeRiders favorite The Neighbors. More recently, Mr. Jones can be seen in the recently released Raze: The Movie and on Sons of Anarchy. Also, please enjoy this article and interview from WormholeRiders and Patricia Stewart and Kenn Weeks. 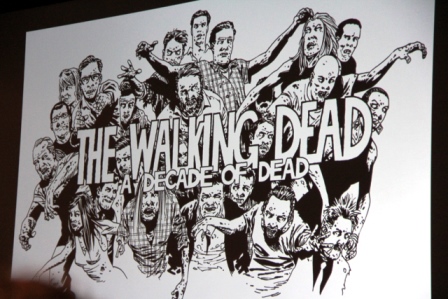 From the Falling Skies panel, we grabbed a bite to eat before returning to the Empire Stage for The Walking Dead 10th Anniversary Panel. No, you haven’t missed 6 seasons! It’s the 10th anniversary of the comic book! Both the author Robert Kirkman and the illustrator Charlie Adlard were on hand to celebrate and discuss the book and its influences and impacts on society that it has had over the past 10 years.

I found the panel very interesting when Mr. Kirkman and Mr. Adlard started to talk about the advances in technologies to the point of where neither had to travel for presentations, that the digital age has had a tremendously positive impact on their work as well as opening up endless creative possibilities. 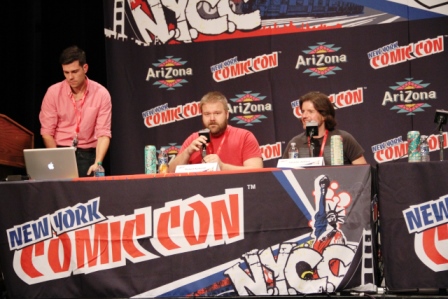 With The Walking Dead 10th Anniversary panel ending in the mid to late afternoon, we went back into the great hall to take our chances moving through the masses, after another sanity reclamation period in the Press Lounge. We started at the “opposite end” this time, working our way from our right to left, up and down the crowded aisles, taking in all the sights, sounds, and smells.

Before we knew it, moseying through the great hall takes up a lot time if not paying attention, being locked into moving with the crowd or stopping to check out vendors’ wares, we found ourselves starting to move toward our next panel. This panel was a three pronged foray into a trio of the Starz Channel’s new shows: Black Sails, DaVinci’s Demons (their second season), and Outlander. 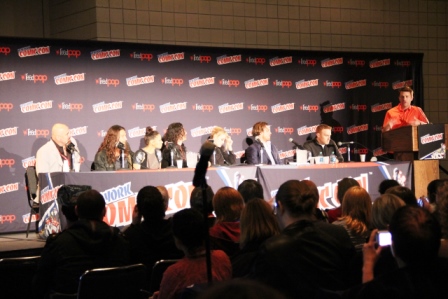 First up was Black Sails, and appearing on this panel were its creator Jonathan Steinberg and its stars: Toby Stephens, Hannah New, Luke Arnold, Zach McGowan, Jessica Parker Kennedy, and Mark Ryan.

Mr. Steinberg touched on the influences of the classic Treasure Island (by Robert Louis Stevenson), and how the Treasure Island itself “seemed like the epilogue to something bigger.”

Especially since Black Sails follows Captain Flint and his prates in the twenty or so years leading up to Treasure Island. Mr. Ryan said too that “Black Sails is not a pirate show, it is THE pirate show. Please enjoy this short video into the world of Black Sails: 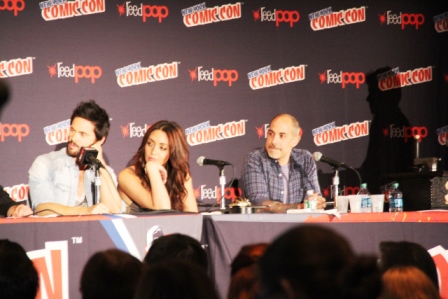 Up next on docket, was preview into season two of DaVinci’s Demons. Appearing on this panel were the show’s creator David Goyer, its cast: Tom Riley, Laura Haddock, Blake Ritson, Greg Chillin, and newcomer Carolina Guerra made for a  very interactive panel, for every question (deemed thought provoking by Mr. Goyer), each questioner was presented with a piece of swag, an “artifact” signed by the cast.

This second season of DaVinci’s Demons promises flashbacks and new character introductions, such as “Ima” (portrayed by Carolina Guerra), and it promises that we will learn more about the Sons of Mithras, and the Book of Leaves – the mythical tome that has sent daVinci toward the new world and into conflict with the (ancient) Incas. We also learnt that Amerigo Vespucci will become a regular character in season two. And now, a short video into the world of DaVinci’s Demons: 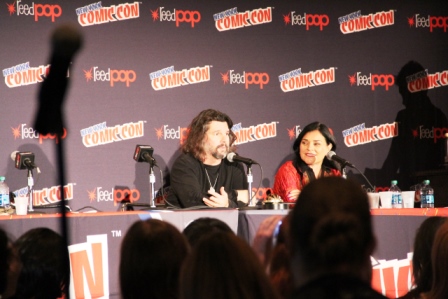 Finally tonight in Starz’s triumvirate of previews was a look into the much anticipated Outlander. This panel featured only the story’s author Diana Gabaldon and its executive producer Ronald D. Moore. The two main stars, Caitriona Balfe (Claire Randall) and Sam Heughan (Jamie Fraser) were unable to attend due to the commencement of filming.

I found this panel very cool, to use the vernacular. I say this because, both Ms. Gabaldon and Mr. Moore seemed to “finish each other’s sentences, they seemed very comfortable with each other, each possessing a singular and particular vision for the adaptation of the books to the series.

Mr. Moore’s elaborations into the process included his spending 2 days with Ms. Gabaldon convincing her that he and his crew were THE crew to make a truthful adaptation – especially since Mr. Moore did NOT want to mess up his wife’s favorite book!

As Mr. Moore put, their job is to make sure that the show is true to the book, to bring the book to life, not to reinterpret and change. Ms. Gabaldon also admitted that book eight of the Outlander series, “Written in My Own Heart’s Blood” is not the last, that there IS more to come. Now sit back and click on the image below or following link to get an inside look from Starz on Outlander: 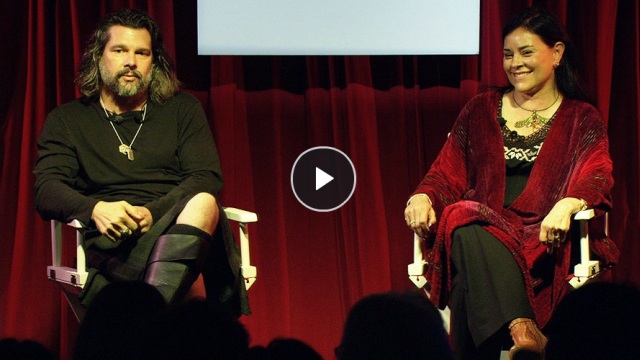 Well that is the end for us from Day 2 at New York Comic Con 2013. Stay tuned and keep those keen eagle eyes open for our Day 3 report. Thank you for taking the time to stop here at Convention Corners at Wormhole Riders News Agency, and to Kenn for the final staging and editing of this installment! Keep reading and wanting for more, and you never know, you may just get more! (Trust me, there is more!)

Tue Dec 17 , 2013
Welcome back! It’s Super Saturday!!!! Back again for Day 3 of New York Comic Con, we hit the ground running! DATELINE: Saturday, October 12, 2013 We ran into a couple of our friends on the NY Waterways ferry across the Hudson again, it seems that this particular weekend in October […] 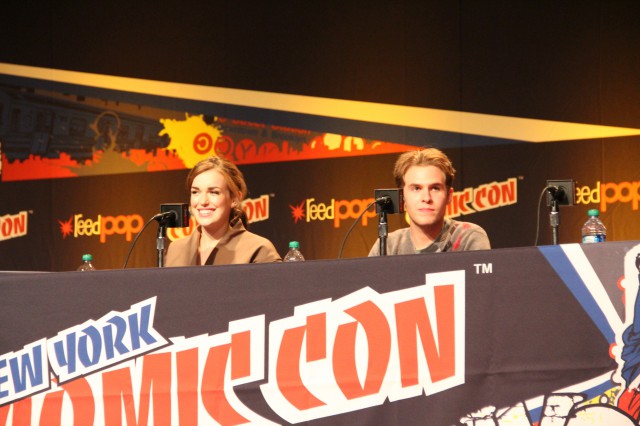