On Saturday July 14, 2012 during the Comic-Con 2012 entertainment and geek convention in San Diego California, we had the honor of interviewing talented Mark A. Altman, writer, producer, director and creator of Femme Fatales, the hit series just finishing it’s second season on Cinemax!

Comic-Con is Mecca for hundreds of thousands of geeks and nerds everywhere, it is a chance for them to mingle with their icons and get a chance to show their talent at the art of comics. It is a chance, as well, for fans (like myself) to get a glimpse of their favorite television stars in the flesh.

Con 2012 in San Diego was an amazing experience, one that I will certainly never forget. It was my first time at the convention of all conventions. It was daunting at times, and although lines were long, panels were fun and I saw so many costumes it looked like a Halloween party in full force.

I had many interview opportunities, but the one I loved the most were my interviews with the fabulous cast and creator/director of Femme Fatales. With the beautiful backdrop of San Diego’s blue sky behind us, I had my first interview. It was so much fun interviewing the gorgeous women of the show, all of them femme fatales in their own right. The one person, though, that I was most excited about was the jack of all trades Mark A. Altman. 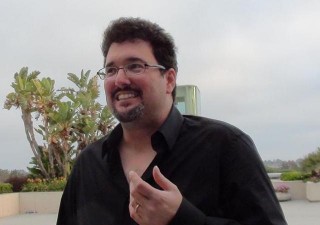 It was a pleasure to be able to interview a fellow director, I felt as if I were talking to a kindred spirit. His passion for his craft was infectious, I left the interview with the same energy that he had and was happy to know that there are other directors out there who truly love their craft.

The one thing that Mark made mentions of several times throughout the interview was his love for film noir and how it inspired him to create this wonderful show. He had pointed out that an anthology show had not been done before and it was a refreshing idea and one that should be explored.

I had also asked him what, in his opinion, made a woman a femme fatale?  What was it that he looked for in the actresses to play the femme fatale roles? It is not an easy role to play, so casting is crucial. He mentioned the great femme fatales of those great film noirs, Barbara Stanwyck, Gloria Grahame and Marilyn Monroe to which I added Jane Russell and he ended with Ava Gardner. He wanted actresses that could tackle the task of making authentic the classic dialogue that goes hand in hand with those types of roles. 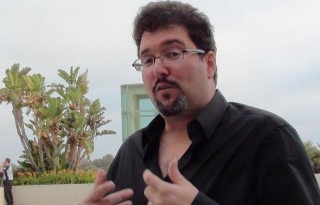 He wanted woman that could be the real definition of what a true femme fatale is. He also brought in a perfect team from fellow writers and directors to help bring this vision he had to life.

I like that Mark keeps true to the film noir theme, he had said that when he is writing a script that he tries to keep the touchstones there, for example the black widow or how the movie Key Largo inspired an episode. His love of noir is evident in all the wonderful films that he mentions that are part of his influences. “We often looked to the past to color what we are doing” he said and I agree, without movies like Double Indemnity and Sunset Blvd. we would probably never know what a dead man is thinking.

He also mentioned that how in this season he added elements of sci-fi and superheroes, how the formula is very elastic, which makes for great television. I find that refreshing, so many times you watch a show and it tends to be redundant, the formula is cut and dried, no room to move. 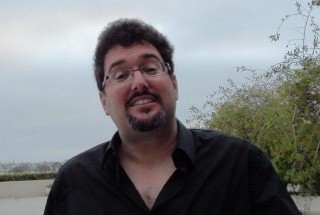 The one thing as a director you always do is give your cast notes. I asked about any that he may have given to his cast about a certain movie he wanted to emulate or a performance he wanted the cast to look at and take note of.  In a recent episode he directed called Family Business which co-starred the brilliantly talented Eric Roberts, he had mentioned that he did indeed give the cast a movie that they did find helpful.

His enthusiasm about directing Eric Roberts showed tenfold. It was such a pleasure to hear him talk about his experience with him and how you don’t direct Eric Roberts, you let him loose. I agree completely, Eric Roberts is one of those actors that has so much talent and so much experience in his craft that any notes you give him will be moot. He does not need them, if anything you are the student and he the teacher. When you are the actor from some of the most iconic films in celluloid history such as Pope of Greenwich Village and Star 80, you are free to do as you please and have everyone around you in awe. 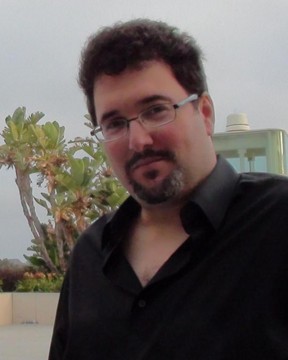 It was great to know that he and I have the same love and admiration for Billy Wilder, the master of things noir. Altman made a great point about how Wilder’s films could toe the line of different elements…how his dramas had comedy and vice versa. One of the things that I love most about  Wilder is, here is a man who came to this country knowing about a dozen words of English and co-wrote some of the greatest scripts ever. The other directors he mentions are definitely powerhouses in their own right as well.

As a woman, I admire what he is doing with this show. He made a point that he is not trying to portray women in a negative light, which often times people mistake femme fatale for black widow. He made a great point about how in one episode the character found her inner strength due to her circumstances. It is nice to see a show where woman can embrace that part if themselves and not be considered a bitch or any other derogatory name you wish to pin on the female gender.

In conclusion, as a director I am always happy to share and talk about my craft with others who are not familiar with what we do. It is especially gratifying to interview a fellow director who not only has a love of noir like mine, but rivals it.

I wanted to thank Mark for giving us a peak into the world of Femme Fatales. We hope to see you again soon as we run exclusive interviews with all the wonderful Femme Fatales who attended Comic-Con 2012 and await the fantastic season finale on Cinemax!

We hope you enjoyed our interview with Mark A. Altman creator of Femme Fatales and thank you for visiting WormholeRiders News Agency.

Tue Jul 31 , 2012
Hey Femme Fatales Fans, On Saturday July 14, 2012 during the Comic-Con 2012 entertainment and geek convention in San Diego California, we had the honor of interviewing the marvelous Madison Dylan, star of the hit series Femme Fatales. About to complete it’s second season on Cinemax! we were honored to […]