Mr Barry has tremendous talent that is obvious to anyone who has followed his successful entertainment career that began in the 1990’s as a cameraman in the hit feature film The Russia House starring Sean Connery and Michelle Pfeiffer! Mr Barry marched towards directing and producing when he wrote the screen play for one of my favorite films, The Art of War (2000) starring the talented Wesley Snipes!

One of his crowning achievements, Continuum series garnered eighteen awards and was nominated for many more! Now Executive Producing Ghost Wars, Simon Davis Barry has hit a grand slam with a tale that blends the supernatural! During our exclusive interview with Simon Davis Barry, he revealed the premise for the program which has blossomed into a series that deserves many more seasons. Moreover, #TeamWHR is more than delighted to learn details about the supernatural show, and in the opinion of this editor, his awesome alien invasion series that has become manifest in Ghost Wars!

We have been excited by the Ghost Wars story arc thus far and were frankly fascinated when the alien meteorite, being investigated by the nefarious corporate villain Lamda Corporation, was shown on screen in ninth episode, “Post Apocalypse Now”. Airing on December 07, 2017, the revelations during the episode were numerous, including when Father Dan (Vincent D’Onofrio) was almost killed by an alien with tentacles that nearly strangled him!

Simon Davis Barry has written three of the episodes in the first season of Ghost Wars including the season one finale thirteenth episode that will air in early January 2018.

We are extremely excited to learn the fate of the malevolent baby alien born in the episode “The Feast” which aired recently on December 21, 2017 on SYFY!

Our intriguing interview with Simon Davis Barry was conducted subsequent to attending the fantastic Ghost Wars SDCC panel in 2017, when #TeamWHR was granted the privilege of interviewing the marvelous Mr Barry and Vincent D’Onofrio in the Ghost Wars Press Room.

The Ghost Wars panel was an outstanding event at SDCC 2017 with both actors and series creators in attendance at the panel when they shared details about a great new paranormal alien invasion series now enjoying an exciting premiere season on SYFY!

We here at #TeamWHR have enjoyed the first season of Ghost Wars and are hopeful that the series will be renewed for many more years to come on SYFY in the United States and Netflix around the world!

Please feel free to share this article with your friends, co-workers and or family and leave your comments! We look forward to you visiting our Conventions Corner and Main Blog web sites when we release #TeamWHR’s next exclusive interview seris from SDCC featuring a rising star in Hollywood AND the main cast of 12 Monkeys in 2018!

CyPhaCon's Uprising During Lake Charles Takeover Meant To Be!

Sat Mar 31 , 2018
It’s that time! CyPhaCon is back and the guest list has some favorite faces. I love Louisiana and this little well ran comic con. And, no, it’s not just because it’s near Steamboat Bills! ﻿﻿ CyPhaCon seems so well oiled. If there were any kinks, we didn’t see them. The […] 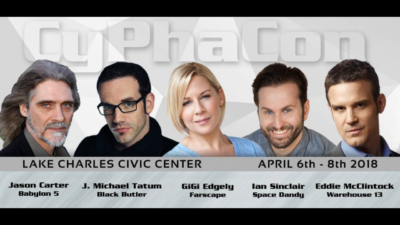