I am back, one again to report on our favorite show! The third season is close at hand and I wanted to finally get my Comic-con post out for all those who were not able to make it this year.

When I entered Ballroom 20 I thought I was late, there was a host of images on the screens flashing before my eyes. Then I looked closer and realized that it was footage from the new spinoff Once Upon A Time in Wonderland. I was relieved that I had not missed any of the OUAT panel.

As the lights came up after the preview, I was anxiously awaiting the arrival of our beloved cast. Then the wait was over, they were here! This was one of the panels I made sure that I was at. I had come to OUAT late in the game, but have since grown to love this unique show. 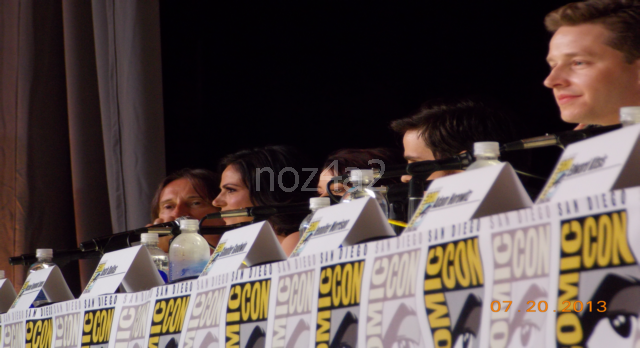 Okay…away we go! Will Keck the senior editor from TV guide magazine was the moderator for this panel and he was just as excited as we were. The first people he introduced were the geniuses behind the show, Edward Kitsis and Adam Horowitz, who received cheers that rivaled that of the cast. It is always great to have the driving forces behind the shows at Comic-con. As a writer/producer myself I know that their unique perspective is always intriguing to listen to and experience. These gentlemen clearly love their work and all the stories they get to weave throughout Storybooke. 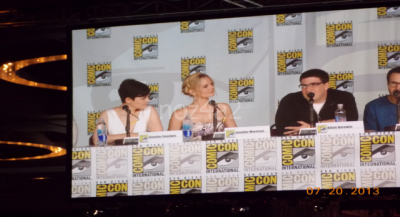 Next to grace the stage was our favorite princess, Snow White played by the fabulous Ginnifer Goodwin, who looked so very lovely. All the ladies looked really beautiful and all the guys were casual except for Josh Dallas who came out in a suit, he is Prince Charming after all. One by one our cast emerged to the adoration of the crowd. Smiles gracing all their faces as they took their rightful place on stage.

I was so glad to see both Colin O’Donoghue and Michael Raymond-James at their very first Comic-con appearance and to hear the loudest screams for Hook! All the women that sat next to me were swooning over Colin and that Irish brogue. There is something dangerous about falling in love with a pirate. 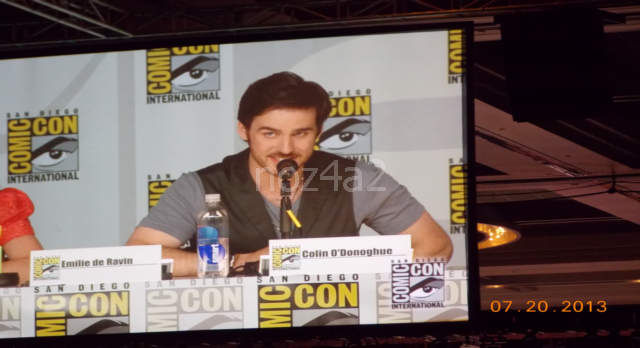 I was very excited to see my favorite cast of characters on stage and hear the love from the audience that emanated throughout the ballroom. It is always great to be a part of panels, especially when it is a show that is so dearly (or should I saw dearie) loved.

Will’s first question was about how the clan has been coping with the journey to Neverland to find a missing Henry (played by the adorable Jared Gilmore) Josh’s answer, it has been wet…that’s a prince for you. The producers have a new format for this season, they are going to run 11 episodes in a row uninterrupted and then the same for the spring. That should hopefully hold all of us Oncers satisfied until the New Year. It will be hard, but thank goodness for repeats, dvr and on-demand.

It was nice to hear Michael talk about Baelfire and his journey of discovery. It is also great, because Michael is a character himself, such a funny, charming, smart guy. I have been a fan of his ever since I saw him on True Blood. He has a great body of work and the chops to prove it having studied at the famous Lee Strasberg Theatre Institute…no wonder I liked this guy.

Ginny Goodwin talked about how as much loss as Snow experienced in Season 2 that she is always at either end of the spectrum. As with all characters that are inherently good there has to be a balance otherwise it just seems false. Especially in her relationship to Regina (Lana Parrilla) and the conflict that has been running through their story since the very beginning. 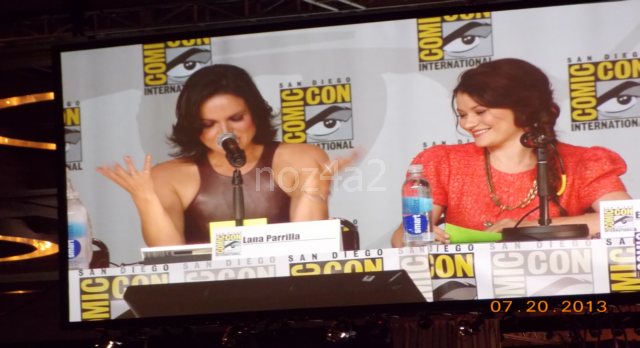 A BIG reveal (sort of) was when asked what her favorite kill was Lana answered, it’s coming up in Season 3, to which the crowd reacted with oohs and ahhhs. That is something I know I am looking forward to. Of course the question on everyone’s mind is who could it be? Regina has so many enemies and very few allies that it will be tough to figure out who gets their heart ripped out, or worse.

The excitement of heading to Neverland was one thing that was on everyone’s mind. Meeting Peter Pan and the Darlings and all the other riff raff associated with Neverland and the characters we have all grown up on. The difference in this version of Neverland is that Peter’s character is not quite what we remembered from the J.M. Barrie book we know and love. There seems to be a darker somewhat complicated past to him and one that I am really looking forward to seeing unfold. 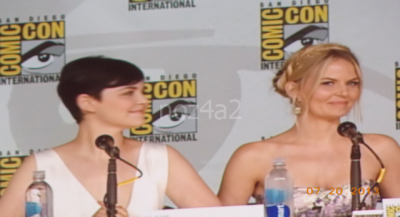 This season there are a couple of additions to the cast, one being Tinker bell and the other a Mermaid by the name of Ariel (Joanna Garcia Swisher). There could be no Neverland without Tinker bell and from what the producers say, she is quite the spectacle, not what you would expect. “It’s taking the iconic and putting our spin on it” as Adam Horowitz says when asked about how Tink will look. She also apparently has a surprising connection to one of the characters…I am getting mo 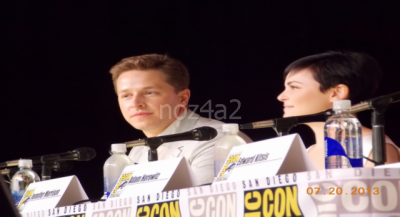 re excited as I hear more about it.

One thing I love about this show is that there is a different spin on traditional fairy tales. There are different worlds that collide and characters that would normally never come in contact with each other intermingle like it was a normal occurrence. I usually am very particular when it comes to things like messing with a story that an author wrote, but they did such a great job that you can’t help but love it. Plus it also reminds me of how life can give you second chances and how you need to embrace them. There are life lessons that can be learned from this show and that is one reason I love it.

Colin was asked if there was any Johnny Depp influenced in his version of Hook and he said not so much that as Westley from The Princess Bride (one of my favorite movies). I can totally see how that influence in Colin’s portrayal of Hook. The Hook/Rumple battle was touched on about how they worked together and Robert Carlyle loved it. He said they already have a Celtic connection that he is from Scotland and Colin from Ireland, so that helped. 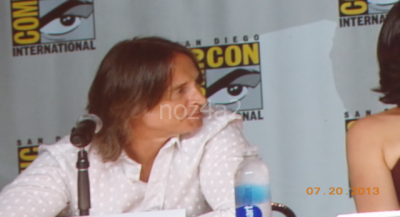 With a show as heavily CGI as OUAT is the actors often find themselves acting to green screen, which can be difficult. Jennifer Morrison (Emma Swan) had talked about how she was in a giant inner tube that doubled as the Giant’s finger and how she had to bite it over and over which resulted in a bruised lip…ouch. She was a trooper about it, after all she is the daughter of Snow and Charming.
The rest of the panel tried not to reveal too much about the upcoming season, they made sure to choose their words very carefully, but gave us enough of a taste to satisfy our growing curiosity.

The highlight for me was when Jennifer, Lana, Emilie and Colin read favorite lines from the past season as requested from fans on twitter. Of course the best one hands down was from Colin, his line having a bit of innuendo “If I jab you with my sword you will feel it” at which cat calls could be heard from the ladies in the audience.

As the panel wound down towards the end, questions from the audience were asked and the producers gave us one last glimpse of what’s to come for our beloved cast in the new and mysterious world of Neverland. There are some romances that will be blossoming, some that will be fought for and hopefully won and some that will be torn apart, only time will tell. Thanks to all the OUAT fans out there and don’t forget to tune in on Sunday September 29th to see the journey to Neverland begin.

I hope you enjoyed my Black Sails report from San Diego Comic-Con 2013 and I thank you for visiting WormholeRiders News Agency. And thanks to Kenn for video embedding and additional images for my report. I will be back soon with more on SDCC 2013!

One thought on “Comic-Con: Once Upon A Time Panel – From Storybrooke to Neverland, Let the Journey Begin!”

Sat Oct 5 , 2013
My fellow Defiance fans! I hope that you made it down to Comic-Con 2013 this year! If not, I am here to give you a taste of what their very first panel was like. I am hoping that this year will be the first of many years to come for […] 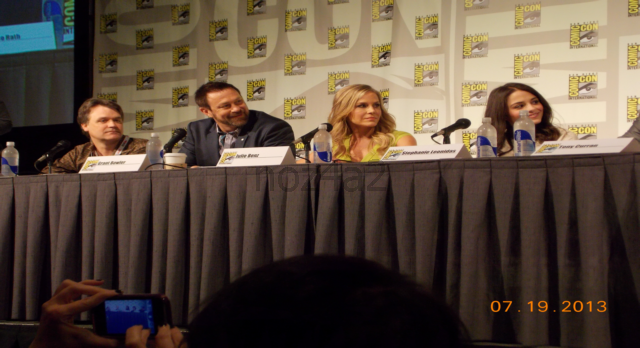