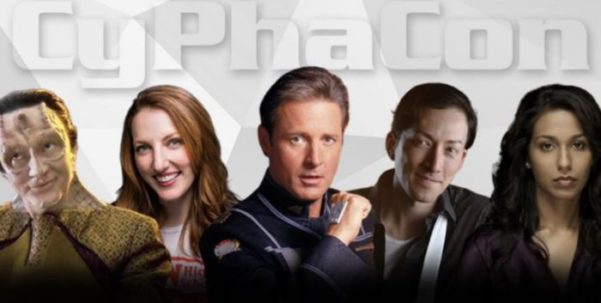 Wow, CyPhaCon was back and better than ever this year at the Lake Charles Civic Center in Lake Charles, LA!

This has been a fave little comic con of mine for several years now.  We’d love to see them continue to grow in the coming years and can’t wait to see what they have in store for their 10 year anniversary next year! 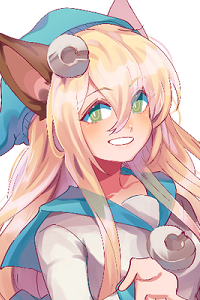 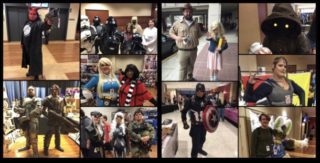 Friday’s opening to enter the vendor’s area seemed to be delayed by roughly 30 minutes but, other than that, it was a great 1st day. In looking around and taking in all the vendors, there appeared to  be more people in attendance on Friday than from the previous 2 years.  And along with that, more people in cosplay gear. I loved it! 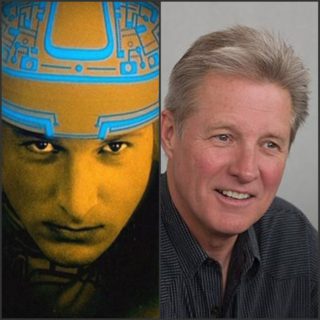 Bruce Boxleitner was simply amazing.  His career spans through multiple generations.  My dad was a huge fan of westerns and Louis L’Amour.  I loved Tron and Scarecrow and Mrs. King. (He told us that the cast didn’t know about Kate Jackson‘s breast cancer at that time.)

My son was pleased to learn that Boxleitner has a little Kingdom Hearts voice work under his credits.  (Boxleitner mentioned this was the one things his own kid was excited about.)  And FYI, it was extremely interesting to talk to him about current events. 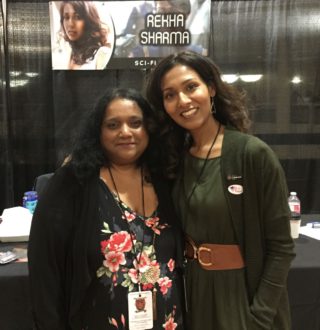 Team Wormhole Riders was also very glad to finally meet Rekha Sharma.  We’d missed meeting her at a previously covered convention due to scheduling conflicts.  She’s had many roles in some of my personal faves; Lost, Battlestar Galactica, V Series, The 100, & Star Trek Continues.  Her panel was tops this year.

Rekha is a funny, openly honest, answering our own staff photographer’s, Shireen Shyamala, question on her family’s thoughts on Sharma’s career path.  It was amazing to hear how her family supported her and they’re open dialogue relationship.  Ms. Sharma also started #whathappensatcyphaconstaysatcyphacon during her Q&A panel. You can’t ask why because we can’t tell.. 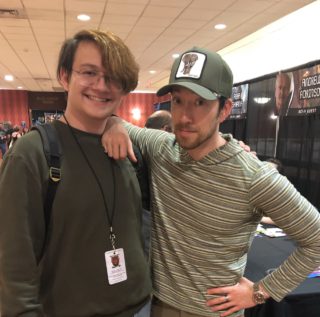 Another unexpected treat was Todd Haberkorn..  Okay, we KNEW he was going to be there.  But until I did my research, I had NO idea how hard this guy works!  You should check out his IMDb..he’s a force!  I know of him via Star Trek Continues (Mr. Spock).

My niece’s know of him from Ouran High School Host Club, and Attack on Titan, along with MANY other popular Anime.  But the best part was my son’s reaction when he got to meet ‘The Drifter’ from the video game, Destiny 2: Forsaken.

I was given permission by Haberkorn to record something Ian wanted to say to him.  It was so freaking cool to watch Haberkorn switch into character!  He was so amazingly generous with his time with his fans.  Huge love for that! 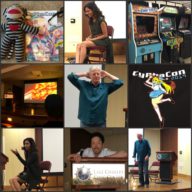 Per usual, I always highly recommend taking in at least a panel or two when you attend a comic con.  Always nice to get to meet some of your favorite guests and see their sense of humors.  You’d be pleasantly surprised. 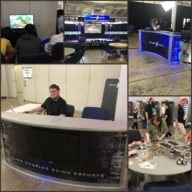 Something new for us this year:  While Shireen and I went about getting photos and meeting cosplayers, fan groups, and attending panels, Ian actually entered the Smash Bros video game tournament!

We saw young & old combined ready to play.  Sadly, Ian took a beating but thoroughly enjoyed it.  Next year he’d like to try the Overwatch tournament if CyPhaCon & Scion Esports hosts another. 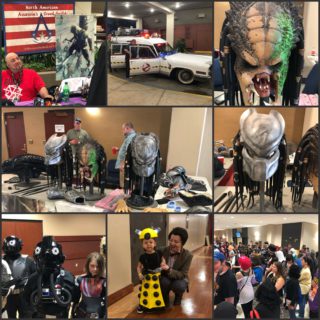 Wormhole Riders News Agency staff had a great time, but one thing I was totally disappointed that I missed was the some Alien VS Predator cosplay action!

The fan group would be in full gear on Saturday, but somehow I managed to miss it.  Bummed, but I hope to catch them in the future. 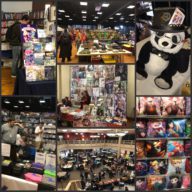 And I can’t end without giving a MAJOR shout out to Garrett Manuel and the rest of the CyPhaCon crew.  They and their volunteers worked their acres off.

Other than the tiny vendor entry delay opening day, and a slight hitch Saturday morning with credit card/ticket purchases, I heard no other complaints.  It’s always so awesome to watch these guys do their thing, and we are grateful for the opportunity to be a tiny part of it!

Thanks so much for having us back this year and can’t wait to see you guys next year!

Thank you for visiting Wormhole Riders News Agency.  And thanks to Kenn of #TeamWHR for video embedding and additional images for my report.  I hope to be back in the near future for more convention adventures!

Please feel free to leave a comment here, share this news article, or you can chat by visiting and following me on Twitter by clicking on my avatar to the right.

One thought on “CyPhaCon 2019: The Discovery Continues and We Got Boxleitner Too! #whathappensatcyphaconstaysatcyphacon”

Sat Aug 10 , 2019
Welcome back WormholeRiders Van Helsing Lovers! This is #TeamWHR’s ongoing series of feature articles to support one of our favorite high quality science fiction series on SYFY. Delightfully named Van Helsing, based on the Dracula legend, the cast and creators returned to SDCC50 to conduct a fantastic, friendly, family like […] 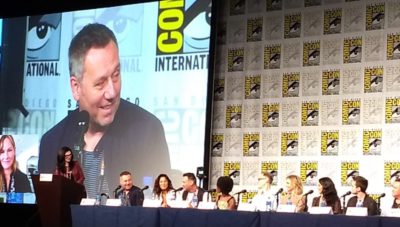