3D content endured a number of hits from the audience, media, and creative practitioners since 2010’s 3D Entertainment Summit, but the business intelligence of 2011 suggests 3D uptake is performing at least as well as other entertainment technologies (Blu-Ray discs, DVDs, High-definition digital film, etc) in its ‘sophomore’ year. Consumer interest is up, intent to buy is very acceptable, and artists and technicians are getting on the same page in order to develop new and innovative experiences in 3D. 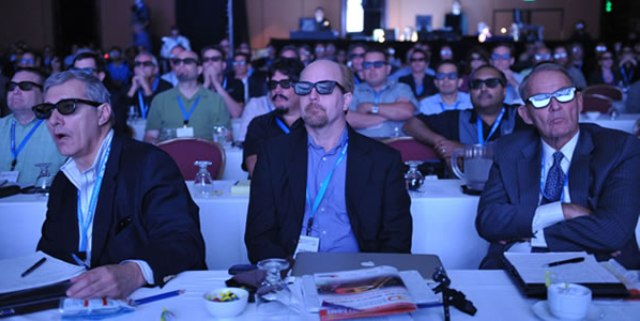 The driving trend across panels then, was that the audience has no interest in unsatisfying 3D experiences but that they seem quite responsive to quality 3D. Academy Award winner (and perhaps legitimate King of the entertainment World) James Cameron spoke most deeply about the use of 3D at the conference and of pushing the boundary of what 3D can do.

Gone are the days where stereographers sit back and tsks-tsks the camera set-up, James Cameron said, and tells the director why their shots won’t

work for breaking the Rule-of-30 or because objects are hanging off the edges, etc. Stereographers need to push themselves creatively to think of new ways to achieve the vision that is being driven.

The director shared the stage with his longtime collaborator – and near equally famous partner in the 3D world – Vincent Pace, and the head of the 3D Entertainment Summit, Bob Dowling. 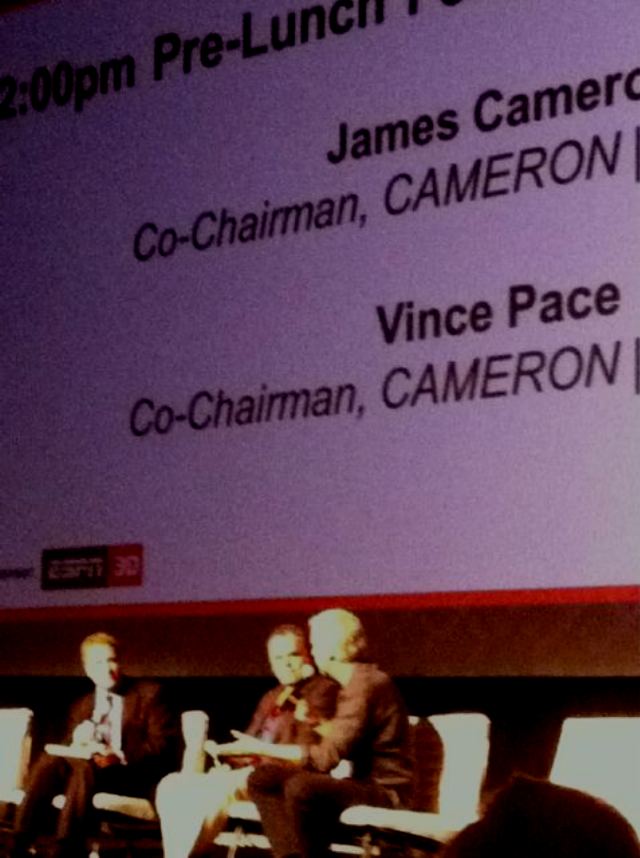 Outside of the keynote speaker, the work and insight presented at the Summit dovetails into three categories richly captured by one presenter in the overlapping circles of a Venn Diagram. They are: technology, content, and distribution. The Summit even devoted a panel section to precisely this “chicken and egg” topic.

The potentially downward spiral goes like this: first, since there is a relative lack of 3D content (compared to 3D), then why would consumers bother to invest in 3D TVs? And, if consumers only own a limited number 3D TVs, why would distributors invest in creating expensive distribution channels? Lastly, if there only limited means of distribution, why would creators invest in creating quality content? Taken as a whole, the 3D Entertainment Summit had the following responses to those questions.

Indeed it’s true, only limited amounts of 3D content exist in the world at this moment in time. Charlotte Jones and Helen Davis Jayalath from media research firm IHS Screen Digest even indicate that the number of studio films slated for release in 2012 is at present a little bit less than 2011. However, Hollywood is not everything and they also pointed out that the overall global production of 3D material has risen dramatically. 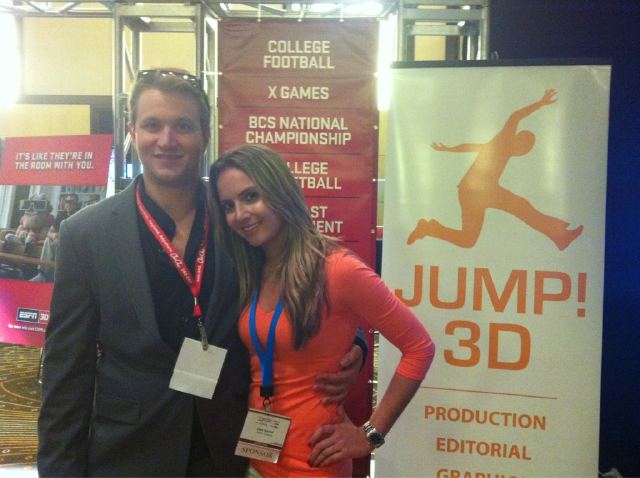 “It is important to remember that the appetite for 3D is significantly greater outside the US then it is inside,” said a Wall-Street investment analyst on a later panel. In total then, production of 3D entertainment shows large growth in the course of the last year. Beyond narrative entertainment, Bryan Burns, VP of Strategic Business Planning at ESPN, told the audience that the media outlets ran a web’s worth of stories about how ESPN 3D was soon going to close it’s doors. “Three days later, we announced adding Monday Night Football to our slate of 3D content.”

Professionals on the Mobile 3D panel also expressed that the single biggest driver of 3D content on the web and smart phones is, surprisingly, user-generated content. In addition to all these, the 3D content that seems most ready to inflate the 3D library in hurry is the conversion of classic 2D films in 3D. The potential for success with this model was illustrated quite clearly with Disney’s conversion release of the Lion King, which took in just under $30 million at the most recent box office (a ridiculous number for a September release). 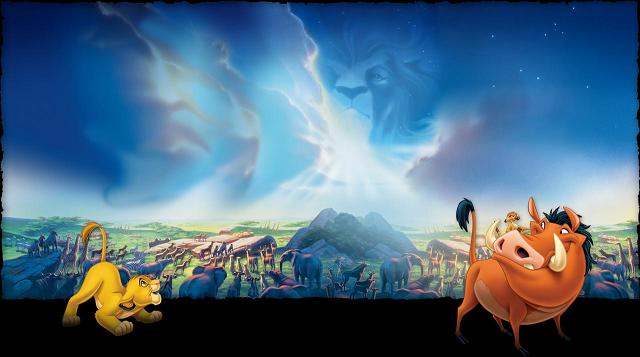 Cameron also mentioned the conversion of Titanic (at a cost of 18 million) and of course George Lucas has already said he will convert Star Wars. In addition, panelist Buzz Hayes, Executive Stereoscopic Producer at Sony, showed powerful clips of Sony’s upcoming 3D WWII documentary that is a combination of stereoscopically shot video and converted found footage. Therefore, while the most prominent player, Hollywood, appears to have taken a conservative stance toward 3D ramp up, the open field of opportunity in the 3D market is driving large numbers of content makers to produce and deliver in 3D. 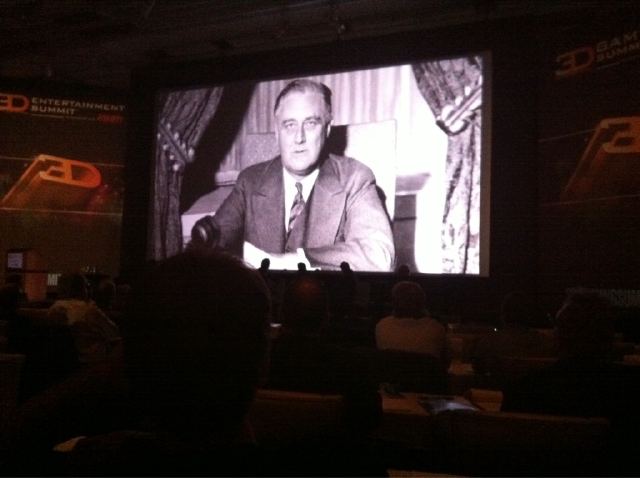 Marketing research presented at the Summit revealed an interesting surprise: in the push to brand 3D televisions as a new type of experience, the consumer became confused to the point that the consumer believed they were making a decision between buying a 3DTV or an HDTV. They did not understand that 3DTVs are themselves HD televisions that can be watched in crisp, high-resolution 2D. 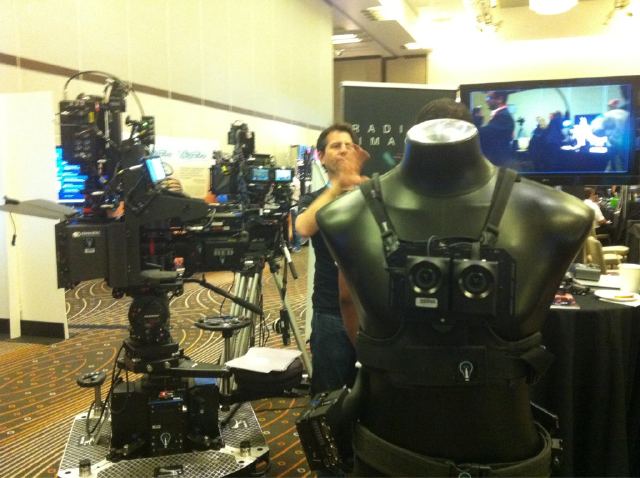 Panelists remarked that both the marketing literature and the on-the-ground salespersons’ dialogue will be redefined to frame the new line of sets as ‘high-end HDTVs that also provide 3D when you want it.’ Even with these issues, John Revie, SVP of Samsung Home Entertainment, said by years end 3 million units of 3DTVs will have been sold. 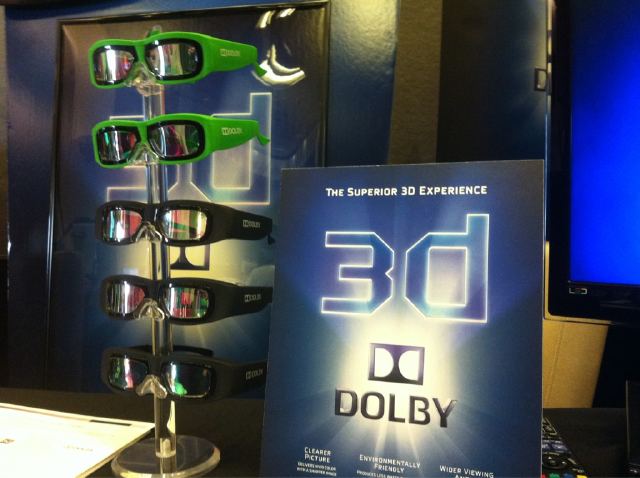 While a ‘battle’ remains over active vs passive glasses, the major success is that a system of standards were passed among active glasses makers which means any user buying any active system can bring their active glasses to any other active system and receive the same quality 3D. In addition to the active vs passive glasses, the constant question of course, “will they ever go away?” Tech predictions remained at the 5-10 year range before autostereoscopic commercial displays will be good enough for average consumers even with the recent buzz about Samsung’s possible autostereoscopic field-study success.

Screen Digests analysts show the increase in 3D digital screens has grown from under 10% in the beginning of 2009 to nearly a third of all theaters at the end of 2011. They also reported that the number of global television channels jumped from under five in 2009, to over 35 by the end of 2011. The number of mobile screens and computer monitors capable of projecting 3D both also increased. Another tidbit that need be noted is that global box-office for 3D films – in a year where the perception seems to be down on 3D – more than doubled to 6.1 billion dollars last year. 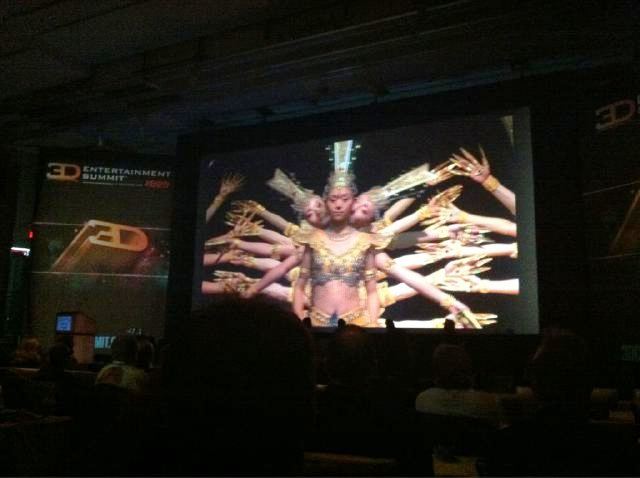 In the end though, some of the best points made about the future of 3D weren’t so rational and weren’t so steeped in data. The commitment of artists like Martin Scorsese, Stephen Spielberg, Ang Lee, and Baz Luhrman to big-budget 3D projects seemed to be quite an argument in favor of more 3D. The clips shown on screen by panelists weren’t dim, didn’t hurt, and weren’t fuzzy. 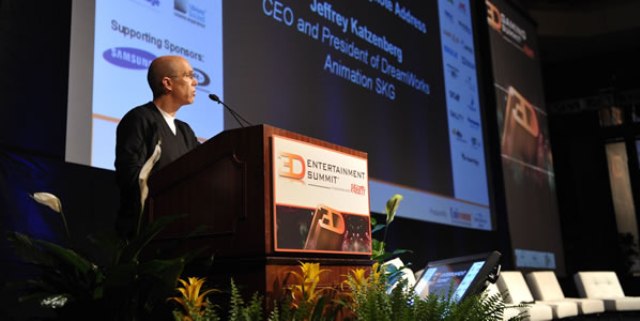 The camera-rigs displayed by Radiant Images showed attention to the needs of artists from technicians. And the most interesting non-data driven point about the value of 3D experiences was a random comment by the keynote speaker, James Cameron. He didn’t mention statistics and he didn’t make any kind of argument. He simply asked, “Look, I could shoot AVATAR 2 in 2D on Black & White film on a 16mm camera… Is that what you think I should do?” 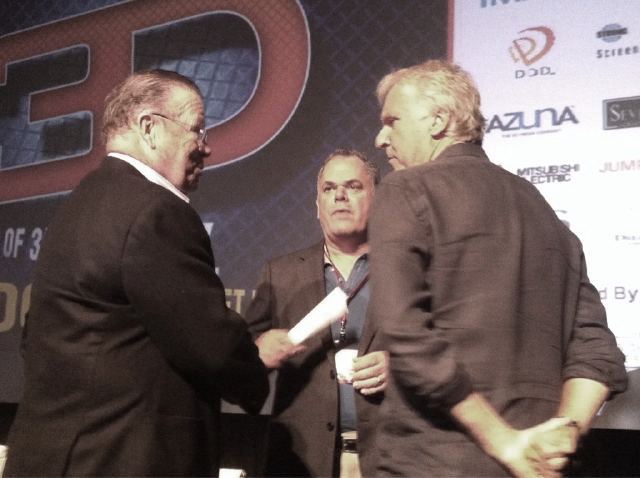 Thanks to Kenn for staging my report and thanks to you for reading and visiting Convention Corners at WormholeRiders News Agency.

As my first news article for WHR I would appreciate if you could leave a comment here or if you prefer, click the social media icons below to share this news article. 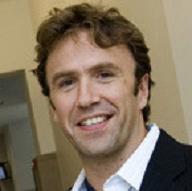 3 thoughts on “3D Entertainment Summit 2011 Confronts Reality – AND IS NOT AFRAID!”

Once Upon A Cure: A Sci-Fi Fan's Journey Through The Looking Glass

Sat Oct 8 , 2011
Hello fans of charity who also love a dose of fantasy and science fiction! When the Once Upon A Cure event was announced in May, I had already been looking for a place to spend an extended weekend trip. This was the opportunity I was looking for. That dream weekend […]