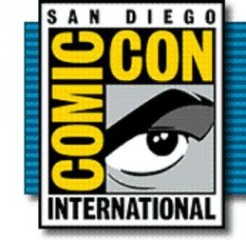 On Friday July 13, 2012, during the festivities at Comic-Con San Diego, and with courtesy of Turner Network Television and Dreamworks Studios, we had the privilege of attending the Falling Skies Press Room where the excitement was beyond a fever pitch since the announcement of a third season renewal a few days earlier!

Based upon world-wide distribution, Falling Skies is without a doubt the world’s number one science fiction series since production began two years ago, and it glowed during the  Falling Skies Press Room! 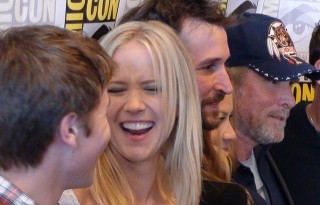 Excitement, in fact outright glee flowed freely among both the cast, the creators and the media. All were quite pleasantly edified by the huge media draw versus Comic-Con 2011 before the series had swept across the world to widespread fan acceptance.

The “buzz” in the press room was palpable. While waiting for the special guests to arrive, the conversation among press contemporaries was lively as we too celebrated a science fiction series, once doubted by some of the critics, that had deservedly “made it”, a success in the highly competitive television programming industry! 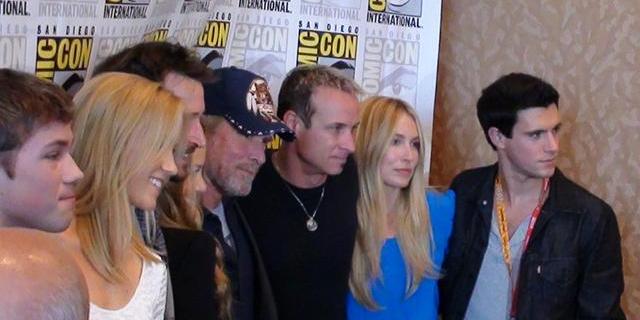 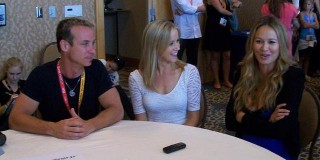 When the cast members arrived, there was an audible cheer that erupted across the room as they lined up for a group cast photo opportunities!

In fact, this press observer and everyone in attendance were delighted with Falling Skies accomplishment of maintaining high ratings, not an easy task in today’s entertainment market for a full fledged alien invasion, science fiction television series.

All of these factors and more made this media event a highly sought after press room opportunity in 2012 as you can observe below in our exclusive video. 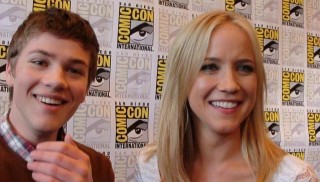 Conservative estimates placed the media presence at three to four times larger in terms of people in the room. With many extra video camera crew’s, each packing high definition equipment, and more photographers packed into the press room than 2011, everyone was all “a Twitter” (literally) at the conclave. 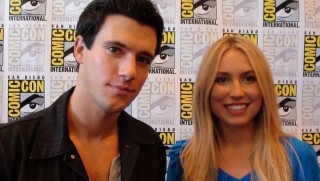 The excitement at this years Falling Skies Press Room event was further amplified by the fact that more than twice as many media outlets from around the world were all ready and waiting eagerly for interviews with the cast members, each of whom were in extremely jovial spirits themselves having heard of the wonderful third season renewal news only recently. 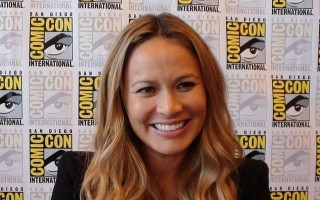 The cast members talked about celebrating after their panel and how happy they were over the renewal. It was a pleasure to see their pride of ownership over a successful and well received science fiction entertainment product.

Now that tens of millions world wide have become Falling Skies believers, the creators were prescient in thinking ahead by increasing the number of celebrities in attendance at this years Comic-Con geek convention in San Diego. 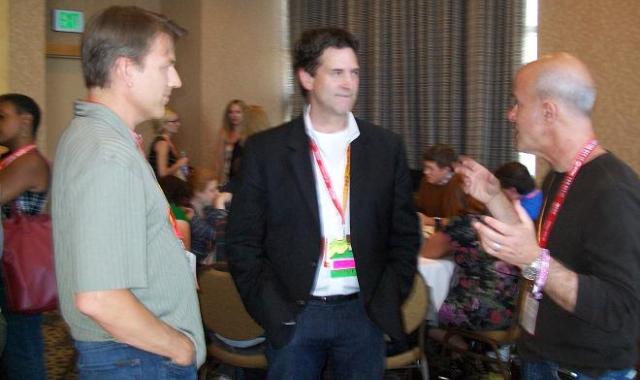 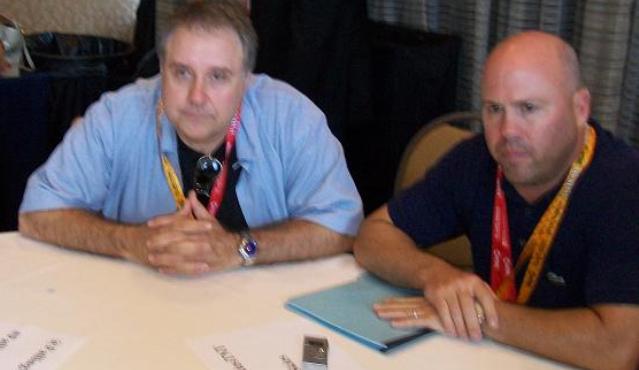 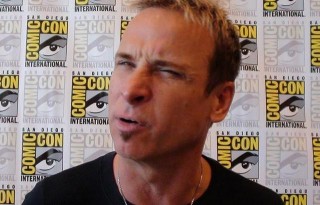 Also in attendance, coming in after the press room session ended, was science fiction legend and superstar in his own right, the one and only Wil Wheaton!

Falling Skies 2012 panel moderator at Comic-Con, Wil is well known as host of 2nd Watch, the runaway hit web “after show” that airs each week live on the Internet! Wil mentioned that he loves doing 2nd Watch and is a big fan of the series himself! It was nice to chat with Mr. Wheaton and to see him in person once again. 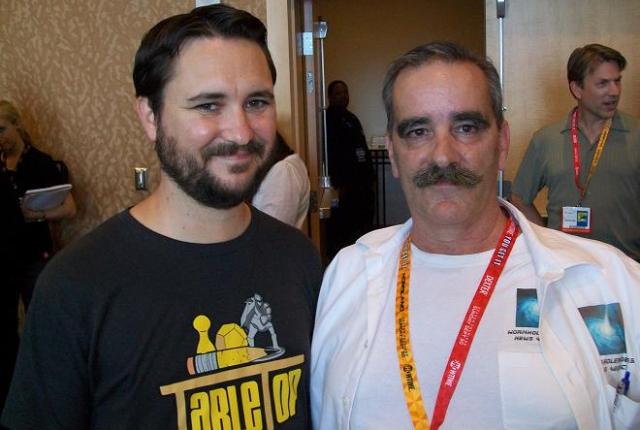 As I left the Falling Skies Press Room event with happy thoughts, I did something many journalists and celebrities alike seek when attending San Diego Comic-Con;

A quiet place to be away from the throng of humanity for a few minutes before the next assignment, panel or event squarely presented itself.

I sought out a little known area of the hotel with a view of San Diego Bay. As I turned the corner, there was Noah Wyle and Will Patton with their female companions seeking the same thing; 15 minutes of relaxation before the long walk to the next event. 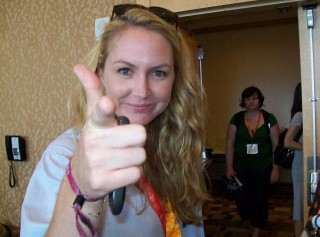 Not wanting to intrude, I asked if it was okay to join them. Truth be told, I asked them how in the devil had they found my secret spot!? (Just kidding).

Noah motioned in a friendly fashion to join them, stating he “remembered meeting me last year”. Will Patton also looked up with a recognizing nod and smile. This was to be one of the special moments at a convention when the pressure of the event was off and we could chat freely.

I remembered them fondly from our interviews with Will and Noah last year during Comic-Con 2011 San Diego. This year however, with the success that brings more media attention, time had run out before interviewing them in the 2012 Falling Skies Press Room.

Keeping the cameras off out of reverence for the chance encounter, I enjoyed about 12 minutes of private time (compared to the gleeful bustle of the press room) chatting with Noah Wyle. I asked how he felt about his accomplishment as a producer of Falling Skies. From a business perspective he related that he was proud of what had been accomplished.

We also discussed the change in production locations to Vancouver British Columbia. Noah said he “was happy with everything that the move went very well in Vancouver, and was looking forward to shooting season three there”.

As we parted company, Will Patton remembered that I had asked him if he would be marrying Hal and Maggie in the future. He briefly went into character indicating he was going to “keep an eye on Maggie and Hal pending further developments”. As I wished them well, and thanked them for their time, Noah Wyle was gracious enough to do a spur of the moment photo opportunity, which I will think of fondly for a long time. 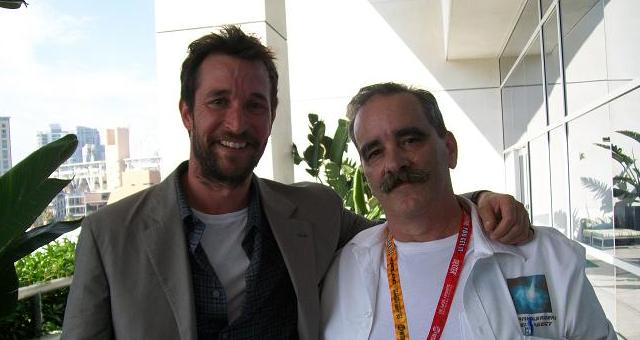 Thank you for reading, watching and visiting WormholeRiders News Agency.

Or as many of our readers and visitors often do, visit WHR on Twitter, WHR on Facebook or visit me on Twitter by clicking the text links or images avatars in this news story. Team WHR and I look forward to Seeing You on The Other Side“!

Wed Jul 25 , 2012
Hey Convention Goers, While we were at Comic-Con, we had the chance to sit down with production designer and director extraordinaire Greg Aronowitz. Though you may not recognize his name, you are sure to know his work if you’ve been watching television, films, or webseries over the last 25 years. […] 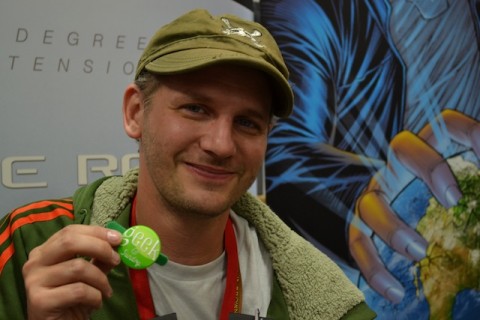