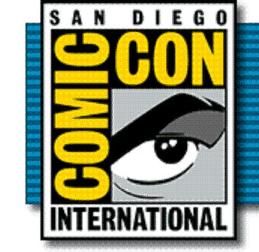 During our journey this year to and through Comic-Con 2012 in San Diego, I was honored to be present during the “Red Carpet” and premiere for a great new film to be released this year, “Bad Kids Go To Hell”. 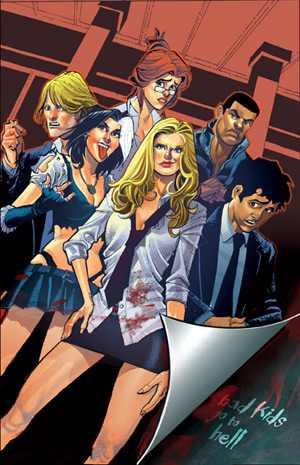 As well as viewing the full length screening of this fun film, attending the after party where many of the films celebrities were in attendance, also stopping by the Bad Kids Go To Hell booth Saturday in the great vendors hall at Comic-Con.

Included below are exclusive video features split into three parts; The post screening question and answer session, the Red Carpet meet and greet prior to the premiere, and at this reviews conclusion, the “Bad Kids Go To Hell” after party where everyone had a wonderful time!

Prior to leaving for San Diego I pledged to have at least one evening related to work that would include extra fun and a bit of relaxation. Thanks to a reminder heads up from SciFi Talk’s terrific Tony Telado at a previous SDCC press event, on Friday evening July 13, 2012, WormholeRiders news team was bestowed a special privilege of learning more about the fabulous “Bad Kids Go To Hell” by viewing the premiere!

Tony had related that he has been following the progress of “Bad Kids Go To Hell” since its inception as the graphic novel which went on to become what has now manifest as the movie, with a sequel already in the works. Based on the screenplay written by Barry “Bazz” Wernick and Matthew Spradlin (who also directed this entertaining motion picture production), the premiere fulfilled my every expectation.

“Bad Kids Go To Hell” is described by the creators as follows; ”On a stormy Saturday afternoon, six students from Crestview Academy begin to meet horrible fates as they serve out their detentions. Is a fellow student to blame, or perhaps Crestview’s alleged ghosts are behind the terrible acts?” 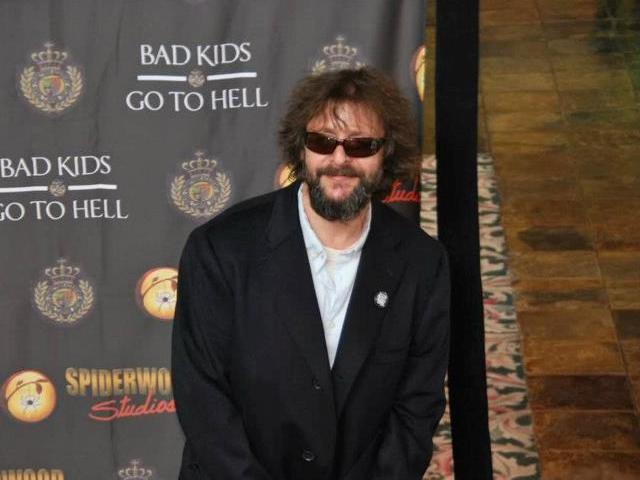 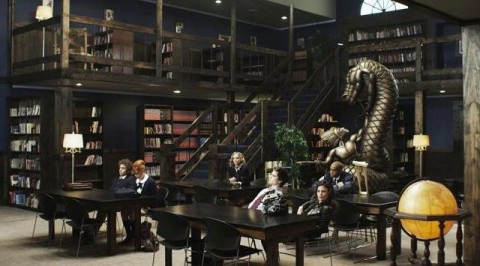 To begin, this reviewer gives this film an “A” for entertainment value for the following reasons; comedy, screenwriting, editing, cinematography, music score composition, and wonderful acting by not only Browder and Nelson, but the entire ensemble cast. Bravo!

I became intrigued when I learned that “Bad Kids Go To Hell” features television and movie legends Ben Browder (Stargate, Farscape, Doctor Who) who delightfully portrays the enigmatic “Max” the janitor, Judd Nelson (The Breakfast Club, Psych, Phineas and Ferb) who does a great job as “Headmaster Nash”, Mark Donato (Degrassi: The Next Generation, Flash Forward) as the misunderstood character Tariq, and Ali Faulkner (Twilight Breaking Dawn) as Tricia. 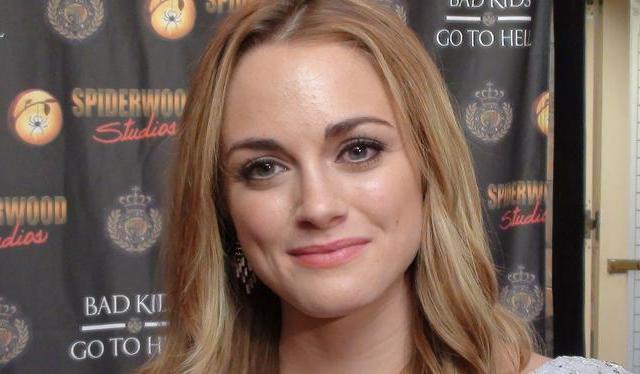 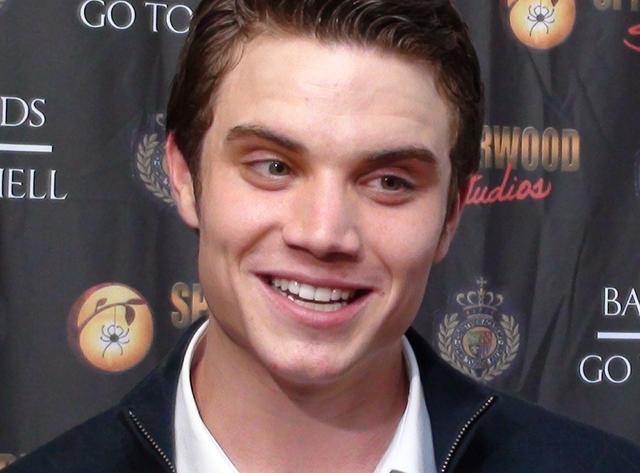 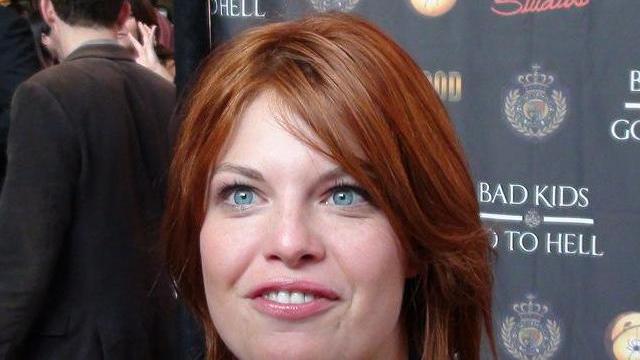 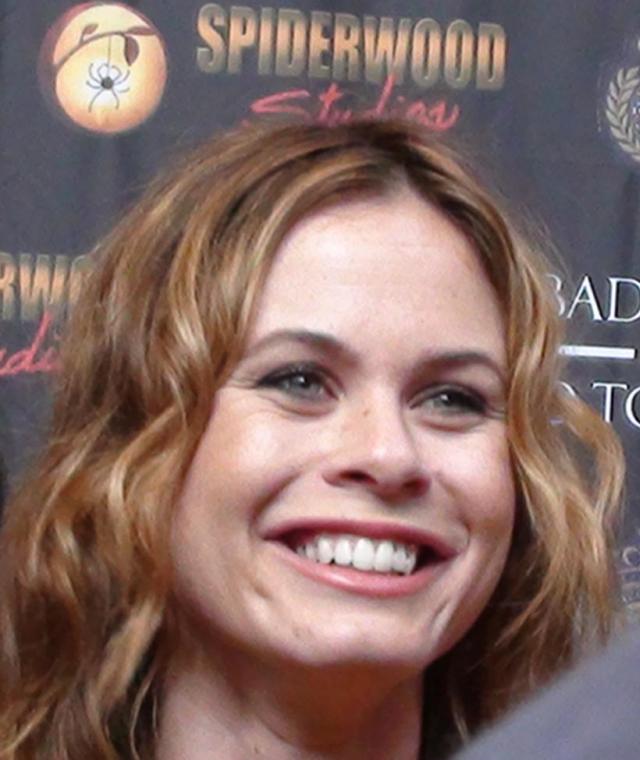 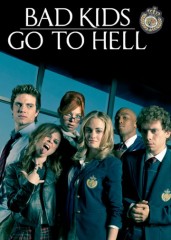 Each of these superb actors delivers wonderful performances that make the film the fine product that it is.

While the noted actors are the “anchors” of “Bad Kids Go To Hell”, both the well known actors, actresses, supporting celebrities, the newcomers and superb designed costumes by Alyssa Wernick are part of what makes the film so enjoyable. 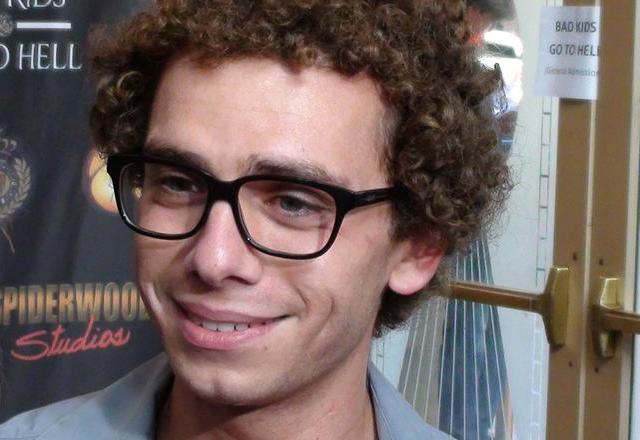 This reviewer observed that the premiere had the audience howling and clapping with sheer glee! Subsequent to the premiere, the films producers conducted a well received, in fact quite revealing question and answer session featuring “Bad Kids Go To Hell” creator Barry “Bazz” Wernick included below for your enjoyment and enlightenment. 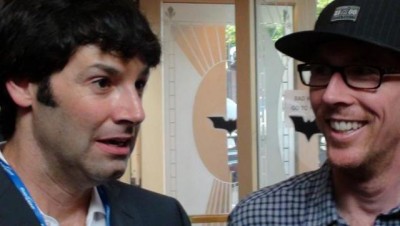 I was fortunate enough to obtain a new copy of the 2010 release of the “Bad Kids Go To Hell” graphic novel (cover art pictured above) at a premiere after party held after the San Diego Comic-Con premiere.

The graphic novel is quite enjoyable in and of itself. The adaptation to the movie, including several “over the top” sequences retained for visual effect dovetail the graphic novel rather nicely in the opinion of this reviewer.

Some critics have been a bit harsh with one noting; “there are times in the book where the lettering is a little awkward”. I must disagree. The comic or graphic novel is just that, a comic designed to entertain.

Nevertheless, the movie version should address such criticism. This reviewer found the movies dialog both easy to understand and internalize replete with loads of fun as the story eloquently unfolds on the screen. Also fun was the Red Carpet meet and greet which we include below. Enjoy! 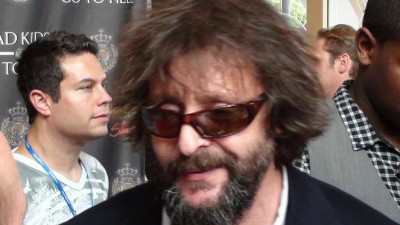 Viewers should consider “Bad Kids Go To Hell” as an homage to “The Breakfast Club” due to the casting of Judd Nelson as Headmaster Nash and the references to an Indian “ghost” which apparently haunts “Crestview Academy”.

This reviewer found the characterized movie version of the hit original comic series as a tribute to various horror films such as the long lived “Halloween” series, “The Grudge” or the “Nightmare on Elm Street” series for the evil spirits that appear to reside within the detention library where the majority of the movies action takes place. 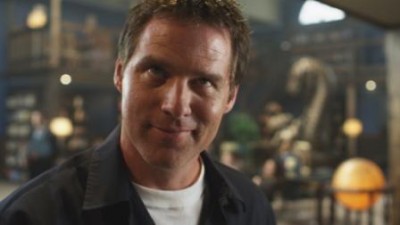 The dark comedy action thriller is a classic series of movies in the making. This reviewer observed during the film that some feel compelled to compare “Bad Kids Go To Hell” to the “The Shining” (1980), “Poltergeist” (1982) or “What Lies Beneath” (2000).

These comparisons go only so far as the evil spirit or ghost that obviously inhabits the exclusive and upscale “Crestview Academy” pictured below. The “Max” character delightfully portrayed by Ben Browder as the schools janitor, adds a distinct flavor which sets “Back Kids Go To Hell” apart from the aforementioned horror genre films of the past. 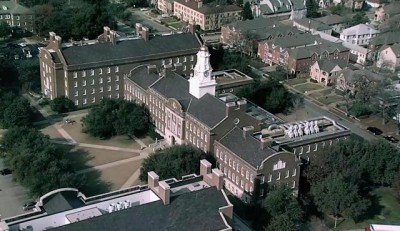 Rather, this reviewer finds that “Bad Kids Go To Hell” is an outstanding original motion picture production faithfully based on the comic recently released in February 2010 as a wonderfully enchanting graphic novel.

After years of calls from the fans of the comic who demanded the graphic novel either become a television series or a movie, Bad Kids Go To Hell has become reality coming to a big screen near you soon pending final distribution arrangements.

The entrance to “Crestview Academy” is where the movie begins. We find the main characters, mostly spoiled brats, are being dropped off for school, some by limo. Our characters are soon confronted by Headmaster Nash for past transgressions that violated the rules at the school earning each an eight hour day of detention in the schools library. Using a series of flashbacks after the malcontent students are escorted to the library, we learn what act each student committed to deserve detention. 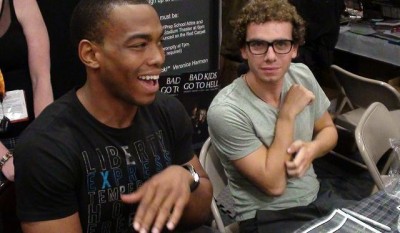 During the segues to the past behavior of the students, each scene is replete with dark comedy humor as each student sarcastically address each other, lurking in the hallways of “Crestview Academy” is “Max”, portrayed by one of my favorite actors, Ben Browder of Stargate SG-1 and Farscape fame.

Throughout the film Max is observed either delivering mumbled speech talking to himself, being lectured about the evil students, or is seen in his workshop tinkering with things. Always with a wry smile on his face, it is clear Max seemingly knows what is ultimately going to to happen to the “Bad Kids” of Crestview Academy.

To this reviewer it appears clear that Max knows many things about Crestview despite his enigmatic often goofy behavior. What viewers of “Bad Kids Go To Hell” must consider is that Max knows secrets about the “Bad Kids Go To Hell” ghost at “Crestview Academy”. Browder delivers a superb performance unlike any other in his long and accomplished career. Well done Ben! We look forward to more Max in the sequel! 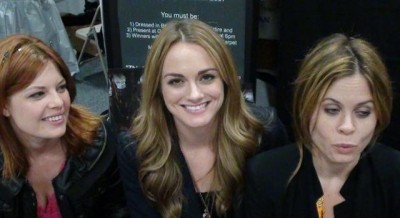 After being introduced to the main and supporting characters, the story arc takes a number of twists and turns with a splash of time honored slasher horror thriller movie sequences. The premise for “Bad Kids Go to Hell” story arc revolves around six troublemaker high school seniors who have to serve a Saturday in the “Crestview Academy” library as detention where all hell breaks loose!

During their time together locked in the library, they each come to believe (are convinced) that they are undoubtedly being haunted by the “Crestview Academy” ghost. During the course of this thrilling adventure in a library five of the students perish one by one. Due to the graphic nature of the deaths of the students and brief nudity, this film is suggested for mature adults, not children despite its comic book origins. 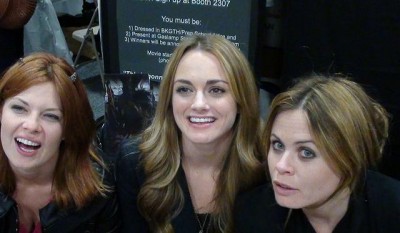 “Bad Kids Go to Hell” is inherently a cult classic. The artwork from the graphic novel by talented Anthony Vargas and Chris Allen was recreated in the painstaking detail at Spiderwood Studios with great skill making the film a true professionally produced production. The masterpiece is the “Crestview Academy” library that is a perfect adaptation of the same scenes from the graphic novel that will certainly leave a positive impression on the viewing audience.

To the point, the story arc deals with adult topics including sexual innuendo and adult humor, including a strip tease scene in which the other students revel at. That is until Headmaster Nash gets wind of the wild sex talk and actions at the “party” which is reflected in the characterizations of the main cast members, some of whom have violent behavior associated or interspersed with the sexual activity. 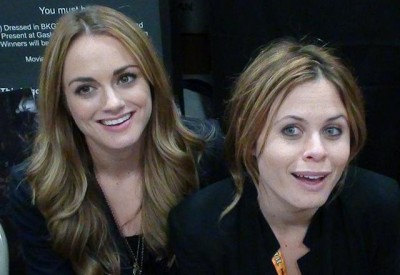 The films sexual talk is not designed for young audiences either in graphic novel or the movie form, but is perfectly suitable for adults. These manifestations are presented at times with great subtly. Other times the sex is “right in your face” artfully creating a sexual tension that exists in real life for students of a high school age.

The sexual and sometimes violent behavior between the students is a tension that manifests itself that works against teamwork to escape the ghost inhabited library. Drug abuse by one student is also addressed that further causes conflict and tension between the students.

While each of the students has an idea or theory with regard to the root the cause of the gruesome slasher type murders, the hostility between the students, each a member of a cliche (rocker, athlete, sexual involvement, and drug use) impedes their ability to address the situation to discover the source of the haunting of Crestview Academy. 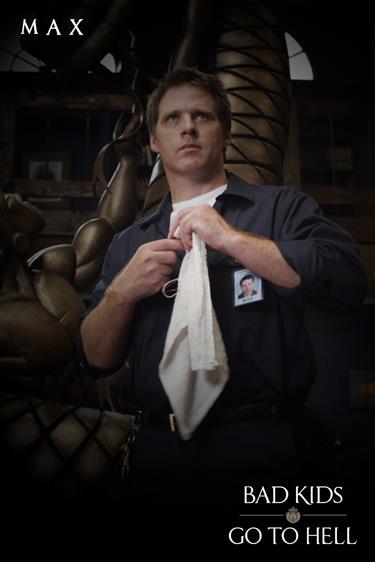 During the process which quickly unfolds scene to scene, the students are able to learn the back story of the library. Unfortunately, the elimination of the students leaves only one of the detainees with the truth. Without spoiling the experience for people who have not read the graphic novel or seen the entire film, the fate of the last person standing is a bit shocking since what he or she knows, is in the opinion of this reviewer, already known by Max the janitor!

Albeit a bit predictable with regard to the ending, Matthew Spradlin’s and Barry “Bazz” Wernick’s story is effective and quite entertaining. The music score faithfully follows the graphic textual references from the graphic novel with excerpts of various songs dating back as far as the 1970’s that were artfully brought to life on the big screen at the Comic-Con premiere.

This reviewer has no negative criticism for “Bad Kids Go to Hell“, only well deserved praise. I enjoyed the film and give it an “A” for entertainment and story arc that draws the viewer delightfully into each scene.

In the meantime enjoy fun “B-Roll” video clips from the “Bad Kids Go To Hell” after party below to get a sample of the enjoyment had by all who attended!

Please feel free to share this review article with your friends, co-workers and or family by clicking one of the icons below. We would also appreciate your comments and look forward to you visiting in the future.

Or as many of our readers and visitors often do, visit WHR on Twitter, or visit me on Twitter by clicking the text links or images avatars in this news story. I and the Team WHR look forward to Seeing You on The Other Side!

Fri Sep 14 , 2012
Sunday morning marked the forth and final day of Toronto Fan Expo, Yet despite it being the final day, that did not prevent thousands of fans from enjoying this amazing convention. After four days, fans were still passionate! Many continued to wear their costumes to the convention, both proud and […]