Here at Wormholeriders News Agency we love science fiction series that investigate the inevitable future of humankind heading out from Earth to explore our solar system, establishing new outposts of life far from our fair planet as a stepping stone to Milky Way galaxy.

In late 2016, science fiction legend writers Marc Scott Zicree and Elaine Zicree who have worked on over one hundred entertainment projects teamed up with revered composer David Raiklen who has over seventy credits to his name to produce Space Command.

Space Command was first envisioned in 2014 when Marc and Elaine established production facilities to produce the series that has come to fantastic fruition in 2019 with the creative series pilot now available for major networks to fully fund!

In the second half of 2018 Team WHR had the honor or interviewing the creators and members of the cast whom were attending San Diego Comic Con. Our interview is included below to coincide with the recent release of the complete pilot episode.

This trio of genius’ began the creation of a new science fiction drama series, bringing together many dozens of talented creators they have worked over the years with to make the pilot of Space Command become reality in 2019.

This new series is set to restore the faith of science fiction aficionados in the bright future of humanity with an exciting story arc that takes place before The Expanse, a superb series that details life in our solar system subsequent to the colonization of Mars and the outer planets.

Writing both individually and as a creative team, Marc and Elaine Zicree with over 100 credits to their name, including series such as Star Trek: The Next Generation, Sliders, Star Trek: Deep Space Nine, Lazarus Man, Beyond Reality, Babylon 5 and myriad other entertainment projects.

Marc and Elain have also created multiple pilots for NBC, ABC and Showtime. Now science fiction fans are ecstatic that the Zicree’s have recently released the complete Space Command pilot episode which we include below for your enjoyment.

Space Command, a dream of science fiction now manifest, is a dramatic Space Opera series that chronicles the adventures of the United Planet’s Space Command, featuring a dedicated group of scientists, soldiers and adventurers exploring the solar system.

The series unfolds in the near future as Space Command chronicles the adventures and dangers associated with space exploration as humankind prepares for travel in the galaxy!

The saga begins with Captain Jack Kemmer (Ethan McDowell) who rescues ex-archeologist Evelyn “Vonn” O’Dara (Mira Furlan) in the atmosphere above Mars. The heroic rescue is the foundation of a human revolution in outer space that portends a transformation of history in the galaxy as we know it today.

Space Command is described by the series creators as follows:

“Space Command recalls the space operas of the golden age of science fiction that enthralled audiences with an optimistic view of future and a belief in the triumphant spirit of mankind.

Seen through the eyes of three families, the Kemmers, the Odaras and the Sekanders, Space Command is about a new beachhead of humanity featuring a hardy team of settlers who head out into the new frontier as the exploration, settlement and development of Mars, the asteroid belt and the outer moons and planets of our solar system.”

We look forward to sharing more about the exciting events that unfolded Friday, Saturday and Sunday at San Diego Comic Con 2018! We hope that you will enjoy TeamWHR’s continuing coverage of this outstanding science fiction, pop culture science based convention we have enjoyed at this outstanding event during the past eleven years!

Sat Jan 19 , 2019
Hello my fellow Mayans M.C. fans! Season 1 may be over, but the anticipation is still very much alive for Season 2! I first heard about Mayans M.C. last year when rumors were circulating that there was a spin-off of the iconic and sacred (to most) Sons of Anarchy. I […] 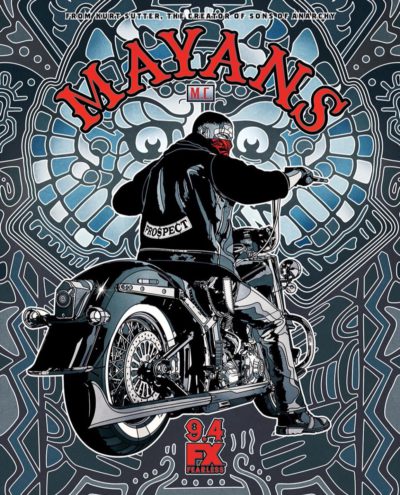