I hope you are having the best time, I know I am.

Every year there seems to be a favorite Comic-Con panel of mine.

A few years ago it was the Key & Peele panel and subsequent press room (in which I made Keegan-Michael Key laugh).

This year it is, hands down has 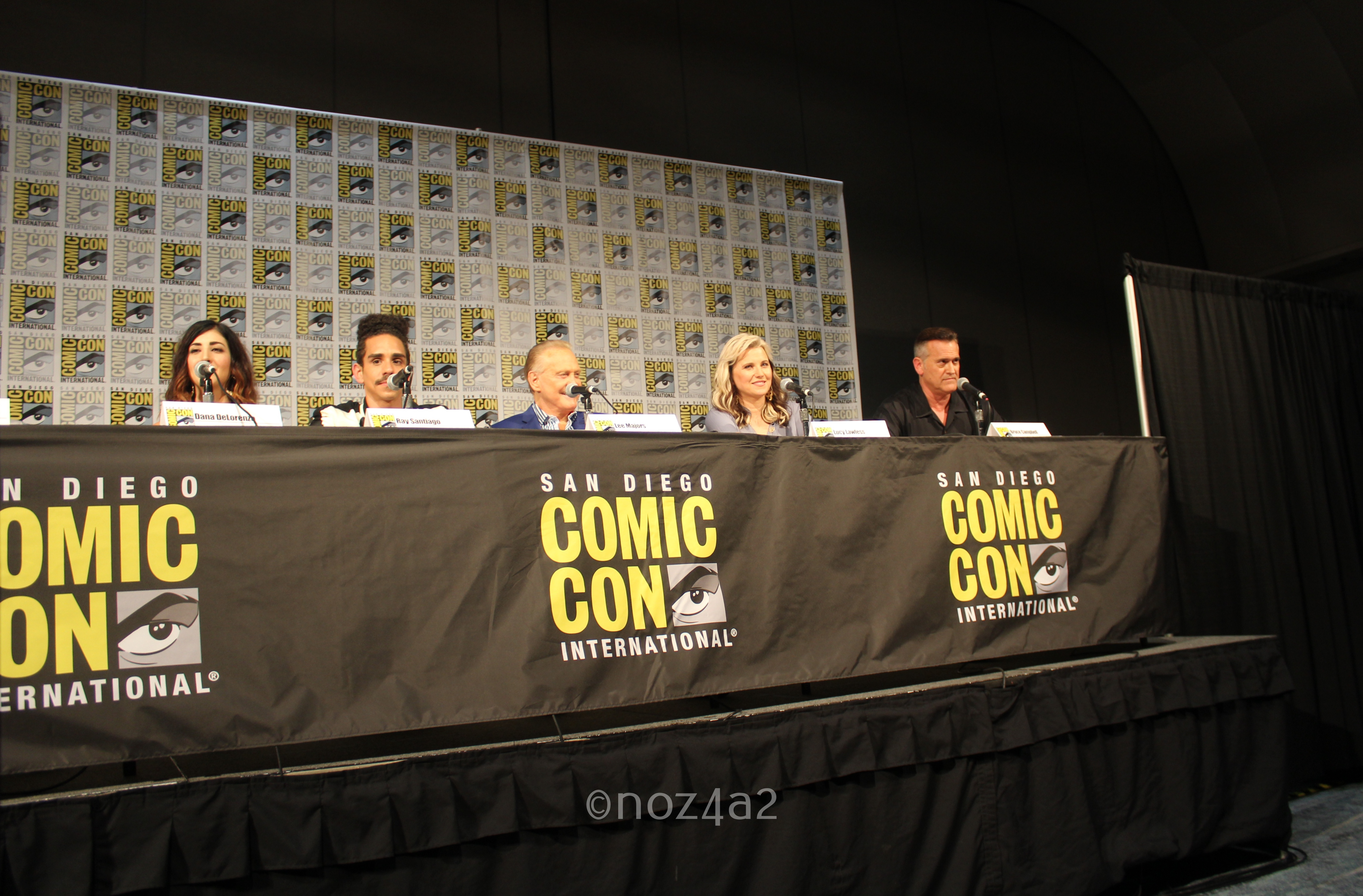 to be the Ash vs Evil Dead panel. In 2015 I missed it and was as determined as ever to get in the panel in 2016. I not only got in, but was in the front row, albeit behind a monitor, but I was able to see and get great pictures anyway.

I have always been a HUGE fan of the Evil Dead franchise, from the original movie to the campy, fabulous and oh so hilarious Army of Darkness (which Bruce mentioned is 25years old! My goodness time flies). There are several reasons I love this franchise so very much, from the writer and director Sam Raimi to the bigger than life (literally) star Bruce Campbell. I have said in the past that certain panels have been my favorite, I lied.

The Ash vs Evil Dead panel is THE BEST EVER. I have been going to Comic-con since 2012 and I can say with all the panels and interviews I have conducted, Bruce Campbell beats them all. To say he was on fire during the panel would be a gross understatement, he was like a raging inferno of hilarity. That man is a giant genius and that is no pun, but the exact truth. Dominic Patten, the moderator for that panel called Bruce “the chin that roared” which I found totally hilarious and a perfect description of him. 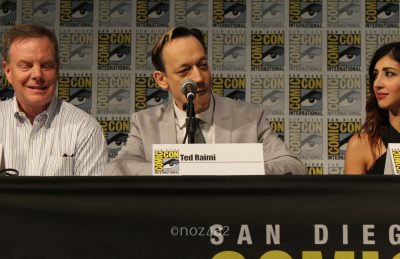 The one thing that made it even more hilarious is the fact that both Sam and his brother Ted Raimi were part of the panel, too. Bruce, Sam and Ted have a 30 year history of friendship and insanely funny anecdotes. Having a relationship for that many years and a friendship like that makes the best kind of television.

It makes the boundaries an actor go into his/her character a bit further because of the deep trust they have with the director. Add in the mix a fabulous New Zealand warrior Lucy Lawless and a television legend of Lee Majors and you have one rip roaring good series. 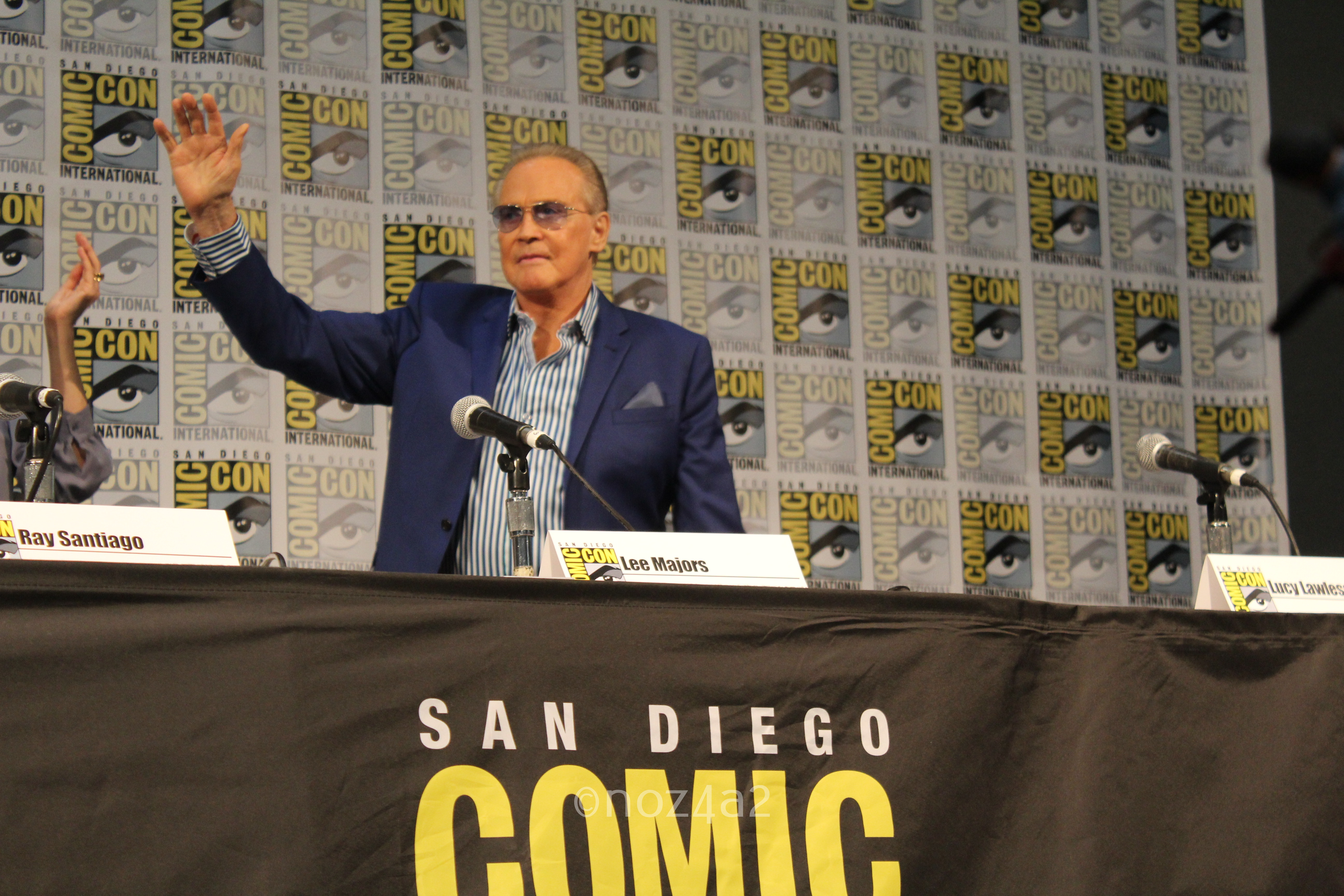 Adding a television legend like Lee Majors as Ash’s father was a stroke of genius. Who else but the Six Million Dollar Man could out “man” Bruce Campbell. I love when older television stars get to come back and be introduced to a whole new generation of viewers.

I am sure that more than half of the fans of AvsED weren’t ever born during the era of the Six Million Dollar Man. I remember watching it when I was younger and was fascinated by it. Plus the legendary stories of Lee Majors are around as well and Bruce reminds us of them. 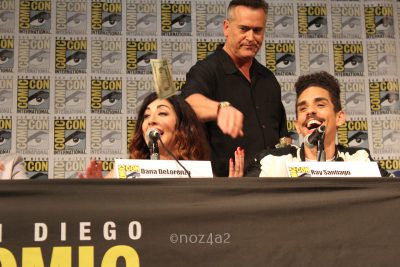 The younger cast is always a great thing, especially when they bring a different perspective to the show. I am sure being around those three legends also has some appeal as well. Learning from some of the best in the business is always a plus with the younger actors and they learned it and more in spades. Dana DeLorenzo and Ray Santiago were in complete awe of the whole Comic-con experience.

Their happiness of being at their first panel was definitely apparent and rewarded with cold hard cash. Bruce, being the insanely funny man that he is decided to reward people with $20 every time something positive was said about him. I swear he must have given out over $200. I even managed to capture a few of those “transactions”.

Bruce isn’t all comedy, he is a gifted actor, but also someone who knows how to be a part of a team. He mentioned how it was so important, as Sam had wanted, to have creative control over this franchise. STARZ gave them that freedom to do that and I applaud them for it. As someone who has been on both sides of the table as a writer, producer and actor maintaining creative control or vision is crucial. Luckily with the built in fan base, STARZ had an easy job, just say yes to what needed to be done. The network knew that if they had altered the franchise in ANY way it would have been doomed from the start. The conversation that Sam had with the network assured the viewers that there would be nothing like it on cable. A unique experience, that no one else is producing anything like it. That to me is what makes iconic television, what makes it a cult favorite and what makes it legendary. 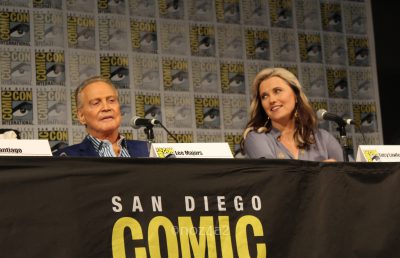 Lee Majors, legend and Bruce’s dad in the show talked about when he was first asked to be a part of the show, he said “let me watch the first episode” that lead to the second episode and then a binge watch of all 10 episodes. He had said that who knew that blood and gore could be funny? He praised Bruce as not only being a great comic actor, but a great actor in general, which he was rewarded with a crisp $20 bill. It was funny every time it happened, Bruce called it “preventative money” but I just call it genius.

One question that an audience member asked about “what advice would you give a low budget film maker to go out and do what you did to get the money for the first movie?” Of course, Sam’s answer is just perfect and something I wholeheartedly agree with. Rob Tapert had said first have a show piece to show somebody. He also said it has never been harder or easier and they still run into that problem.

Sam agreed fully with what Rob said adding that it was the trio of them (Bruce, Sam and Rob) that helped most of all. Having that foundation of friendship to help lead and guide in the same direction is crucial. Helping pick you up when you are down or help come up with the next idea of where to get the money from. As someone who has done this, I find it so amazing and quite frankly rare that this still happens. It is friendships like this that produce some of the best work. 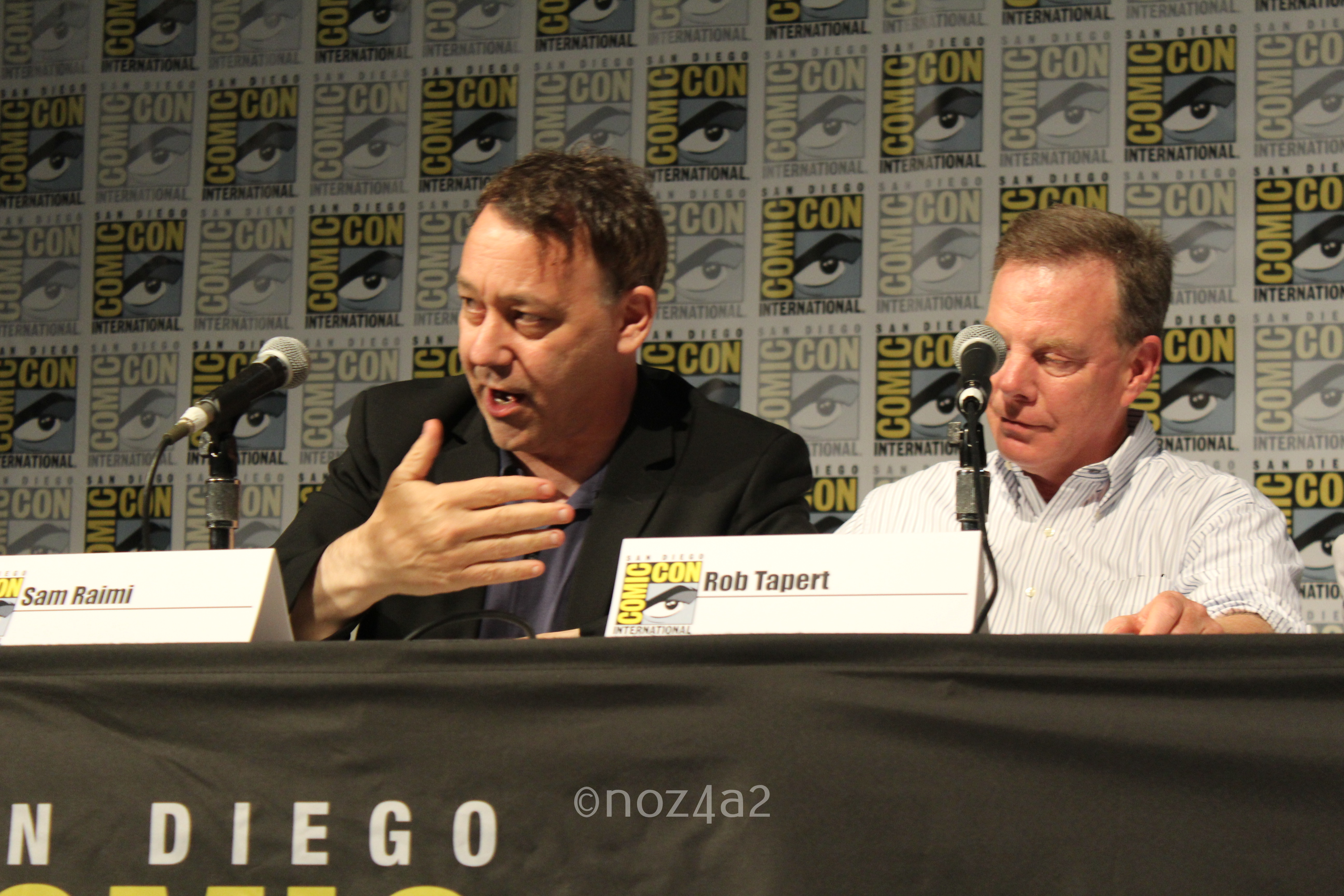 Bruce loving calls Ash the “anti-hero” he thinks the normal heroes are snores-ville. He makes a great point. I mean look at someone like Darth Vader, he is definitely an anti-hero, but his character is beloved and he is the one you love to hate. Those are the characters that always make a movie, book, TV show the best is because you can (on some small level) relate to just a glimmer of who they are.

As sarcastic and snarky that Bruce can be during the panel, you do get to see a bit of a softer side of him when he has heart felt words of praise for all the actors involved in the show. He made a particular point to say he was very happy to have his old friend Ted Raimi back on the set an acting together again. 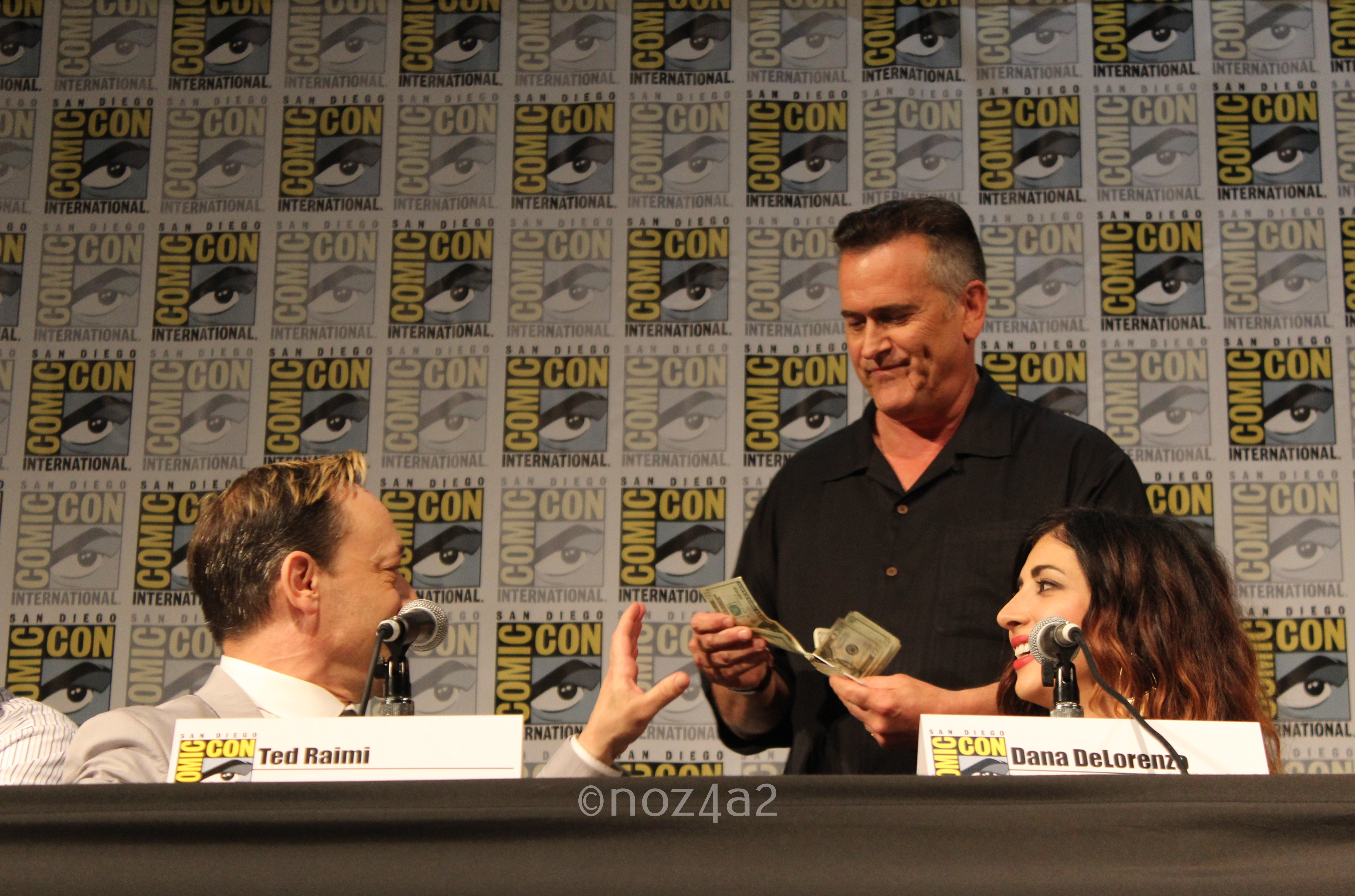 One of my absolute favorite moments during the panel is when Sam starts playfully jabbing Bruce about his career and Bruce fires back, with one of the funniest stories ever. You can clearly see how much fun these two men have had with each other over their 30 plus year friendship. They are like brothers and with that you know they have teased each other relentlessly, but all out of love. The anecdote Bruce tells is about a day he visited Sam on the set of The Quick and the Dead. What he spun next had the entire audience laughing so hard. The long story short, he put him to work in a character that gets used and abused, kicked, hit and then Sam says “we aren’t going to use any of it”. That’s friendship. To hear Bruce tell it is just brilliant, he get s so animated, you have to watch the panel to get the full gist of it.

As the panel (included below courtesy of Starz) drew to a close it was clear we all had a great time in the presence of these crazy folks. It was, as I stated before, the most fun I have had at a panel so far in my Comic-Con going experience. I hope that you will check out this incredible series and I hope you have a great time at the next Comic-Con!

Thank you for visiting WormholeRiders News Agency. And thanks to Kenn for video embedding and additional images for my report. I will be back in the near future with more on my adventures at San Diego Comic-Con 2016!

One thought on “Ash vs Evil Dead: All Blood, Guts, Laughs and Cash!”

Mon Apr 17 , 2017
Welcome Patrick Currie admirers and WormholeRiders! Some actors express themselves openly, both on and off the stage. It is sometimes called, “expressing your truth” – the displays of emotion that the character is feeling as he or she goes through a traumatic or happy experience. Actors vary in their ability […] 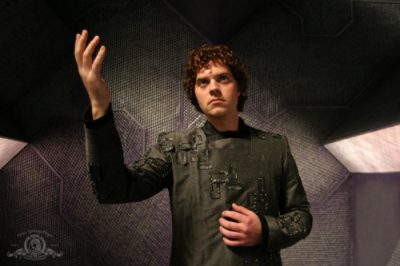