We were at the 2011 San Diego Comic-Con Guild Panel and we’re here to give you the scoop on Season 5 of The Guild (our favorite webseries about gamers)! Kim Evey (producer) and Sean Becker (director) started off the panel (the announcer mispronounced their names, which they delighted in teasing each other about-they are very good sports).

They announced that season 5 would premiere on July 26th on Xbox LIVE and on July 28, 2011  on MSN video. This season you can see episodes of The Guild two days earlier than it is released online if you have an Xbox LIVE account or a Zune account (which can be downloaded on PCs free of charge).

Season 5 finds our favorite “Guild” at a convention for “the game”. This season was shot over 15 days in four locations in four cities (much different from the previous seasons) and included 70 actors and 263 extras! All this was done with a fraction of the crew members a television show would have. Sean and Kim announced, “ Felicia Day is trying to kill us!”. 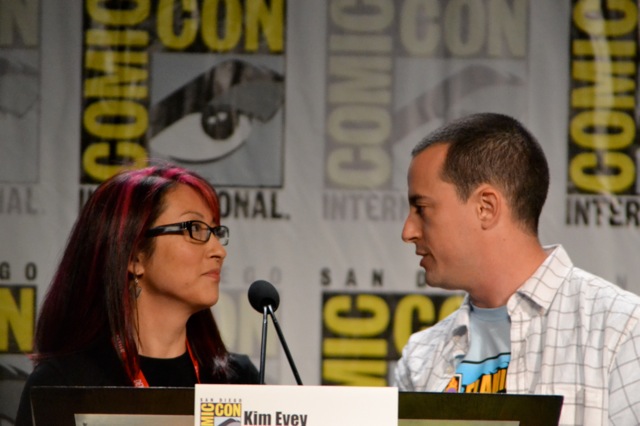 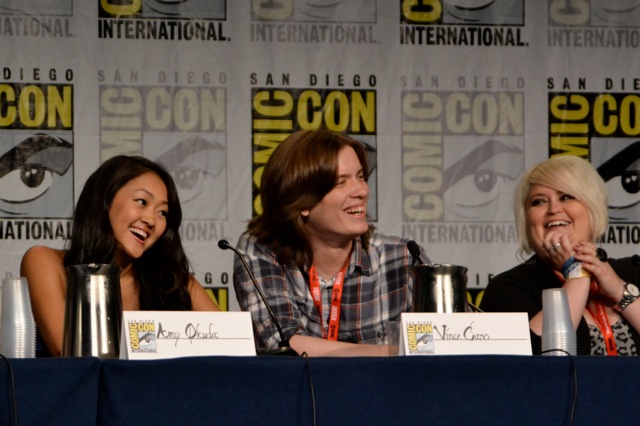 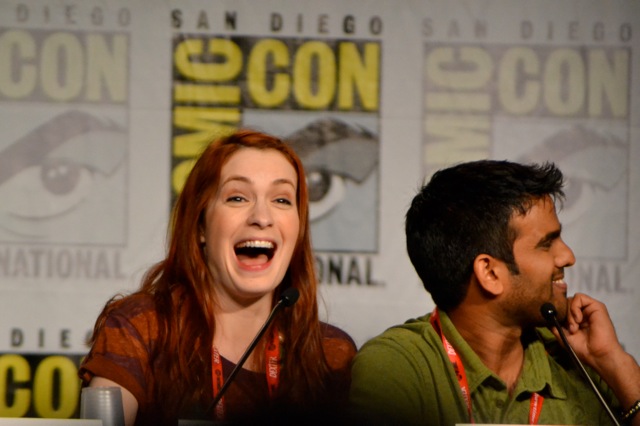 Felicia had some pretty exciting announcements for us:

QMx is creating maquettes for The Guild.

The Guild is getting a Munchkin Pack.

There will be special edition Jones Soda featuring each of The Guild characters.

There will also be The Guild Trading Cards done by Cryptozoic Entertainment.

We will also be getting more comics from The Guild’s partnership with Dark Horse Comics. Clara’s comic will be released in September. 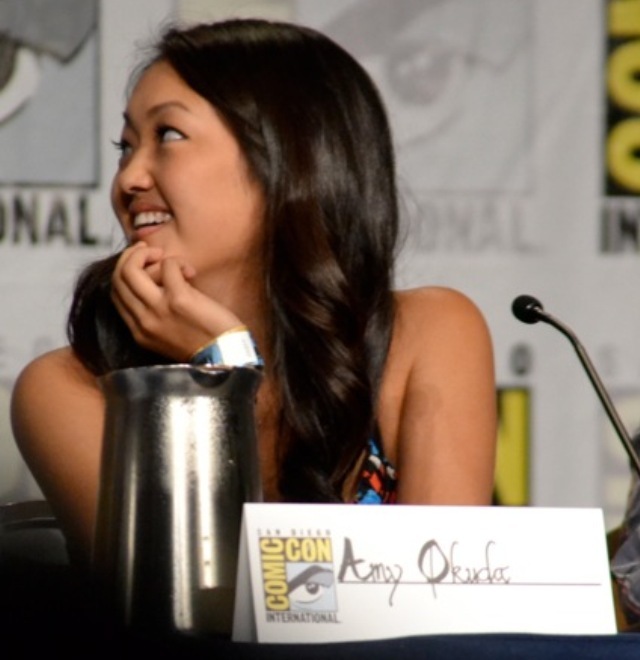 Amy talked about Tink’s comic being a precursor to what we will see on Season 5! Amy seemed afraid to talk about her character this season and Felicia confirmed it was because they are all afraid of Felicia ;). Sandeep even revealed that they were all chained together under the table (they can only get away with this because Felicia is such a sweetheart)! There is obviously a lot of love going on between the cast and they were all genuinely excited to be there with so many people in the audience. 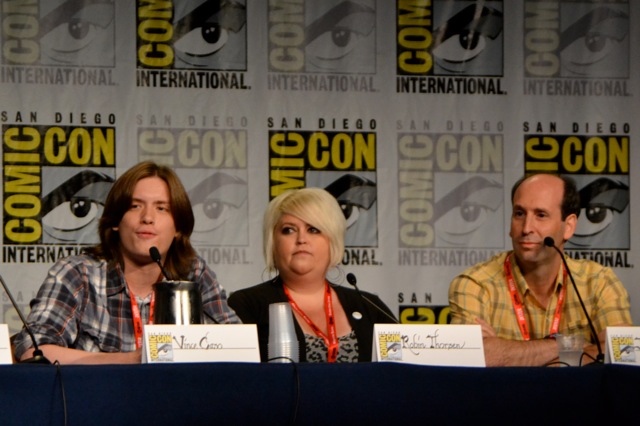 Vince mentioned how he “loved” how much of an idiot Bladezz seems to be in his comic and that it’s pretty fun to be in a comic book.  Jeff also enjoys being immortalized as a comic book character and said he takes friends who don’t know he’s in a comic to the comic book store, casually directs them to his comic, and then watches them freak out when they see it. 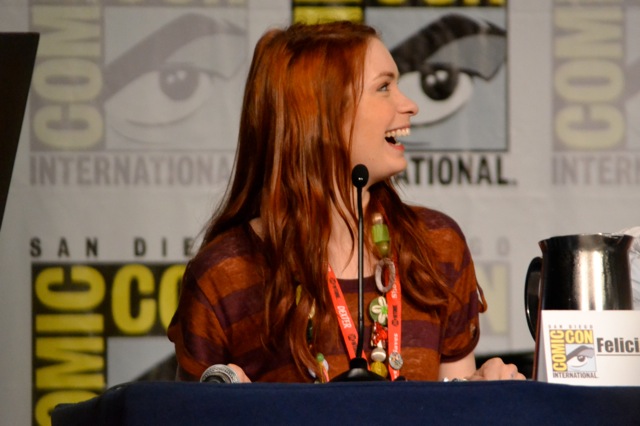 Unlike season 4, when Felicia had writer’s block, season 5 came easily to her and she wrote the script in seven days while on vacation in Hawaii. Due to the large number of speaking parts this season she was able to write parts for her favorite actors. She told us about a few exciting cameos we will see: Erin Gray, Doug Jones, & Maurissa Tancharoen!

Will we be seeing a new music video soon? They haven’t made one yet but will hopefully get to do something later in the year and Felicia already has a really great idea for one. YAY! 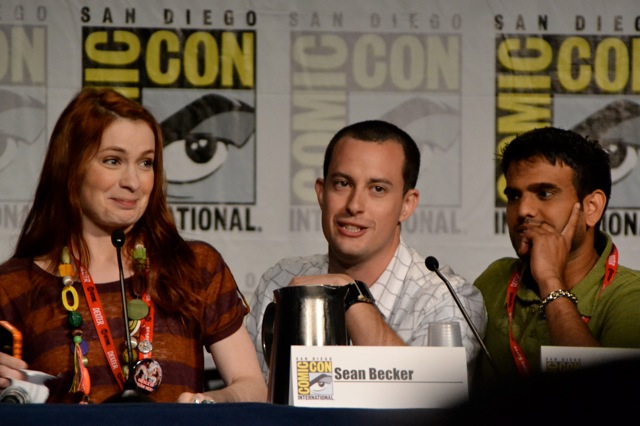 Felicia asked anyone who was an extra this season in the audience to stand and she thanked them for helping make season 5 look like a real convention. As extras, we really appreciated this gesture. It was truly our pleasure to be part of this amazing show.

Next, it was time for the world premiere of the first episode of season 5! They showed an amazingly hilarious recap of seasons 1-4 (by Randall, the guy who does the Honey Badger YouTube video!) to catch us up, and then the episode! It was so awesome to watch the episode in a room with thousands of fellow Guildies! We can’t wait to see what the rest of season 5 has in store! 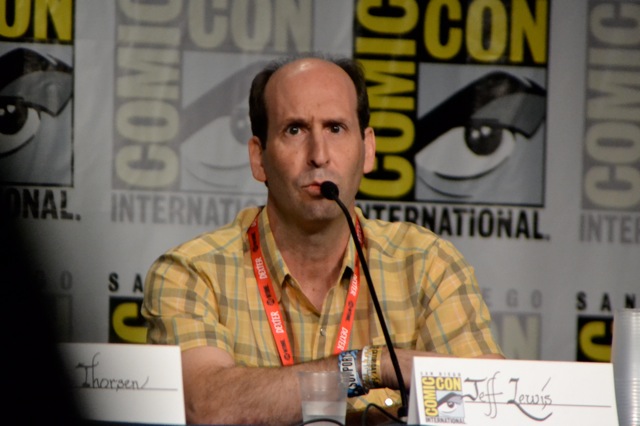 The panel concluded with a question about more cross-overs between Jeff Lewis 5 minute Comedy Hour and The Guild. Jeff said he would love

them all to be in his show. Let’s hope that this happens! If you want to support Jeff’s show, here’s the link to his Kickstarter (be sure to check out the hilarious rewards): 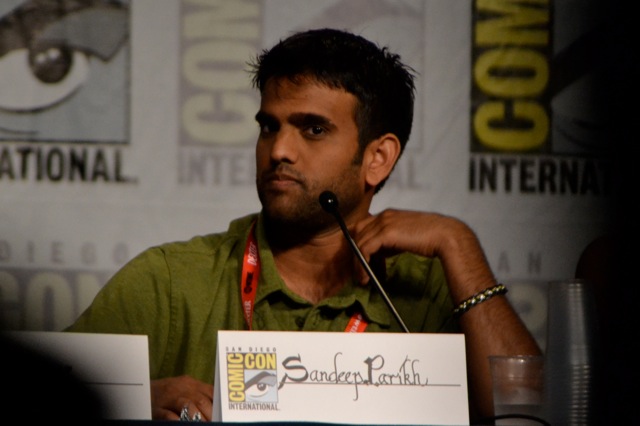 After the panel (with several thousand people in the audience), at least 80% of the audience left! It was so satisfying to see such a turnout of people who were obviously all Guildies!

Check our video of the panel below (apologies for the shaky part at the beginning- I was having trouble getting the right angle) and watch for Sean’s hilarious answer to the question of what the biggest challenge shooting this season was.

One thought on “The Guild Panel at San Diego Comic-Con 2011!”

My San Diego Comic Con Adventure: Panels and Beyond!

Wed Aug 17 , 2011
This year was my third year at Comic Con, and it was by far the most fun I have ever had! The previous two years had finally prepared me to take full advantage of all that Comic Con has to offer. Rachelle and I managed to pack in panels, celebrity […]